Forget Donald Trump and Kim Jong Un. Here’s Why the People of North Korea Are the Real Solution

Over the last 13 years, I have met hundreds of North Korean refugees, and spoken with some who had left their homeland just days prior. In the early years, nearly every refugee left because of hunger and a fear of starving to death.

But recent trends have shown a steady shift in reasons for defection. More people are risking their lives to escape out of hunger not for food, but for freedom, as information from beyond North Korea’s borders has found its way into the country and people have begun to realize how constrained and deprived they have been.

Read more: The Trump-Kim summit is a tragedy for the North Korean people

What I’ve learned from North Korean refugees is that North Korea is changing in ways that many in the outside world do not know. What started as survival entrepreneurialism during the devastating famine of the 1990s has grown into a full-blown capitalist economy, complete with de facto privatized production, competing bus and taxi companies, and individual investment. A generation of young North Koreans have unprecedented access to foreign information and media. They secretly trade USB sticks loaded with South Korean films and TV programs that stir their curiosity and challenge the regime’s propaganda, eroding North Korea’s information blockade.

North Korean refugees consistently tell us “there is nothing that money can’t do in North Korea.” They are referring to a culture of corruption that is so pervasive and assumed that it undermines the legitimacy of the system and the government’s authority. This has reinforced the belief among citizens that you have to break the rules not only to survive but to thrive—emboldening small forms of everyday disobedience.

These changes are irreversible and are being driven by the North Korean people at a grassroots level, creating pressure from the bottom up. The North Korean government has shown itself to be sensitive to these internal pressures and has demonstrated that it can react in both resistant or adaptive ways, but increased pressure from the bottom up will continue to force the government to find ways to respond, adapt or face the potential of more forceful change.

Read more: 11 photographers who traveled to North Korea reflect on the pictures that moved them most

These internal changes are also shifting North Korean leader Kim Jong Un’s policy calculus, and may be behind his new engagement with the outside world. As a market economy and mindset grows in North Korea, and people are increasingly aware of their backwardness compared to the rest of the world, the pressure on Kim Jong Un to allow real economic development is growing. He also faces a fundamentally different calculus from his father due to his young age. He knows he has to have a long-term strategy to maintain enough support from both elite and ordinary North Koreans, likely for another four or five decades.

The world deals with North Korea as a security problem rather than a country that creates security problems. This approach fundamentally does not address the underlying cause but merely the symptoms. When we focus narrowly on nukes and missiles, we are also playing into the strengths of the North Korean government that has shown itself to be confident and capable when playing the game of international security, as we saw in the recent summit.

Read more: What it’s like to escape from North Korea

We must stop dealing with North Korea as just Kim Jong Un and nuclear weapons and instead see it as a country of 25 million people; not brainwashed automatons but resilient, entrepreneurial and increasingly empowered people who have overcome incredible challenges and are also driving important changes within the country.

We need to be on the side of the North Korean people. And in our engagement with North Korea we should not only manage security problems but also push the country in the direction of further change and opening, empowering the North Korean people to have growing influence in Pyongyang’s policy decisions. This is the only way to lock Kim Jong Un into a sustainable pathway of economic growth and positive engagement with the international community. 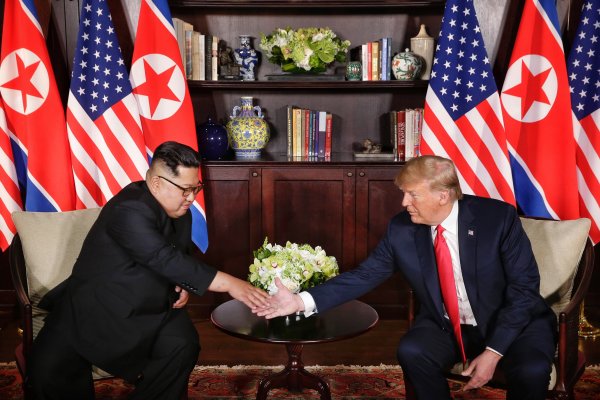 This Is What Trump Needs to Do to Make North Korea Get Rid of Their Nukes
Next Up: Editor's Pick