Ending War Games With South Korea Isn't a 'Stunning Concession.' It's the Best Thing to Come Out of the Summit So Far

“A stunning concession.” That was the consensus of the world’s media gathered in Singapore for the U.S.-North Korea Denuclearization Summit, after President Donald Trump announced that the U.S. would halt all military exercises with South Korea, including the nuclear war games.

At times, Singapore felt more like a blockbuster diplomatic reality TV show than a summit about nuclear weapons. But when it came to Trump’s decision to stop the “very provocative” war games, the commentariat’s framing of it as a sign of weakness was shocking—and dangerous.

The subtext is that Trump was giving up something valuable and necessary, something he should be reluctant to relinquish.

Read more: The North Korea summit gave Trump a genuine victory. But China may benefit most

To understand how misguided this approach is, let me paint a picture of what those “war games” entail. Each year, South Korea and the United States send a message to the North Korean regime by rattling a massive sabre—large-scale simulated invasions, conspicuous displays of firepower and combined ground, air and maritime movements. The whole thing is designed to leave the North Koreans with no doubt about what would happen in a conflict.

They also include simulated nuclear attacks and deploying strategic nuclear bombers that would be used, along with long-range nuclear missiles, to wipe North Korea off the map in the event of any conflict.

By saying he would discontinue this practice, Trump is in effect offering to stop the simulated mass murder of innocent civilians. Plain and simple. Don’t let the obfuscatory military language sugarcoat this: when you send a nuclear bomber on a “dry run,” you are practicing the military tactic of indiscriminately murdering innocent civilians.

Does this sound like an acceptable military tactic in 2018? What if, instead of nuclear weapons, Trump had given up the option of releasing sarin gas into the schools and hospitals of Pyongyang? Would that be a significant concession too? We shouldn’t treat nuclear weapons any differently.

Most of the world would agree. They reject nuclear weapons as abhorrent humanitarian disasters. Last year, 122 states at the U.N. adopted the Treaty on the Prohibition of Nuclear Weapons (TPNW). The treaty was created to facilitate global nuclear disarmament through the delegitimization of nuclear arms. Reacting to Trump’s announcement as a “stunning concession” only further legitimizes these weapons.

I was in Singapore for the summit this week to advocate for the Treaty to be the most appropriate instrument used for Korean denuclearization. The Treaty doesn’t tweet, it doesn’t change its mind on the plane home, and can’t have its ego bruised. It’s the only comprehensive, verifiable and irreversible way to achieve meaningful nuclear disarmament.

To fully denuclearize the Korean Peninsula, South Korea would have to opt out of the U.S. nuclear umbrella. They would not have to end their military alliance with the United States—the Treaty does not prohibit military cooperation with nuclear states, but it does prohibit any public support for nuclear weapons or their retention. South Korea could continue to rely on U.S. extended deterrence, but not extended nuclear deterrence.

Nuclear war does not respect borders. Any “limited” nuclear attack on Pyongyang would blanket Seoul in deadly radiation. Recent climate modeling shows that a relatively limited nuclear exchange would result in a nuclear winter lasting 2-3 years. Beyond the unacceptable immediate deaths from nuclear weapons, millions more would die from radiation exposure and resulting famine. The food system would collapse and chaos and death would follow.

That’s why it is essential the solution crosses borders too, through the framework of international law. The TPNW is the internationally recognized, treaty-based pathway to comprehensive, verifiable and irreversible denuclearization. It won’t unravel if a government changes or one leader gets cold feet or takes offense, unlike a bilateral solution.

Any nuclear weapon, anywhere, possessed by any nation, is an unacceptable threat to all nations. Starting with the latest nation to posses nuclear weapons, North Korea, we can begin to unravel the anachronistic security framework of the constant threat of mass extinction. Starting that with the cessation of U.S.-South Korea war games—that is, practicing the mass murder of innocents—is a good way to get the ball rolling.

It is not a concession, it is not a valuable thing to give up, it is not right. There is no weakness in giving up something that the majority of nations have decided is illegal in the first place. The Koreas must now join them. 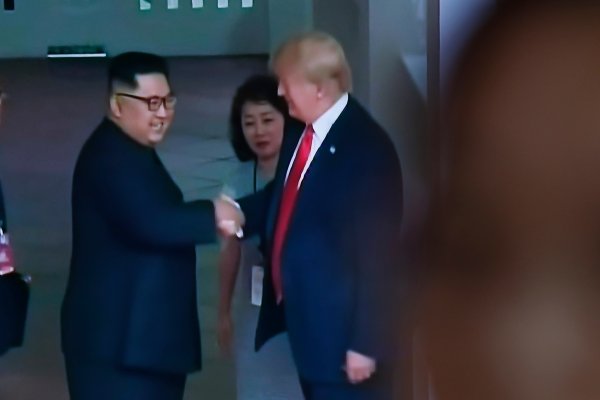 Meet the 'Unsung Hero' Who Interpreted for Trump and Kim Jong Un
Next Up: Editor's Pick