Ideas
By Kelsey Davenport
Davenport is the Director for Nonproliferation Policy at the independent, nonpartisan Arms Control Association.

The handshake between President Donald Trump and North Korean leader Kim Jong Un will go down in history. But it’s not yet clear if the summit will produce an equally historic outcome on denuclearization.

Despite Trump’s attempts to sell the summit document as a breakthrough, it reiterates a boilerplate commitment to “complete denuclearization of the Korean peninsula,” a pledge that North Korea has made, and broken, before. This vague, aspirational language is a long way from the “comprehensive document” described by Trump in his press conference following the summit.

However, it is premature to write the meeting off as a meaningless photo opportunity. In addition to an estimated 15-20 nuclear warheads, North Korea has developed a substantial infrastructure for producing fissile material for nuclear weapons and ballistic missiles that can target the United States. Halting, reversing, and ultimately rolling back Pyongyang’s nuclear weapons program was never going to be a quick process, solved in a single meeting. The true test of success lies in what follows. It will be the concrete steps toward denuclearization—or lack thereof—that will determine if the summit was a success or failure.

The United States must capture the momentum from the Trump-Kim meeting and capitalize on the summit document’s commitment to establish relations by holding follow-up negotiations. That could jump start a meaningful process that leads toward real denuclearization. If the Trump administration fails to take this opportunity, there is a real risk that Kim will pocket his meeting with the U.S. president as a political win and drag his feet on further steps to halt and roll back his nuclear and missile programs.

A key first step in follow-up negotiations is to hammer out the details of what “denuclearization of the Korean peninsula” constitutes. Ambiguity over the objectives and terms has derailed past talks with North Korea. Agreeing on a definition early in the process reduces the risk of a repeat failure and sets clear expectations over what the process will, and will not, accomplish.

U.S. policy has consistently defined denuclearization as the complete, verifiable, irreversible dismantlement of North Korea’s nuclear program. This is a lofty goal that will likely take years to accomplish, but it is a comprehensive approach that rightly sets the bar high. To meet these requirements North Korea would have to dismantle its nuclear warheads, means of producing nuclear materials, and nuclear weapons research facilities, and submit to unprecedented monitoring and verification measures. Realizing this process will take years, and will likely be divided up into steps. Even if these steps fall short of North Korea relinquishing its nuclear weapons, halting and rolling back North Korea’s nuclear and missile programs in a verifiable manner would benefit U.S. national security and help stabilize the region.

On the other hand, North Korea’s definition of denuclearization is vague and often includes references to U.S. nuclear weapons in the region. Though the United States removed the last of its nuclear weapons based in South Korea in the early 1990s, the country remains under the protection of the U.S. nuclear arsenal. Pyongyang may also try to exempt some of its nuclear facilities from any agreement by labeling them as a part of a peaceful, civil program.

These discrepancies underscore the importance of clarifying early in the process what “denuclearization of the Korean peninsula” constitutes, in order to define the scope of the talks and manage expectations.

After closing the gap between the United States and North Korea on the definition of denuclearization, the Trump administration must focus on specific, verifiable steps that Pyongyang will take to reduce the threat posed by its nuclear weapons. Initial actions could include locking in a freeze on nuclear and missile testing and halting fissile material production. These steps would ensure that North Korea cannot expand its arsenal while talks continue.

North Korea is unlikely to take further actions to halt and roll back its nuclear weapons program without security assurances from the United States. Pyongyang has long cited “U.S. hostile policy” toward North Korea as the rationale for retaining nuclear weapons, and until the regional security situation shifts and the benefits of giving up nuclear weapons outweigh the perceived threat, denuclearization will remain unlikely.

The Trump administration made a positive step by recognizing that denuclearization and “providing the security assurances Chairman Kim will want” must go hand in hand, but the president’s surprise announcement at the summit that the United States would halt all joint military exercises went a step too far. Playing this card at the summit before North Korea agreed to any specific reciprocal commitment is a big win for North Korea. While Trump said he would resume the so-called war games if the talks collapse, the United States can no longer use the halting of exercises as an inducement down the road.

Going forward, it is critical that the Trump administration walks the fine line of offering reciprocal actions in return for concrete steps by North Korea, while retaining enough leverage to see the process through.

If early results are not fully satisfactory, Trump must resist the urge to abandon diplomacy and to return to irresponsible threats. Nine months before Trump and Kim sat down in Singapore, the two leaders were trading insults and threats, raising the prospect of a catastrophic military conflict in the region. The summit kept this at bay, and aborting talks prematurely would only reinforce North Korea’s incentive to further its nuclear and missile activities to deter what it sees as U.S. aggression.

Equally risky is the prospect of declaring “mission accomplished” too soon. Trading away economic and security concessions for a weak deal with inadequate verification will only embolden North Korea and enable it to continue developing its nuclear arsenal.

It is critical that the Trump administration does not lose sight of the goal—a comprehensive, verifiable nuclear agreement that blocks North Korea’s pathways to nuclear weapons.

Denuclearization is a long-term process. Trump can’t play too many cards up front. 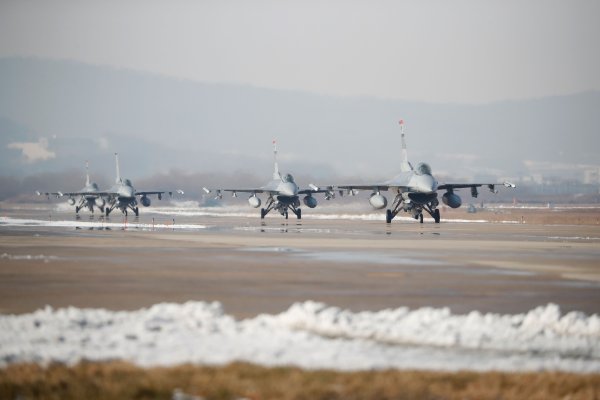 Ending War Games With South Korea Is the Best Thing to Come Out of the Summit So Far
Next Up: Editor's Pick