The Best Place to Build a James Bond Museum? On a Mountaintop in Austria, of Course

A new museum honoring James Bond located in the Austrian Alps will let visitors immerse themselves in a world of international espionage and intrigue.

The museum, 007 Elements, is an experimental installation dedicated to the fictional British secret agent and will open next month, CNN Travel reports. It also boasts a cinematic location, atop the Gaislachkogl mountain in Sölden, Austria and next to the ice Q restaurant, which appeared in 2015’s Spectre.

The museum will be accessible via cable car.

“It’s an authentic James Bond movie location, it’s inside the top of a mountain at 3,000 meters up in the air,” creative director Neal Callow told CNN. Callow also worked as an art director on the Daniel Craig-led Bond films Casino Royale, Quantum of Solace, Skyfall and Spectre.

“We were looking for a perfect environment… somewhere high in the mountains with a unique, modern piece of architectural style,” Callow added.

Designed by architect Johann Obermoser, the striking, glass and concrete edifice is “not a traditional museum,” according to Callow. It’s built into the permafrost of the mountain and regulated at 1 degree Celsius (33.8 degrees Fahrenheit), and comprised of multi-sensory galleries with names like “Barrel of the Gun,” “The Lair,” and “Tech Room” that will allow visitors to wander through immersive audiovisual exhibits. There are also classic props and paraphernalia, including a full-scale airplane from Spectre.

Daniel Craig will reprise the role in his fifth Bond film, the 25th in the series, which is slated to reach theaters in November 2019. Until then, fans will have to fly to Austria to experience a Bond adventure. 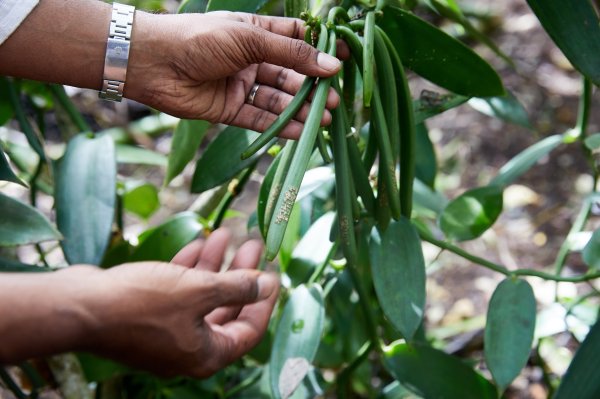 Vanilla Is Nearly as Expensive as Silver. That's Bad for Madagascar
Next Up: Editor's Pick