New Zealand’s Jacinda Ardern Is About to Take Maternity Leave. Why That’s a Good Thing for Both Women and Men

New Zealand is readying for the arrival of its newest member of the executive wing: the first child of Prime Minister Jacinda Ardern.

The 37-year-old leader has returned home to the Auckland area to prepare for the birth of her baby, which is due on Sunday. Once the baby is born, Ardern will take a six week leave from office, making her the first elected leader ever to take maternity leave.

“There is a level of excitement because it is novel and because it’s really rare to see this globally. It’s quite a big moment,” says Dr. Jennifer Curtin, a professor of politics and international relations at the University of Auckland. “But also this happens in a year when the focus has been on how far women have come in this country.”

Indeed, New Zealand is ahead of the game when it comes to gender parity. Two women, Helen Clark and Jenny Shipley, have already held the Prime Ministerial post in the past. The South Pacific nation has one of the lowest pay gaps in the world, and it prides itself as the first country to have established women’s suffrage in 1893 — the 125th anniversary of which is being celebrated this year.

“We had mania when she first became leader, ‘Jacinda Mania,’” says Curtin. “We will see the equivalent once the baby arrives.”

That ‘Jacinda Mania’ was evident when Ardern first announced her pregnancy in January — just two months after her center-left government came to power — and when, while visibly pregnant, she wore a traditional Maori cloak known as a korowai to meet Queen Elizabeth II.

Ardern has been dubbed a trailblazer. Not least because her partner and father of the baby, Clarke Gayford, will assume the role of full-time dad while she leads the country. But the world’s youngest female leader is steadfastly calm about the baby mania and has has regularly downplayed the hype and rejected the ‘wonder woman’ labels.

Ardern, who once served as a policy adviser to former British prime minister Tony Blair, has never hesitated to fire back at undue questions around motherhood. When a radio show host said employers should know whether their female employees plan to have children, Ardern famously snapped back. “It is totally unacceptable in 2017 to say that women should have to answer that question in the workplace,” she said on the live radio show. “It is a woman’s decision about when they choose to have children, and it should not predetermine whether or not they are given a job or have job opportunities.” And in January, Ardern said, “I’m just pregnant, not incapacitated.”

Curtin says that those questions “heightened the importance of maternity leave and have women know they could come back to work without being pigeonholed.”

New Zealand’s government is currently moving forward with a measure to extend paid parental leave from 22 weeks to 26 weeks. In the U.S., workers are eligible for 12 weeks of unpaid leave. But American mothers are not entitled to any paid leave, making the U.S. the only country in the developed world that does not require employers to provide paid leave.

Even with the baby due this weekend, Ardern is traveling and making regular public appearances, and has said will not give up office until en route to the hospital. Once she goes on maternity leave, deputy prime minister Winston Peters will assume the role as acting prime minister. Peters will oversee day-to-day government with her chief of staff liaising. Ardern will still receive cabinet papers, be “fully contactable,” and resume her full duties after the leave period.

She may not see herself as a trailblazer, but Ardern is redefining the relationship between families and the workplace, and it could have encouraging results for both women and men. 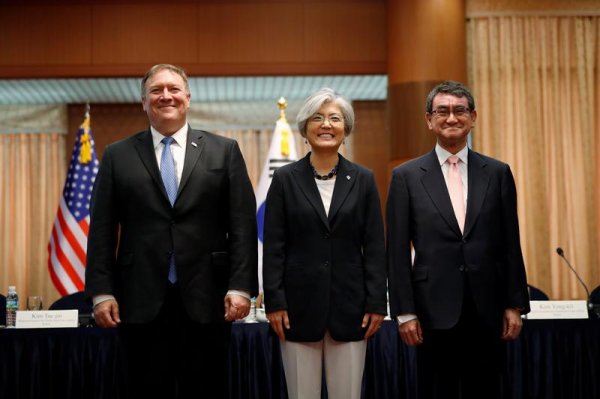 Pompeo Says Sanctions Will Remain on North Korea
Next Up: Editor's Pick