Your Ultimate Guide to Watching the 2018 World Cup

The soccer World Cup kicks off Thursday in the 81,000 seater Luzhniki stadium in central Moscow. Host country Russia, ranked 70th in the world, take on 67th-ranked Saudi Arabia at 6 p.m. local time (11 a.m. ET). While unlikely to be a match for the history books, it does mark the start of the first World Cup in eastern Europe. The games will be played across 12 stadiums, spanning a huge distance—with the most eastern in Ekaterinburg, 1,800 miles east of the stadium in Kaliningrad, Russia’s European territory that borders Poland and Lithuania.

With 64 matches over four weeks, there are likely to be surprises—especially with video assistant referee (VAR) technology making its World Cup debut after a widely criticized outing in the 2017 Confederations Cup. Here, a cheat sheet of what else to watch out for in this year’s tournament.

The favorites and the challengers

The only South American team to win a World Cup on European soil was Brazil in 1958. This year, there are five teams from South America in contention. Brazil, Uruguay, Argentina and Colombia all look likely to make it out of their groups, with Peru the underdog. With Brazil’s Neymar looking in form after returning from injury and scoring in both warm-up friendlies against Croatia and Austria, the Brazilians could live up to their tag as tournament favorites.

France and Germany are both considered strong challengers to the South Americans, especially playing closer to home. But with Germany’s surprise decision to leave star winger Leroy Sané at home and a loss to Austria in a pre-tournament friendly, France could have the edge. A young squad bursting with raw talent, like forwards Nabil Fekir and Kylian Mbappé, has the best chance in years of bringing Les Bleus their second ever World Cup.

This tournament is likely soccer superstar Cristiano Ronaldo’s last shot at winning a World Cup. The 33-year-old Portuguese captain has won the European Champions League five times with two teams and set scoring records, yet the World Cup trophy remains elusive. Leading fourth-ranked Portugal to victory would cement his place as one of the game’s greatest players of all time.

Cristiano Ronaldo of Portugal in action during the friendly match of preparation for FIFA 2018 World Cup between Portugal and Algeria at the Estadio do Sport Lisboa e Benfica on June 7, 2018 in Lisbon, Portugal.
Quality Sport Images—Getty Images

Egypt wasn’t considered to be a team to watch even when it last played in a World Cup, 28 years ago, but since Liverpool’s Mohamed Salah powered his way to become one of the top three goal scorers in Europe, it is attracting fresh attention. The team is already set to break one tournament record: fielding the oldest player ever to play in a World Cup. Goalkeeper Essam el-Hadary, 45, is set to captain his side. He told ESPN the milestone meant little, since “age is just a number.”

Teams for the neutrals

Although Iceland may have pride of place as tournament underdogs, Nigeria is emerging as another popular choice. According to the Nigeria Football Federation, the Super Eagles’ distinctive white, green and black patterned jersey had 3 million preorders, and London’s Nike store sold out after fans had lined up for hours. The country is hoping for a best-ever performance after finishing ninth in 1994.

Detail of the Nigeria badge and shirt during the international friendly match between England and Nigeria at Wembley Stadium on June 2, 2018 in London, England.
Catherine Ivill—Getty Images

Away from the stadiums, soccer officials are hoping the host nation can avoid a resurgence of soccer hooliganism. At the European Championships in 2016, Russia’s fans violently clashed with British fans in the city of Marseilles. Russia says it has created a blacklist of “known troublemakers,” reportedly of almost 2,000 people and plans to deploy hundreds of police on the streets to dispel violence. Still, fans are bracing for trouble. The British Foreign Office has warned citizens traveling to Russia to watch out for “anti-British sentiment or harassment.”

If you only pay attention to soccer every four years, you might be wondering who the U.S. is playing. Alas, the United States men’s national soccer team failed to qualify for the 2018 World Cup, prompting much soul-searching and anger at the controversial goal that let Panama proceed instead. There’s a silver lining in the form of a squad of rising stars like Christian Pulisic and John Brooks, who are young enough to be dreaming of a resurgence in 2022. And the Americans are at least in good company: four-time winners Italy also failed to qualify. 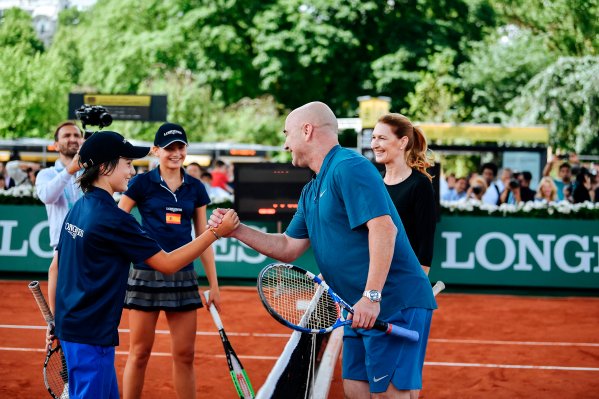 Andre Agassi Says These Are the Tennis Players to Watch
Next Up: Editor's Pick