Lawmakers Are Hesitant to Judge the North Korea Summit Just Yet

The White House has extolled President Donald Trump’s Singapore meeting with Korean leader Kim Jong Un as the “historic” opening of a new chapter in diplomacy. Eight thousand miles away, lawmakers on Capitol Hill were a tad more measured.

As Trump made his way back to Washington, the prevailing sentiment among members of Congress on Tuesday morning was one of hesitant optimism. Many acknowledged the symbolism of what had happened overnight but were reluctant to guess what it meant for the future of the relationship between the two countries.

“The one thing we do know is North Korea came out a winner,” Democratic Sen. Mark Warner of Virginia said. “Kim Jong Un got what the regime’s been looking for since the Korean War — a meeting with the President of the United States on equal footing.”

Trump agreed to end joint military exercises with South Korea, describing them as “war games.” But the summit had originally been proposed as an effort to get North Korea to end its nuclear weapons program, and the U.S. president received only vague promises from Kim that North Korea would work to eradicate its nuclear arsenal “relatively quickly.”

Trump’s supporters in Congress stressed that the sheer occurrence of the summit was an unprecedented coup, and that it laid the foundation for future negotiations.

“It’s just miraculous what took place,” Republican Sen. James Inhofe of Oklahoma said. “You guys in the media don’t like him to start with, so you don’t see it that way, but just to be able to sit down and talk to the guy in a very civil way and come up with agreements — I just think it’s great.”

But other members of the GOP were hesitant on the idea that pausing war games might lead to a diminishment of the U.S. military presence on the Korean peninsula. (There are currently around 35,000 U.S. troops there, and 40,000 in nearby Japan; Asia-minded hawks have long stressed the importance of this presence as a bulwark against the Chinese military.)

“We’ve still got China out there,” Inhofe said. “That’s why we’ve got to keep the troops.”

Other Republicans suggested that the White House work with Congress to reach a diplomatic solution.

“We need to see what he’s proposing first,” Republican Sen. Joni Ernst of Iowa said. “There are simply no details. I’d like the president to have discussions with us.” The summit, Ernst says,”was successful, but as far as moving troops off the Korean Peninsula — I think we need to stay there. We don’t just withdraw our troops.”

Trump returns to Washington with a symbolic accomplishment on his report card, but lawmakers will now watch closely to see how the goodwill expressed between the two heads of state will translate into practical solutions.

“We certainly want this to succeed — this framework to eliminate the nuclear program — and I strongly support the use of diplomacy to accomplish that,” Democratic Sen. Ben Cardin of Maryland said. “Kim Jong Un has made these commitments before, and he’s not lived up to it, so we really need to see action before we start making concessions.”

He continued: “We also have to recognize that before we can have a normal relationship with North Korea it’s more than just its nuclear program. It’s human rights violations and other issues.”

“In terms of what America and the West got,” added Warner, “I think it’s too early to tell. For the sake of peace, I wish this Administration well, but to quote Ronald Reagan, trust but verify.” 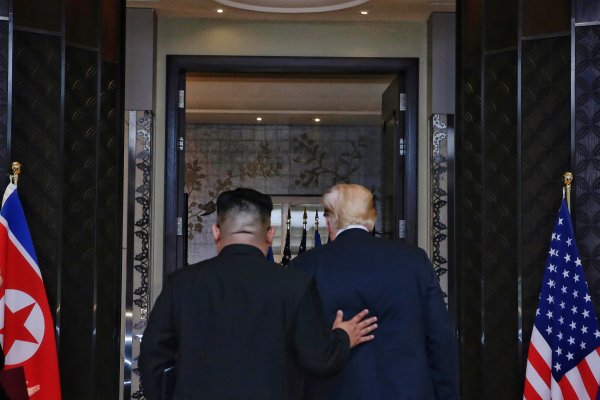 How Trump Successfully Cleaned Up North Korea's Brand
Next Up: Editor's Pick