How One Migrant Ship Became a Symptom of a Sick Europe

A 253-feet long, 2,000-ton boat makes for an ungainly political football, especially when it is carrying some 629 desperate migrants and is staffed by a crew of angry humanitarian workers. But since Saturday, when the MV Aquarius, a search-and-rescue vessel operated by Médecins Sans Frontières (MSF) and European NGO SOS Méditerranée, came to the aid of several dinghy-loads of imperiled migrants who had set off from the Libyan coast for Europe, the boat has become a symbol of the continent’s most intractable crisis. That wouldn’t be the plight of the migrants, which is indeed dire, but rather the inability of the European Union to tackle an issue that threatens to tear the bloc apart: what to do about the migrants and refugees who are willing to risk everything, even their lives, to reach European shores.

Read more: Inside a week on a refugee recovery ship

As the Aquarius approached Italian waters on June 10 to offload its human cargo, as it has done hundreds of times since commencing search and rescue operations two years ago, newly appointed Italian deputy Prime Minister and Interior Minister Matteo Salvini decided that it was time to take a stand. Using the hashtag #closethedoors, Salvini tweeted that Italy would not be turned into a refugee camp. “Italy is done bending over backwards and obeying, this time THERE IS SOMEONE WHO SAYS NO.”

For Salvini, it did not matter that the Italian Coast Guard, which had overseen the rescue operations, directed the Aquarius to Italian ports, nor that there were seven pregnant women, 123 unaccompanied minors and hundreds more in desperate need of food, warmth and shelter on board. Rather, he felt that it was time for Malta, which was closer to the Aquarius by just 8 nautical miles to take over. Malta refused, arguing that the boat fell under Italy’s jurisdiction, since its Coast Guard was running the rescue operation in the first place.

Even though the mayor of Sicily’s major port city of Palermo, Leoluca Orlando, said he would accept the Aquarius and her passengers, Salvini overrode the offer, launching a Mediterranean standoff. “Malta takes in nobody. France pushes people back at the border, Spain defends its frontier with weapons,” Salvini wrote on Facebook. “From today, Italy will also start to say no to human trafficking, no to the business of illegal immigration.”

As UNHCR’s Special Envoy for the Central Mediterranean, Vincent Cochetel, pleaded for sanity, calling for the issue of responsibility to be resolved after the migrants were safely offloaded, Spain finally stepped forward, offering its port of Valencia to the Aquarius. Salvini immediately tweeted “VICTORY.” But for the passengers, who have already spent the past three nights in discomfort upon the Aquarius’ steel decks, it is anything but. Valencia is at least another three days journey away, according to MSF, and bad weather is complicating matters with high winds and waves. The boat also doesn’t have enough supplies to cater for the long journey. And so now the Italian Coast Guard is stepping back in, to resupply the Aquarius, take some of the overload, and escort it out of Italian waters and over to Spain.

To a certain extent, Salvini has a point about the unfair burden on his country. Through an accident of geography, Italy has received a significant share of migrants attempting to cross the Mediterranean from Libya—nearly 640,000 since 2014, according to the International Organization for Migration. In the same period Greece received more than 1.1 million asylum-seekers making the crossing from Turkey. But unlike Greece’s migrants, who are by and large fleeing war in Syria and thus qualify more easily for refugee status, Italy’s migrants mostly come from Africa, where, a few exceptions aside, they are not eligible for the same protections.

Italy feels it has largely been left on its own to deal with the migrant flow—a task it has mismanaged spectacularly. And over the past several years, popular sentiment has been growing against the illegal—and highly visible—migrants. Salvini’s anti-immigration League party came first in Italy’s March elections, largely based on his pledge to do something about the migrant issue. Now, the time has come for him to show he is taking a stance.

Just as E.U. members Hungary and Austria have shut their borders to migrants crossing over from Italy, Salvini holds that Italy should be able to do the same—by closing its sea borders to migrants coming across from Libya via rescue boats. He has gone so far as to accuse groups like MSF and SOS Méditerranée of colluding with the people smugglers on Libyan shores who put the migrants on the flimsy dinghies in the first place.

Salvini’s attempt to blame the humanitarian rescue organizations for encouraging migration has become a favorite trope of the anti-migrant right. The truth is, desperate migrants will attempt any route if there is even the slightest glimmer of hope for success. After Italy’s ill-conceived 2017 deal with the Libyan coast guard, as well as the Libyan militias that reportedly moonlit as people smugglers to stop the departures, migration from Libyan ports did decline. But at what cost? These days, African migrants crossing the central Mediterranean route aren’t as desperate to reach Europe as they are to get out of Libya, where rape, torture-for-ransom, forced labor and even slave auctions are rife. Stopping the migrants at the Libyan coast isn’t a solution as much as it is a way of hiding the problem from the European conscience.

Which is why Spain’s offer, though deeply political in its own way, comes at a key time. By taking in migrants that had been refused by both Italy and Malta, Spain is trying to make a point in advance of a E.U. summit scheduled later this month to address the bloc’s migration policies. “Spain has made a gesture that aims to trigger a European dynamic to stop looking away, allowing one [E.U. member] to cope with the problem while the rest of us pass the buck,” Josep Borrell, Spain’s new Foreign Minister told a local radio station after he made the offer. He might want to start taking a closer look at home—Spain has largely failed to take in its share of Syrian asylum seekers from Greece despite agreeing to a Europe-wide relocation program in 2015.

France, too, is trying to score political points with its stance on the Aquarius. “If any ship was closer to France’s shores, it could obviously dock on the French coast,” French President Emmanuel Macron told his cabinet meeting on June 12, after, of course, Spain already offered to take in the migrants.

Ironically, the solution to Italy’s problem with migration lies in the very thing Italy’s new populist government most despises—a stronger European Union. A bloc that can more equally share the burden of caring for, placing, and, when necessary, deporting the migrants that have no legal justification for staying.

At the same time the E.U. and its member countries have a role to play at the point of origin. Currently, there are very few legal avenues for African migrants to come to Europe. If European nations provided more safe opportunities for migration, through temporary labor visas for example, migrants might be less willing to chance a sea crossing.

For now, though, politicians across Europe seem more likely to use the plight of the MV Aquarius to their advantage than to think of reforming their migration policies. And that means more migrants will continue to board rubber dinghies in the hopes of being picked up by a humanitarian vessel destined for Europe. 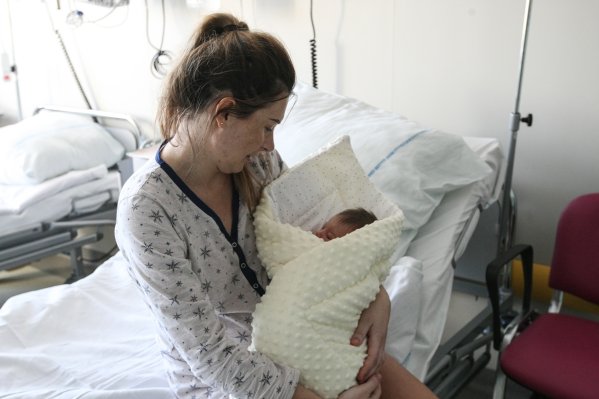 Can Better Policies Solve the West's Population Crisis?
Next Up: Editor's Pick