'Will He Shake the Hand of Peace?' Here's the Video President Trump Showed to Kim Jong Un

Just before President Donald Trump addressed the world’s media in Singapore after his meeting with North Korean leader Kim Jong Un, journalists were shown a video, first in Korean, then in English. When he walked out onto the stage, the U.S. president revealed it was a “tape” he showed the chairman prior to their meeting.

The four-minute video opens on a shot of the Earth from space, followed by shots of cities around the world, with a movie trailer-worthy voiceover telling the viewer that “only a small number will leave a lasting legacy.”

The film mixes footage of North and South Korea, using black and white imagery of border guards and barbed wire when referencing the war, and colorful footage of South Korea and other parts of the globe where “the light of prosperity has burned bright.”

As well as telling Kim “history is always evolving” the video promises that “out of darkness can come the light, and the light of hope can burn bright.” It presents the meeting as a choice for Kim—offering him the chance of international investment and resources, and asking whether he will become a “hero of his people.”

There are also several shots of the U.S. and North Korean leaders—waving from their planes, Trump at the U.N. and Kim meeting South Korean President Moon Jae-in. As it plays the Korean leaders’ meeting at the demilitarized zone, it spotlights Kim, and later over footage of Trump waving asks whether Kim will “shake the hand of peace.”

It concludes much like a movie trailer, showing off its stars, “President Donald Trump and Chairman Kim Jong Un in a meeting to remake history,” and ending on the tagline “the future remains to be written.” 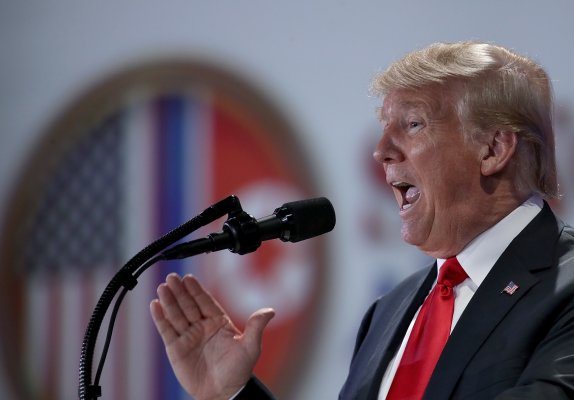 How South Korea Responded to Trump Ending 'War Games'
Next Up: Editor's Pick