According to the document, Washington would provide unspecified “security guarantees” in exchange for North Korea’s “unwavering commitment to complete denuclearization of the Korean peninsula.” In a press conference following the announcement, Trump indicated that the joint U.S.-South Korea military exercises — which Pyongyang hates as a rehearsal for invasion — would halt.

“They are very provocative,” Trump told reporters. “We will save a tremendous amount of money.”

Four bullet points laid out goals of future talks without specifying the immediate steps either side had to take. Trump said Kim had already agreed to destroy a “major” nuclear testing site. He said human-rights were discussed “very briefly.”

“The world is going to see a major change,” Kim, dressed in his trademark dark Mao suit and horn-rimmed glasses, said during the signing ceremony.

“It worked out better than anybody could have predicted,” Trump told Kim. “It was a great honor to be with you.”

Trump added that North Korea’s denuclearization process will be starting “very quickly.” Specifics, however, were sparse. North Korea has tested six nuclear bombs to date and now has missiles capable of targeting any American city. But the ending of joint military drills must be seen as a huge coup for the North Korea leader.

The document also says both leaders will strive “to build a lasting and stable peace regime” on the Korean Peninsula. Trump said he learned Kim is a “very talented man” who “loves his country very much” and agreed to invite him to the White House. Trump said he will travel to Pyongyang “at the appropriate time.” “We have developed a very special bond,” Trump said.

Trump and Kim began the first ever summit between the heads of these longtime enemies with a one-on-one meeting, with interpreters, that lasted 38 minutes, followed by an expanded bilateral meeting with advisers before a working lunch. The summit ended early in the afternoon with the participants due to travel home that same day.

Speaking to reporters between sessions, Trump said the meeting was going “very, very good. Excellent relationship.” Kim was asked three times whether he would give up his nuclear weapons but did not reply.

“Well, it was not easy to get here,” Kim said. “The past worked as fetters on our limbs, and the old prejudices and practices worked as obstacles on our way forward. But we overcame all of them, and we are here today.”

During a walk along the hotel’s breezeway, Kim’s translator said, “Many people in the world will think of this as a … form of fantasy … from a science fiction movie,” according to audio from CNN.

Kim was in relaxed mood before the summit, leaving his hotel Monday night for a walkaround the Flower Dome at Gardens by the Bay with his sister Kim Yo Jong and other top deputies, even stopping to snap a selfie. Singapore’s foreign minister Vivian Balakrishnan posted a photo of himself with Kim on Facebook. The sojourn even made the front page of Tuesday’s main newspaper in North Korea.

In an unprecedented sign of openness, the summit was transmitted in real time by North Korea’s state broadcaster KCNA. Normally North Korea’s 25 million people are normally only informed of such state events around 24 hours afterward.

There were two North Korean videographers, one cameraman, and one supervisor, all wearing a pin which bore the image of North Korean founder and Kim’s grandfather, Kim Il Sung. Reporters also noticed a female North Korean bodyguard.

The expanded bilateral meeting saw Kim joined by Workers Party vice-chairman Kim Yong Chol, and North Korean foreign ministers Ri Yong Ho and Ri Su Yong. Trump was joined by Secretary of State Mike Pompeo, Chief-of-staff John Kelly and National Security Adviser John Bolton, despite the latter being despised by Pyongyang for his recent suggestion that the regime follow the Libyan model of disarmament. In 2003, North Korea even described Bolton as “human scum and a bloodsucker.”

“He’s the national security advisor and certainly North Korea is a threat to U.S. national security, so I think it’s appropriate he’s there,” Bruce Klingner, former CIA station chief for Korea and now an analyst with The Heritage Foundation, tells TIME. “If North Korea doesn’t like that, well, [you can argue] we should exclude Kim from the room since the U.N. Commission of Inquiry ruled that he’s a purveyor of crimes against humanity.”

In a bizarre movement, after the working lunch Trump appeared to take Kim to check out his presidential Cadillac, in what observers suggested was an attempt to bond with the millennial despot.

It remains to be seen how the agreement will be implemented. Pompeo has promised North Korea an unprecedented and “unique” security guarantee if North Korea commits to denuclearize. But Christopher Green, a senior Korea analyst for the International Crisis Group, doubts that would be enough to make the regime give up its nukes.

“If North Korea can get some astronomical and unforeseen benefit, the leadership might be able to sell that to the elite and the people,” he tells TIME. “I don’t see that kind of offer on the table but North Korea will be aware that is one potential outcome.”

U.S. officials said many more meetings would take place between the sides. But despite Tuesday’s historic signing, Klingner highlights the regime’s brazen history of noncompliance.

“Well, first [North Korea] signed four international agreements promising never to build nuclear weapons, and then four subsequent ones promising to give up what they promised never to build in the first place.

“In January and April, Kim gave speeches [that said] we will continue to ramp up production our nuclear weapons,” adds Klingner. “That doesn’t exactly sound like they’re ready to give them up.” 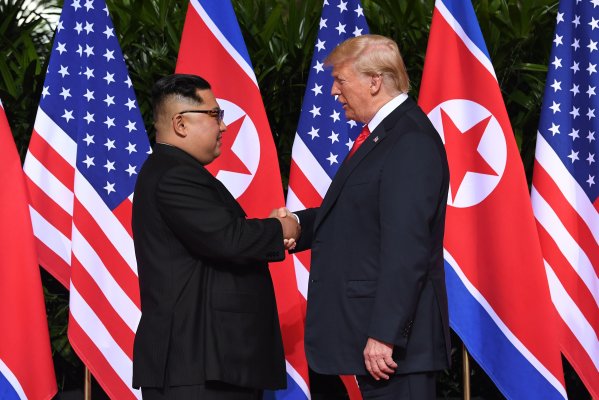 The Moment Trump and Kim Shook Hands
Next Up: Editor's Pick