President Donald Trump shook hands with North Korean leader Kim Jong Un at 9:05 a.m. local time at the Capella Hotel resort on Singapore’s Sentosa Island Tuesday, marking the start of a historic summit that brought sitting leaders of the two countries together for the first time.

Trump is expected to sit face-to-face with Kim for one hour accompanied only by translators, later to be joined by senior aides to both leaders as they discuss the potential for peace and denuclearization on the Korean peninsula.

“We will have a terrific relationship, I have no doubt,” Trump told reporters just before their private audience.

“Overcoming all the obstacles, we have managed to arrive here today,” Kim said through an interpreter.

Trump initially announced plans to carry out discussions over several days, but the White House said Monday that he plans to depart after one day of talks, according to the Associated Press.

The world will be watching their highly anticipated summit, which follows a year of escalating rhetoric from both sides and provocative ballistic missile and nuclear tests by North Korea that have rattled the U.S. and its regional allies. 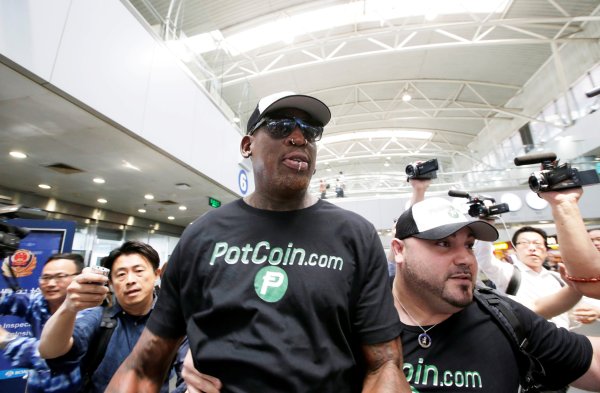 Dennis Rodman Came to the Trump-Kim Summit for More 'Basketball Diplomacy'
Next Up: Editor's Pick