The federal agency tasked with investigating sexual harassment in the workplace has seen its web traffic triple since the #MeToo movement began last fall, according to an official, but the number of complaints it’s received has remained steady.

Victoria Lipnic, the acting chair of the Equal Employment Opportunity Commission, which is tasked with enforcing civil rights laws affecting the workplace, said Monday that it may be too soon to judge whether more victims will come forward, since complainants have around 300 days to file a report.

“While our workload has increased on this issue for all of our offices,” including boosts in requests for workplace trainings, she said, “we have not seen a big increase in charges filed.”

Speaking after a meeting of the the EEOC’s Select Task Force on the Study of Harassment in the Workplace, Lipnic said that better statistics will be available at the end of the fiscal year.

Lipnic and her fellow EEOC commissioner Chai R. Feldman also said that, anecdotally, they have heard that there have been upticks in reporting in human resources departments and through internal systems at workplaces across the country. In many cases, they said, it could be that the issues are being resolved before complaints are filed at the EEOC.

Either way, the #MeToo movement has had a resounding impact on American workplaces, which is why on Monday the EEOC huddled in Washington to discuss additional steps employers and policymakers should take to reverse current trends of workplace harassment. The federal agency reconvened a federal task force that had been formed to study harassment in the workplace under the previous administration.

In a Washington conference room, stakeholders and officials gathered to discuss what Lipnic described as the “second and third generation” issues of harassment, including the legal sticking points that have come to the forefront and concrete, effective solutions to stopping harassment before it starts. The #MeToo Movement, Feldblum said, provided a unique opportunity “to leverage this moment to create significant and sustainable change.”

Following months of work by the task force, in June 2016, the EEOC issued a lengthy report on the prevalence of workplace harassment, including harassment due to a person’s sex or race, how employers respond to it, and the effectiveness of existing prevention methods. That report recommended more research and data on workplace harassment, specific changes to harassment reporting procedures and an overhaul of anti-bias training programs.

At the time, they’d hoped that the report would be ahead of the curve and useful, but some 400 days after it was released it ended up being far more crucial than they could have predicted.

In October 2016, that the nation was rattled by allegations that Hollywood mogul Harvey Weinstein had assaulted and abused a bevy of women, as reported by the New York Times and the New Yorker. The exposure of Weinstein sparked an international movement of women coming forward with their personal stories. Many used the hashtag #MeToo to share their stories; borrowing from an existing campaign to call attention to the pervasiveness of sexual assault and harassment.

After the 2016 report, the agency launched a new training program that has sessions on bystander intervention and changing workplace culture. Lipnic said Monday that they have held around 200 sessions and trained about 5,000 people since the launch.

An issue that has arisen in the wake of #MeToo that the report did not address, though, was the legal challenges that come with harassment cases. On Monday, the task force zeroed in on the legal mechanisms that are often used in these instances, including non-disclosure agreements and forced arbitration.

Reports on harassment in the current moment have often shown how such agreements have kept some victims from coming forward. Those advocating for an overhaul of the approach to harassment have complained that the mechanisms shroud harassment cases in secrecy and protect employers while hurting victims. According to Suzanne Hultin of the National Conference of State Legislatures, at least 20 states introduced legislation on workplace sexual harassment in 2018 and 16 of those states would limit or ban the use of non-disclosure agreements and/or forced arbitration under their proposals.

Attorneys on both sides of the debate — managers and employees — offered testimony on the legal challenges, but the Commission is not planning to take a position on the use of non-disclosure agreements or forced arbitration anytime soon. In a conversation with reporters after the discussion, the commissioners said they convened the task force to consider those questions so they could be better informed in conversations with policymakers. “We wanted their wisdom about what the position should be,” Commissioner Feldman said.

The task force also hosted several women who have already begun taking steps to address the issue of harassment in employment fields including the restaurant industry, hospitality, tech, and the media.

Some of the strategies discussed were a Chicago-based effort to empower hotel workers who experience harassment, by equipping them with panic buttons for their shifts and given them cushion to report incidents. Another was a California restaurant owner’s strategy to encourage workers to report harassment from customers through a color-coded alert system. Many of the projects had been underway before #Metoo happened. Now, their work could be used to inform efforts across the country. 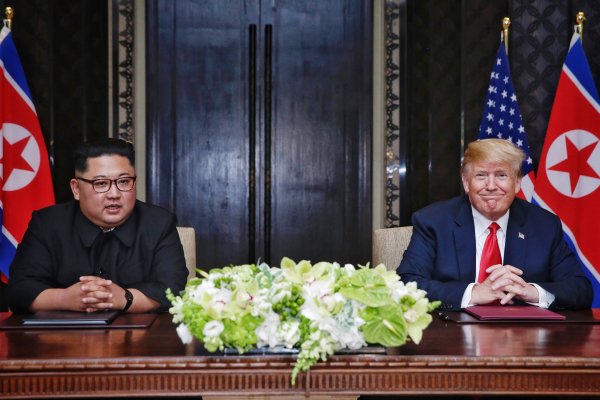 Lawmakers Are Hesitant to Judge the North Korea Summit Yet
Next Up: Editor's Pick