Attorney General Jeff Sessions said Monday that victims of domestic violence would no longer be eligible for asylum in the United States. Victims of gang violence also will not qualify for asylum.

“The mere fact that a country may have problems effectively policing certain crimes—such as domestic violence or gang violence—or that certain populations are more likely to be victims of crime, cannot itself establish an asylum claim,” the opinion reads.

The Attorney General issued a highly anticipated opinion on the matter of who is eligible for asylum in the U.S. on Monday, marking yet another step the Trump Administration has taken to curtail immigration to the U.S.

“Our nation’s immigration laws provide for asylum to be granted to individuals who have been persecuted, or who have a well-founded fear of persecution, on account of their membership in a ‘particular social group,’ but most victims of personal crimes do not fit this definition — no matter how vile and reprehensible the crime perpetrated against them,” a Justice Department spokesperson said. “The Department of Justice remains committed to reducing violence against women and enforcing laws against domestic violence, both in the United States and around the world.”

Immigration advocates voiced concerns that the Attorney General would be reconsidering the Administration’s approach to asylum when it was first revealed that he had reopened an immigration court decision on the matter earlier this spring.

However, the facts of the case were largely unknown until news outlets and immigrant rights’ groups learned that the case involved a woman who had been granted asylum after escaping rape and abuse at the hands of her ex-husband in El Salvador.

In an opinion issued Monday, the Attorney General said that although he recognizes that victims of domestic violence “may seek to flee from their home countries to extricate themselves from a dire situation” the asylum statute does not apply to general hardship.

“An alien may suffer threats and violence in a foreign country for any number of reasons relating to her social, economic, family, or other personal circumstances,” Sessions’ opinion reads. “Yet the asylum statute does not provide redress for all misfortune.”

Sessions’ opinion could have an immediate impact on asylum seekers at the U.S. border, many of whom are fleeing gender-based violence in their home countries ranging from domestic violence to human trafficking and female genital mutilation.

The Tahirih Justice Center, which advocates for and serves immigrant women and girls who have survived gender-based violence, anticipated that the decision could come on Monday afternoon. In an email, the group said it has clients who may lose asylum cases as a result of the decision, but said they are prepared to fight it.

The American Immigration Council’s Executive Director Beth Werlin called the Attorney General’s move “yet another attempt to close our doors” to those who are fleeing oppression.

“The Attorney General’s decision—if permitted to stand—will no doubt result in sending countless mothers and children back to their abusers and criminal gangs,” Werlin’s statement reads. “Turning our backs on victims of violence and deporting them to grave danger should not be the legacy sought by any administration.” 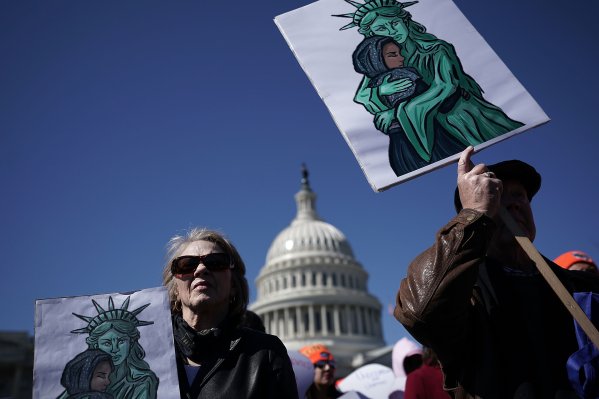 Republicans Avoided a Revolt on Immigration. But the Fighting Isn’t Over
Next Up: Editor's Pick