There’s no better time than summer to catch up on the books you might have missed this winter and spring. From a feminist retelling of classic mythology to a troubled love story set partly in a prison, here are our favorite novels of 2018 so far.

The Mars Room by Rachel Kushner

Rachel Kushner’s characters are so authentic and vividly drawn that with each new novel, it’s easy to assume she’s tapped out. Yet in The Mars Room, she brings to life another remarkable heroine. Romy Hall is a San Francisco wild-child who grows up in the gritty Sunset district before falling into life as a dancer and eventually finding herself in prison, where much of the action is set. Although the story is achingly sad, the correctional facility is filled with an eccentric, often extremely funny — and dangerous — cast. The novel raises essential questions about the nature and causes of violence, and how it’s manifested in “stark acts” and “abstract forms.” — Eben Shapiro

Time is running out in Red Clocks. Like many other popular works of speculative fiction, Leni Zumas’ novel imagines a world in which women are rapidly losing their rights; abortion, in-vitro fertilization and adoption by single women are already illegal. Four women with intertwined lives all attempting to deal motherhood and their uncertain futures may feel like a literary cliche. But Zumas’ urgent story adds texture and depth to the idea that the personal is always political. — Kelly Conniff

The Sparsholt Affair by Alan Hollinghurst

Beginning at Oxford during World War II and traversing toward present day, The Sparsholt Affair takes an itinerant journey through the lived experiences of gay men facing ever-shifting cultural mores. Hollinghurst’s narrative orbits around the disparate fates of a father and son, but contained within its epic scope is an elegiac portrait of the inexorable power of time. Hollinghurst renders pastoral vignettes, fine art and stolen glances all with the same delicate precision in a book filled with sentences begging to be underlined. — Wilder Davies

Asymmetry is told in two distinct narratives: “Folly,” in which a young editor becomes romantically involved with an older, established writer at the start of the Iraq War, and “Madness,” in which an Iraqi-American man is held by immigration officers at Heathrow airport. Halliday’s writer character in “Folly” sent a gossipy thrill through the literary world — the man resembles, in many pointed ways, the recently passed Philip Roth, with whom Halliday had a romantic relationship. But the real pleasure of the novel is stitching together the connection between the two stories. — Lucy Feldman

The House of Broken Angels by Luis Alberto Urrea

‘Big Angel’ de la Cruz attends his mother’s funeral on a Saturday and throws his own final birthday party on Sunday. In The House of Broken Angels, Luis Alberto Urrea affectionately reveals the intricacies of one expansive Mexican-American family in Southern California as it faces the loss of two members. Urrea’s bright and complex characters demonstrate unique ways of maintaining their family’s Mexican roots and embody what it means to be American. — Julia Zorthian

The bestselling author of The Song of Achilles turns her attention to Circe, the legendary sorceress who turns men into beasts in Homer’s Odyssey, in a feminist retelling. Banished for all eternity to the remote island of Aiaia, the daughter of the titan sun god Helios and sea nymph Perse crosses paths with a slew of Greek mythological icons as she lives out her life in exile. But it’s when Circe is finally forced to reckon with her own immortality that Miller’s fresh take on this ancient tale truly shines. — Megan McCluskey

An American Marriage by Tayari Jones

When a young black man named Roy is wrongfully imprisoned, he and his new wife Celestial struggle to sustain their marriage. There’s a certain horrifying inevitability to this middle class, upwardly mobile man’s arrest: The details of trial are summed up in a few short paragraphs. Ultimately, An American Marriage is not a legal drama, but a personal one. The crux of the narrative unfolds in letters sent back and forth between the couple while Roy is in prison. A gulf grows between them in these missives: Roy hopes that like Odysseus, he will return from a difficult journey to a dutiful wife, but Celestial is a modern woman who doesn’t have the time to wait. Through their relationship, author Tayari Jones demonstrates the personal ramifications of a broken social system. — Eliana Dockterman

The Perfect Nanny by Leila Slimani

Myriam hires Louise to look after her children, only to come home one day and discover the nanny has killed them. It’s a story ripped from the headlines — bearing striking resemblance to a 2012 New York City murder case — as well as from the most brutal nightmares of every parent. Leila Sliming’s sparse prose and slow-burning storytelling roils with female rage. — Lucy Feldman 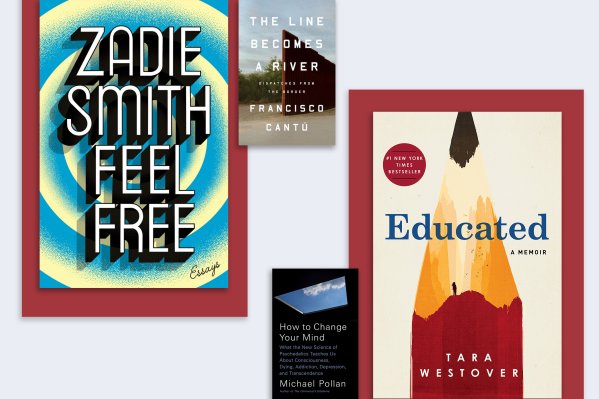 The Best Nonfiction Books of 2018 So Far
Next Up: Editor's Pick