As President Trump prepares to sit down with North Korea’s dictator Kim Jong Un on a heavily secured five-star resort island in Singapore on Tuesday, he’ll be testing the limits of an improvisational approach to diplomacy that his aides believe has unlocked years of stalled diplomacy with the nuclear-armed pariah.

For those who have known the President for years, his handling of the North Korea summit has been trademark Trump: focused on immediate personal and tactical advantage often in the face of established, strategic wisdom.

“You have someone coming from an entirely different discipline in industry and trying to look at long-standing sclerotic problems that nobody’s been able to dig out of,” Kellyanne Conway, a close aide to Trump, told TIME.

During the campaign, Trump scandalized conservative foreign policy circles by saying he would have “no problem” speaking directly to Kim. He remained open to talks with Kim, even after Barack Obama warned him in a closed-door meeting two days winning the election that North Korea would be his top foreign policy challenge.

But then, over the summer, Trump goaded North Korea by threatening “fire and fury” if Kim continued nuclear and missile tests and arresting Americans living in North Korea, and other provocative actions. Against the advice of his aides, prodded Kim personally, calling him “rocket man,” in a speech before the United National General Assembly in September and adding “little” to the epithet in Tweets.

Now in Singapore, Trump has said he would walk away from the meeting if he senses Kim isn’t serious about giving up his nuclear weapons. “I think within the first minute I’ll know,” Trump said as he left Canada for Singapore on Saturday. “I feel that Kim Jong Un wants to do something great for his people and he has that opportunity and he won’t have that opportunity again.”

It’s that same instinct that led Trump to unexpectedly agree to meet Kim in the first place.

On March 8, 2018, a South Korean envoy rushed to Washington with a message so urgent and sensitive it needed to be delivered in person: North Korea’s young dictator, Kim Jong Un, wanted to meet President Trump as soon as possible. The door to the Oval Office clicked shut. President Donald Trump turned to the handful of senior advisors gathered in front of him and jutted out his chin in what aides have come to recognize as a sign that he’s about to say something provocative. “I’m inclined to do it,” Trump said. “What do you think?”

There were a million reasons to say no, and as the South Korean envoy cooled his heels across the hall in the large, windowless Roosevelt Room, Trump’s aides took turns listing them, according to two U.S. officials briefed on the meeting. For years, the U.S. had refused to reward North Korea’s treaty-violating pursuit of nuclear weapons and intercontinental ballistic missiles; a face-to-face meeting would seem to do just that. Moreover, with little time to plan tactics and strategy, or demand concessions, there was no way to tell what Kim might give up in return. Worst of all, if talks proved that there could be no diplomatic solution to the standoff, then military conflict—even nuclear war—would become more likely.

But in a matter of minutes, Trump had made up his mind. By quickly saying yes to a meeting, the President thought, he would test Kim’s intentions and put him off-balance, explained a close aid. And that was that. With the decision made, Trump invited the South Korean diplomat, national security advisor Chung Eui-Yong, and the rest of the delegation from Seoul into to the Oval Office. Seating Chung in the armchair next to him in front of the fireplace, Trump beamed. “Let’s do it, fellas,” the President said.

Trump wasn’t done surprising his staff or his South Korean guests that day. He had, in some ways, internalized the concerns of his aides. Chung had assured Trump that Kim was open to giving up his nukes, wouldn’t object to U.S.-Korean military exercises, and promised to stop nuclear and missile tests.

But none of that was in writing. Trump wanted to protect himself. So as he sat with Chung, Trump made a surprise tactical move. “Here’s an idea: How about you make the announcement,” Trump said, according to the officials.

For Chung, it was a disorienting moment jet-lagged from the 14-hour flight, he had expected to meet only with NSC staff on his first day in D.C. It would go against decades of diplomatic protocol for an ally to speak on behalf of the American President. But Trump had seen on television that Chung and his team were meeting next door in the Eisenhower Executive Office Building and had insisted Chung be brought to him immediately. “Why the hell are they not coming to see me?” Trump asked.

As White House aides helped draft a statement for Chung to read, Chung stepped out of the Oval to call his boss, South Korean President Moon Jae-in, 7,000 miles away in Seoul to get approval. Just after 7 p.m. that night — two hours after delivering the message from Kim — Chung walked in front of cameras and microphones in the West Wing driveway and announced Trump had agreed to meet Kim.

Moving at whip-crack speed, Trump had unexpectedly opened a path to diplomacy with North Korea that stunned foreign policy experts. His CIA director and soon-to-be Secretary of State Mike Pompeo made two secret trips to Pyongyang and successfully brought back with three freed American hostages. Asked on May 9, if he deserved the Nobel Peace Prize, Trump replied: “Everyone thinks so, but I would never say it.”

But the reverie was short-lived. Late one Wednesday night at the end of May, Trump’s national security team huddled with him in the White House to tell him a North Korean official had called Vice President Mike Pence a “political dummy” and threatened a nuclear “showdown.” On top of that, the delegation he’d sent to Singapore to hammer out the summit details had been stood up and there had been radio silence from North Korea for more than a week.

It was starting to look like a summit would be a diplomatic and public relations disaster for Trump. Observers suggested that Kim had played the inexperienced real estate magnate. Kim had sprinted to gain road mobile medium range missiles and what appeared to be a fusion bomb in the summer of 2017. And it turned out he was capable of deft diplomacy as well. After directly threatening the U.S. and Trump himself, Kim had deftly pivoted to extend his hand to South Korea in an offer of peace.

After receiving the news, Trump decided to sleep on it. He had just returned to the White House late on a Wednesday night May 23 after raising $5 million for his re-election fund in New York City and railing against the dangers of MS-13 gang members on Long Island. He’d been up early that day tweeting out allegations that the FBI spied on his campaign.

The next morning, after firing off two Tweets alleging the FBI sent a spy to infiltrate his presidential campaign, Trump personally dictated a partly wistful, partly threatening letter to Kim cancelling the summit, calling Kim “His Excellency,” pointedly hoping not to have to use America’s “so massive and powerful” nuclear capabilities.

Trump’s letter appears to have worked. Just over a week later, North Korea’s No. 2 official Kim Yong Chol walked into the Oval Office and personally presented Trump with a much bigger letter and the summit was back on.

“For Trump in particular, the danger is that he is approaching this almost as a reality show. Different seasons, it’s on, it’s off,” said Jeff Prescott, a former senior National Security Council official under President Obama. “He’s thinking about the short term benefit he could get from the pageantry of the summit itself and could lose sight of the substance of the threat.”

Kim wants to be seen on equal footing with the U.S. and, ultimately, secure a guarantee that the U.S. won’t attack and will eventually leave the Korean Peninsula.

Many experts watching the talks take shape worry that Trump may be so eager to reach a deal with Kim that he gets outplayed in the negotiating room. Trump’s experience in negotiating real estate deals may not transfer well to negotiating with rogue leaders like Kim, said Philip Gordon, a fellow at the Council on Foreign Relations and a senior White House official on the Middle East under President Obama.

In a real estate deal, if a negotiator is unpredictable, takes an unrealistic opening position and threatens to walk away “the worst thing that can happen, is that you don’t buy the building,” Gordon said. “‘Oops, I didn’t buy that building,’ is not the same as ‘oops’ now that country has a nuclear weapon.” 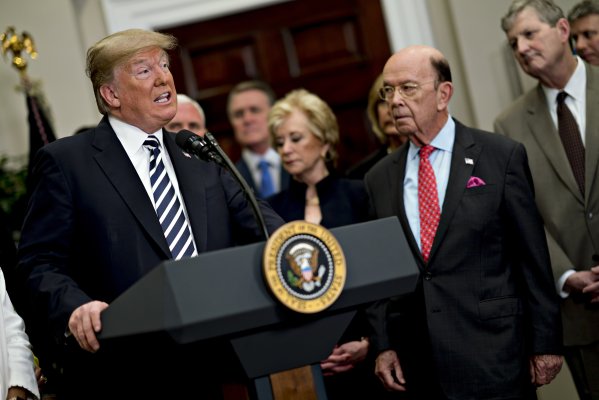 The U.S. Trade War with China Has Reached a Dangerous New Phase
Next Up: Editor's Pick