'He Had Everything.' Anthony Bourdain's Mother Says She Never Thought He Would Die by Suicide

Anthony Bourdain’s mother has expressed shock and sadness over the death of her son in an interview with the New York Times.

“He is absolutely the last person in the world I would have ever dreamed would do something like this,” Gladys Bourdain, who was an editor at the Times for years, told the newspaper.

Bourdain, the renowned chef and author whose storytelling and traveling influenced others and embraced different cultures, died this week in an apparent suicide. He was 61 years old.

Gladys Bourdain told the Times that Eric Ripert, a French chef and close friend of her son’s, told her that Bourdain “had been in a dark mood these past couple of days.”

Bourdain’s death shocked and saddened the world this week as fans and friends of his expressed the impact he had on their lives and the influential role he had in the restaurant industry. Restaurant owners and chefs who he visited in his variety of TV shows point to him as a reason for their growing success, and fans took to social media to express how he used his platform to convey empathy and understanding.

Bourdain’s suicide followed that of Kate Spade, an influential fashion designer who had died in an apparent suicide at age 55, and came at a time when the rates of suicide were on the rise across the U.S. Mental health professionals advised people to reach out and support friends or loved ones who may be struggling, and learn to identify warning signs like depression or changes in behavior, among other behaviors.

The deaths of two influential figures in their respective fields have also provoked conversations about how successful people are not immune depression, mental health issues or suicide. TIME’s Belinda Luscombe detailed this in a piece, where she examined the deaths of Bourdain and Kate Spade, the influential fashion designer who had died by an apparent suicide days earlier. “Many lives are not as they appear. Happiness is not the end result of a sum of accomplishments,” Luscombe writes. “The person whose wealth/wardrobe/job/talent you wish you had has his or her own struggles, and they could at least equal our own.” 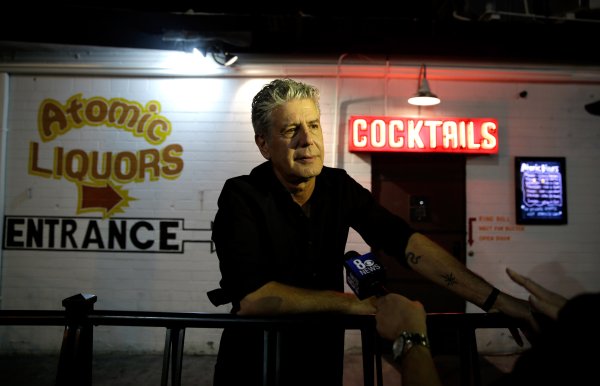 Bourdain Brought Golden Touch to Restaurants He Visited
Next Up: Editor's Pick