About a year after Anthony Bourdain visited Belle Isle Seafood, the Boston restaurant moved from a 883 square-foot location to a 5,000-square-foot one.

Business was booming — and Bourdain had something to do with it, owner and chef Jim Costin told TIME on Saturday following the suicide of the legendary chef, author and traveler extraordinaire. After Bourdain’s 2011 No Reservations episode featuring Belle Isle Seafood and its delightful lobster rolls aired, patrons from all over the world started visiting the restaurant.

“It was ridiculous,” Costin, the restaurant’s owner, said. “People were making it one of their destinations.” Even re-runs of the episode bring a new slew of customers to the restaurant as Bourdain’s stamp of approval leaves a lasting mark.

Costin is just one of several of restaurant owners and chefs who point to Bourdain as an important key to their growing success. The iconic chef’s globetrotting trips to restaurants — whether done through the Food Network’s A Cook’s Tour, the Travel Channel’s No Reservations, or CNN’s Parts Unknown — brought hole-in-the-wall joints and local restaurants into the international spotlight, drawing patrons from all over the world.

A woman reads notes at a makeshift memorial of Anthony Bourdain at the closed location of Brasserie Les Halles in New York, where Anthony Bourdain who was found dead in his hotel room in Paris used to work as the executive chef in New York
Anadolu Agency—Getty Images

That kind of influence, Costin said, must have something to do with Bourdain’s regular-guy persona.

“A lot of times you see celebrity chefs come into restaurants and they act like they’re curing cancer, but they’re really just cooking food,” Costin said. “For Bourdain, it was almost like he was just in his mom’s kitchen, hanging out and cooking food.”

Jose Coto, the owner of 188 Bakery Cuchifritos in the New York City borough of the Bronx that Bourdain featured on a 2014 episode of Parts Unknown, shared a similar story. He had new customers from all over the world visiting hole-in-the-wall Puerto Rican restaurant after the episode aired, and expressed gratitude for Bourdain’s impact.

“We’re always going to remember him as a great person,” Coto said. “We feel very deeply for him.”

Other chefs featured on Bourdain’s television shows shared memories of his visits through social media — and honored to continue his legacy. Jason Wang, the owner of Xi’an Famous Foods restaurant chain, said in an Instagram post that Bourdain’s 2007 visit to the chain’s first location in Flushing, Queens, “helped bring our family out from living in one room in Flushing to living the American dream.”

Since Bourdain’s visit over a decade ago, the restaurant expanded to multiple locations throughout New York City. “We were able to grow our business and provide great food for our guests, and opportunities for our employees,” Wang said. On the day of Bourdain’s death, Wang said the restaurant chain donated all of its net sales to the National Suicide Prevention Lifeline.

Donkey’s Place, a New Jersey bar known for its Philly cheesesteaks, still sees customers coming in thanks to Bourdain three years after its 2015 Parts Unknown episode aired. Only Bourdain could declare that the best cheesesteak in the world is actually in Camden, New Jersey – and make people flock there in droves to try it.

“We can’t thank you enough for your visit with us,” the bar said in a Facebook post with an image of Bourdain dining there. “It is talked about almost daily.”

Described as a restaurant with “all the marks of quality” in a No Reservations episode that explored Los Angeles’ Mexican cuisine, Tacos Villa Corona thanked Bourdain “for everything you’ve done for our family.”

For many, Bourdain’s influence expanded outside of just the restaurant industry. Through his storytelling, he featured a diverse array of cuisines and cultures and highlighted family-run restaurants. Indeed, Parts Unknown won five Emmy Awards and a Peabody Award in 2013. “He’s irreverent, honest, curious, never condescending, never obsequious,” as the Peabody Awards described Bourdain back then. “People open up to him and, in doing so, often reveal more about their hometowns or homelands than a traditional reporter could hope to document.”

Bourdain himself started out his career by washing dishes — just like Costin, the Belle Isle Seafood owner Bourdain went on to feature on his show. That was part of what made him so influential: his humble beginnings, his wide-eyed curiosity and his modest nature, Costin said.

“You want to sit down and have a beer with him. And I guess most people did,” Costin said. “He told a great story, that’s for sure.” 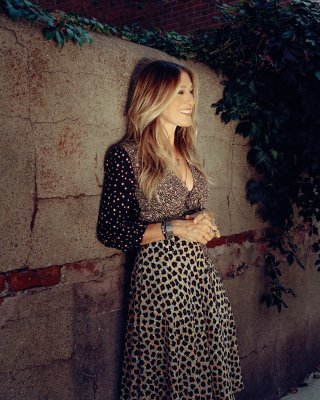 Sarah Jessica Parker Is the Latest Celebrity to Start Her Own Book Imprint
Next Up: Editor's Pick