President Donald Trump said Saturday that he will be able to tell within one minute if North Korean Leader Kim Jong Un is serious about making a deal with him during their upcoming summit in Singapore.

“It’s just my touch, my feel – thats what I do,” Trump declared at a wide-ranging press conference before leaving the G-7 summit in Quebec, Canada. “They say you know you’re going to like somebody in the first five seconds – you ever hear of that one? Well, I think I’ll know very quickly whether or not something good is going to happen. I also think I’ll know whether it will happen fast.”

The comments come just three days before Trump and Kim are scheduled to meet at the Capella Hotel on Singapore’s Sentosa Island – the first time a sitting U.S. President has ever met with the North Korean leader.

“I’ll be on a mission of peace,” Trump said of the summit. “In my heart, we will be carrying the hearts of millions of people, people from all over the world. We have to get denuclearization, we have to get something going.”

But Trump’s upcoming summit with Kim Jong Un was only one of the topics he addressed in this wide-ranging press conference. He weighed in on everything from tariffs, his predecessor’s policy towards Russian President Vladimir Putin, his desire to see Russia re-join the G-7, and his relationship with the other foreign leaders at the summit.

The focal point of Trump’s brief appearance at the G7 summit – he left for Singapore on Saturday, before the group discussed climate change – was his current tensions with his counterparts over trade. It was less than two weeks ago that he declared Canada, Mexico and the E.U. were not exempt from tariffs on steel and aluminum. The days before the summit were filled with tweets about what Trump sees as unfair trade policies of U.S. allies and how they were detrimental to the United States. At one point Trump even referred to Canadian Prime Minister Justin Trudeau as “indignant,” and also chided French President Emmanuel Macron, causing Macron to respond with a tweet of his own.

Trump continued this rhetoric Saturday, arguing that trade was at the top of the discussion list at the summit because the United States had been repeatedly taken advantage of “for decades and decades,” and argued that retaliatory tariffs – which these countries have threatened – would be a mistake. He also floated the idea of a “tariff-free” trade zone among the countries.

“We’re the piggy bank that everybody is robbing. And that ends,” Trump declared.

But, Trump insisted he was still optimistic about relations with the G7 allies, calling his relationships with Trudeau, and German Chancellor Angela Merkel a “ten.” But in yet another divergence from these allies, he reiterated his statement from Friday, that Russia, which was removed from the group following its annexation of Crimea in 2014, should be allowed back in.

Trump only alluded to the annexation as “something” that had happened. When pressed by a reporter, who noted the annexation was the impetus for Russia’s removal and asked if Crimea should be recognized as part of Russia, Trump defaulted to blaming his predecessor. “You’d have to ask President Obama, because he was the one that let Crimea get away, that was during his administration,” he said. “I may have had a much different attitude.” (Obama imposed sanctions on Russia following the annexation).

And, as is Trump’s wont, he concluded by berating the media, even deriding a CNN reporter who asked him a question for being from a “fake news” outlet – a term he took credit for coining. 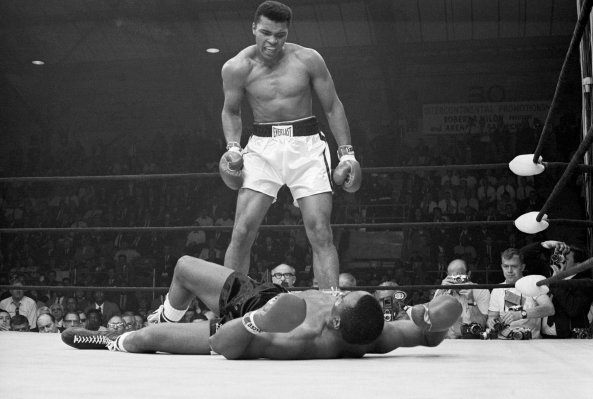 Trump Says He Might Pardon Boxing Legend Muhammad Ali
Next Up: Editor's Pick