The Trump-Macron Friendship Is Falling Apart at the G-7. That Spells Trouble for the French President

The world’s most powerful friendship might finally be on the rocks.

Enraged by President Donald Trump’s decision not to exempt America’s close allies in the E.U., Canada and Japan from his steel and aluminum tariffs, French President Emmanuel Macron has broken his year-long warm embrace of his U.S. counterpart—and threatened to isolate the world’s biggest economy by forming a united bloc against Trump with other allies.

In a Trump-like tweet-storm overnight on Thursday, Macron lashed out at Trump from Quebec, where the world’s seven more powerful leaders are meeting at the G-7 summit. “Maybe the U.S. President doesn’t mind being isolated, but we also don’t mind signing a six-country agreement if need be,” Macron tweeted in a rare and sharp warning to Trump.

Read more: U.S. Allies are ready to turn their backs on Trump at the G-7 summit

Those words could spell the downfall of one of the most curious political odd couples in recent times—a friendship in which Trump has called Macron “fantastic,” and Macron has addressed Trump as “dear Donald.”

In many ways, Macron and Trump were polar opposites in style and policy, pitting a young global-minded intellectual against an aging nationalist.

Even so, ever since Macron shot to power in May last year as France’s youthful, come-from-nowhere president, he made it clear that he intended to be Donald Trump’s friend—a decision he said was based on a centuries-old alliance between the U.S. and France. The two exchanged mobile numbers shortly after Macron’s election, and have spoken frequently since.

Macron’s warmth has been a marked contrast to German Chancellor Angela Merkel, who has barely concealed her distaste for Trump’s views, and to British Prime Minister Theresa May, whose relationship with Trump has been strained.

That quickly made Macron—a first-time elected politician—the preeminent global figure among the E.U.’s 28 leaders. “I’m not here to judge or say I’m the opponent to anybody,” Macron told TIME in an interview last November at the Elysée Palace. “I do believe we have a very good personal relationship.”

In turn, Trump was receptive to Macron’s advances. In July last year, he gushed in Paris after Macron hosted him at the Bastille Day military parade and at a fine dinner with their wives atop the Eiffel Tower. In late April Trump hosted Macron at the first White House state dinner of his presidency.

“There was a kind of reciprocal fascination between the two men because they had both won in the most unexpected manner,” Dominique Moisi, senior advisor to the French Institute of International Relations in Paris, or IFRI, tells TIME. “Macron was very sure of himself, and his charm, believing that if he could seduce his teacher at 16 [Brigitte Macron, now the French president’s wife] and seduce France at less than 40, he could do the same with Trump.”

But as the relationship takes a bumpy turn, Macron potentially has much to lose. Some see his assuredness that he could persuade Trump to reverse course as a miscalculation—leaving Macron open to criticism that he has been far too acquiescent until now to Trump, who is deeply disliked in Europe.

“You wonder why Macron went to all that effort, dining with the Trumps at the Eiffel Tower, the whole masquerade in Washington, all that hugging and holding hands,” says Laurence Nardon, head of IFRI’s program on U.S. relations. “It looks ridiculous.”

One moment during Macron’s Washington visit in late April hinted at the trouble to come. In what seemed to be a power play, Trump, in full view of cameras, appeared to flick dandruff off the French leader’s jacket, telling him he was trying to “make him perfect.” “It was a cringing moment,” Nardon says.

In fact, Macron’s anger over Trump’s tariffs marks just the latest rift between the two leaders.

The relationship officially turned sour in early May, when Trump announced he was pulling the U.S. out of the Iran nuclear deal, which was signed in 2015 with the E.U., U.N. and Iran. Trump gave no forewarning of his decision to Macron, despite their Oval Office meeting in late April, during which the French leader pleaded with Trump to stick to the Iran deal.

The schisms began well before then, however, dating to Trump’s decision in June 2017 to withdraw from the Paris Agreement on climate change, which was signed in 2015 in the French capital; the U.S. is now the only country in the world not to commit itself to the deal, which aims to drastically reduce carbon emissions in order to rein in global warming. Macron slammed the decision, telling Trump in a speech that “there is no Plan B.”

And on Tuesday, Macron told Israeli Prime Minister Benjamin Netanyahu that Trump’s decision to move the U.S. Embassy from Tel Aviv to Jerusalem increased violence. “If this leads to people dying it is not a celebration,” he said.

“There has been an accumulation of differences,” one senior aide at the French Foreign Ministry, speaking anonyously, told TIME last month after Trump’s withdrawal from the Iran nuclear deal.

Moisi calls the current chill between Washington and Europe “the worst trans-Atlantic crisis ever,” leaving Europeans wondering who they can turn to if a far deeper crisis—say, a war—occurs. “If American is no longer the life insurance of Europe, well, where are we going to turn?” he says. “I have no idea.”

For that very reason, Macron has thought it essential to maintain a warm relationship with Trump. Now, that seems too difficult to pull off.

Where this will leave Macron—Europe’s most globally ambitious leader—is not yet clear. A canny, highly calculating politician, Macron may have chosen his tough words for Trump with careful deliberation, attempting a new strategy to win him over.

Nardon says that having read Trump’s book The Art of the Deal, she believes Trump might be persuaded to make concessions if the rest of the G-7 leaders stick together and refuse to compromise. That could be in Macron’s mind too, she says.

“Macron tried to be friends, and it didn’t work,” she says. “Both positions are tactics. Now, Macron thinks, ‘I’m going to try the tough guy method, and see if it works better.'”

It just might, she says. “If you read Trump’s book you see if someone won’t give concessions, he will run after them.” 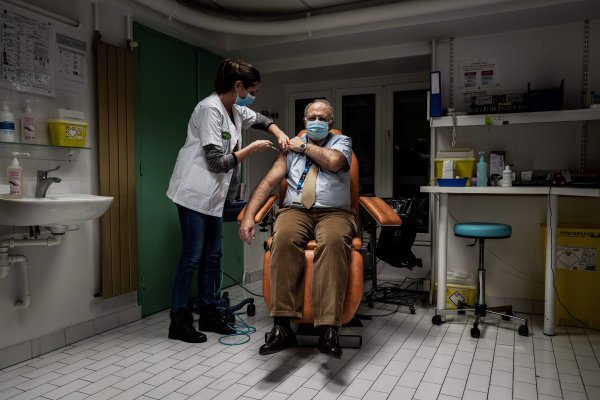