Viral Olive Garden Reviewer on Her Special Bond With Anthony Bourdain After He Came to Her Defense: 'He Was Nothing But Kind'

Anthony Bourdain had countless journeys uncovering overlooked places around the world, from Vietnam to Borneo and Palestine. But one of his most memorable efforts was his work with a restaurant reviewer in Grand Forks, North Dakota.

After Grand Forks Herald dining critic Marilyn Hagerty went viral in 2012 for a review she wrote about Olive Garden (she called it “impressive” and commended the “generous” portion of chicken Alfredo she received), Bourdain quickly stepped out of the hordes of people who gave her a lot of snark for taking a chain restaurant so seriously. Instead, he met with Hagerty and published a book of her columns to which he wrote the foreword.

Bourdain, who died Friday at the age of 61, left a lasting impression on Hagerty, who met him once in New York City after her viral article. Hagerty, 92, told TIME she didn’t know Bourdain at all before her story drew widespread attention online, but that he supported her at an important time.

“People were saying what a funny strange thing it was for anyone to write about the Olive Garden, and all of a sudden Anthony Bourdain came to my side,” she said. “He said he agreed with the people at first, and as he thought about it more, he seemed to appreciate the fact that for people in middle America, it’s part of how we eat.”

Bourdain’s appreciation extended through much more of Hagerty’s work. Grand Forks, North Dakota, doesn’t see many of the food trends or small restaurants that specialize in particular dishes that pop up in places like New York or San Francisco. But for Hagerty, writing about food just means going everywhere, including fast food chains like McDonald’s and Taco Bell, and buffets frequented by truck drivers.

It was Hagerty’s ability to notice such things that prompted Bourdain to suggest she write a book of her columns when they met for coffee at a hotel in New York in 2012.

The meeting resulted in a book: Grand Forks: A History of American Dining in 128 Reviews, which Bourdain published under his imprint with Ecco in 2013. In the foreword to the book he noted that Hagerty’s work is much different than what is written about restaurants in New York or London or Paris. According to Eater, he wrote:

The onslaught of attention on Hagerty has calmed down in the last five years. But Bourdain’s impact on her will never go away.

“All these years, people who didn’t know me were just so impressed that Anthony Bourdain published my book,” she said. “Why would he notice me, in Grand Forks, North Dakota? But he did.”

She added: “To me, he was nothing but kind and a gentleman.” 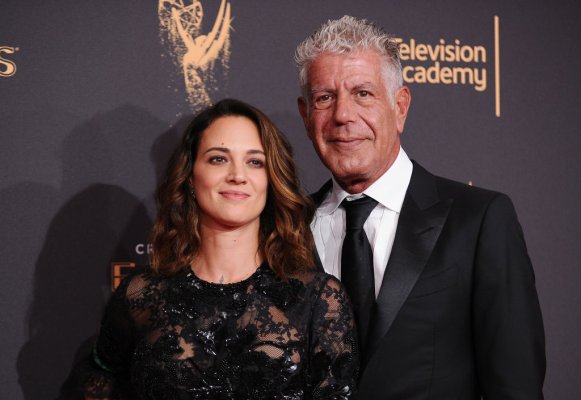 Anthony Bourdain Remembered As an 'Unabashedly Supportive' Advocate and Ally in #MeToo
Next Up: Editor's Pick