Anthony Bourdain was known for showing Americans far-away places like Borneo and Myanmar. But he brought the same curiosity to an often-overlooked corner of his own hometown last year.

Bourdain took his globe-trotting CNN show Parts Unknown to the New York City borough of Queens – which has been called “one of the most diverse places on Earth,” but doesn’t get the same attention as neighboring Manhattan or Brooklyn. One of his guides, local lawyer and community organizer Ali Najmi, will never forget Bourdain’s humility and eagerness to learn.

“The best thing about Bourdain was that he loves the food, but loves the people behind it even more,” Najmi told TIME Friday. “He truly was invested in people and he figured out that food is the connector of people.”

He added: “He researched a place because there was no way he wouldn’t do it justice. I think he showed Queens in all its uniqueness, the people and the community. I think that episode was one of the best the show ever did.”

Bourdain was found dead in his hotel room in France on Friday at age 61. Authorities said the beloved chef, author and TV presenter committed suicide.

Bourdain was born in New York, grew up in New Jersey and called himself a bad New Yorker – admitting that he tended to revisit the same places he had been going to for years.

“It’s irritating to me — embarrassing really — that I don’t know more of Queens — where the Chinese restaurants are better and more numerous than Manhattan’s, where their Koreatown is better than our Koreatown, where cooks and cultures from all over the world collide and mix in glorious ways,” he said in his field notes for the Queens episode of Parts Unknown.

But Queens was not alone in the U.S. for getting Bourdain’s spotlight. He used Parts Unknown to show Americans the weird and wild parts of their own country with episodes on Koreatown in Los Angeles, New Mexico, Detroit, the Mississippi Delta, Montana and West Virginia.

Najmi hooked up with Bourdain for the episode through mutual friend, Queens born rapper Himanshu Suri, shortly after a community rally he was holding in Jackson Heights, a vibrant community dominated by immigrants from all over the world. The chef joined them for a meal at Tibetan restaurant Lhasa Fast Food, located at 37-50 74th Street and chatted about the community.

“He showed people how to be open and learn from one another, his show taught people about others and it wasn’t in a silly, shallow, national geographic way,” Najmi said.

In the Parts Unknown episode, Bourdain remarked that Queens was a perfect lesson for the rest of the nation on the importance of diversity.

“Queens, I hope, is an argument for the founders’ original intent, a place where America still offers the world something of inestimable value: hope. And in return, receives so much,” Bourdain said.

“He was a great man and I cherished the opportunity meeting him,” Najmi said. “He was very encouraging and told me to continue the good work I was doing, he believed in me and I’ll never forget that.” 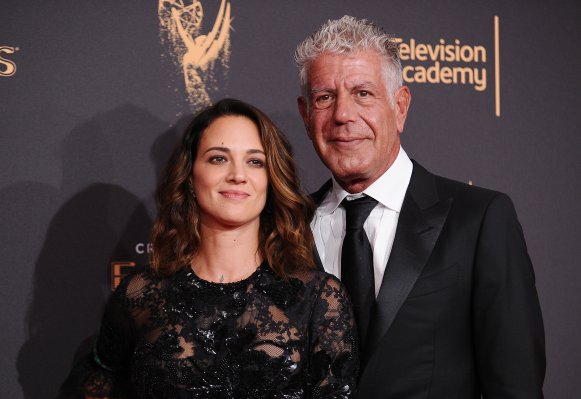 Asia Argento Speaks Out About Anthony Bourdain's Suicide
Next Up: Editor's Pick