Queen Maxima of the Netherlands’ sister was found dead of an apparent suicide at her apartment in Buenos Aires on Wednesday night, according to reports, including the BBC. She was 33.

“It is presumed that it was a suicide,” a spokesman of the Dutch government told the Argentinian newspaper, La Nacion.

Inés Zorreguieta, the younger sister of Queen Maxima, a native Argentinian, worked for the government in Argentina as an official in the Ministry of Social Development.

In a statement to Dutch newspaper, De Volkskrant, the Dutch government said that Queen Máxima is “shocked and devastated” by the news of her sister’s death. According to reports, Inés suffered from depression and mental health issues.

Maxima has canceled all of her upcoming scheduled appearances and is believed to be making plans to travel from Holland to Buenos Aires.

Queen Maxima, 47, married then Dutch Crown Prince Willem-Alexander in 2002 after meeting in Seville, Spain, in 1999 during the Seville Spring Fair. They have three daughters.

Maxima has said that she didn’t know her future husband was a royal when they met, and that he introduced himself as “Alexander.” Their relationship initially resulted in controversy due to the fact that Maxima’s father, Jorge Horacio Zorreguieta, was a controversial figure, who at one point even threatened Maxima’s marriage to Willem-Alexander.

Zorreguieta served as the Secretary of Agriculture the during the dictatorship of President Jorge Rafael Videla (who is now not recognized as a legitimate president by the Argentinian government), as well as the beginnings of the Dirty War, a military regime that saw the disappearance and murder of thousands of Argentinians, according to the New York Times.

Zorreguieta resigned before the end of Videla’s presidency argued that he wasn’t aware of the Dirty War, as he was a civilian during the majority of it. However, public outcry was so strong in the Netherlands that the Dutch Parliament asked an outside expert, Professor Michael Baud to look into the matter. Baud announced that Zorreguieta’s ignorance of the crimes would have been unlikely. The marriage was still approved by Parliament, because Maxima herself was not involved, but Zorreguieta was not permitted to attend their wedding, according to Dutch News. Her mother also did not attend the nuptials, out of respect for her husband.

Though he wasn’t able to attend his daughter’s wedding, as it was seen as a state occasion, Zorreguieta did attend the christenings of all three of his granddaughters, which were considered private, family events.

Last summer, Maxima traveled with her husband and their daughters to attend the funeral of her father, who died in August at the age 89 following a battle with non-Hodgkin’s lymphoma. 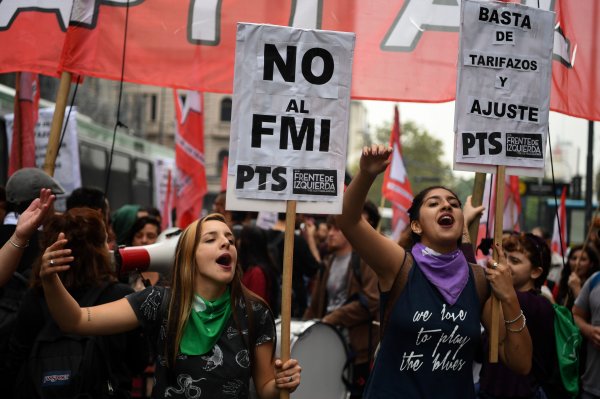 Why Argentina’s Talks With the IMF Are Enraging the Country
Next Up: Editor's Pick