France Is Voting on a Law Banning Fake News. Here’s How it Could Work

French President Emmanuel Macron speaks to the press during a visit in Clairefontaine-en-Yvelines on June 5, 2018.
Franck Fife – AFP/Getty Images
By Ciara Nugent

The ban would apply during the three months preceding an election. Opposition politicians and journalists have called it a threat to democracy and free speech, but Macron says it is necessary to stop the circulation of “lies made up to tarnish political officials, personalities, public figures, journalists.” Here’s what you need to know.

Why is Macron worried about fake news?

The wording of the bill says the law is responding to “the recent electoral climate” in countries like the U.S. and the U.K., where Russian trolls are believed to have attempted to influence votes. Macron is particularly worried about the Russia-owned media outlets Russia Today and Sputnik. In January, while standing next to President Vladimir Putin in Moscow, he attacked them for spreading “lies about me and my campaign” before his election in 2017. False stories about him having secret offshore bank accounts in the Bahamas spread rapidly online in May, a few days before the election.

France already has laws against spreading false information, but the new bill says these are “insufficient to quickly take down online content in order to stop its circulation and reappearance.”

Macron discussed his law with Mark Zuckerberg when the two met one-on-one in Paris in May. Facebook insist they are wholeheartedly co-operating with the president’s war on fake news. “We limit the financial gains of the authors of false information, we delete fake accounts used to spread them, and we work with independent third parties on verification,” Facebook said in a statement to Bloomberg.

How would the new law actually work?

Social media companies would have to allow users to flag stories they think are false. They would then have to tell the authorities and make public what action they are taking. Electoral candidates who spot a false story would be able to call on a judge to decide within 48 hours whether or not to take it down.

It also gives the French Audiovisual Council, the broadcasting body that regulates radio and television, the authority to block foreign state-controlled broadcasters that publish false information.

What do others in France think?

Outside of Macron’s En Marche party, the response has been largely negative. Opposition politicians from both the left and right have expressed outrage about the law. Marine Le Pen, leader of the far-right National Rally (previously the National Front) said it crossed a line between “a good-faith attempt to prevent misinformation” and “indirect censorship” and that it would “infantilize” French people. Jean-Luc Mélenchon, of the hard-left France Unbowed, called it “a crude attempt to control information.”

The media have widely panned the law, both for threatening freedom of speech and for fostering confusion. “The state should not transform itself into a ministry of truth,” journalist Pierre Haski told Le Parisien. “This law poses a real risk, not because it is oppressive, but because of [potential] perverse effects in its implementation. It’s going to be really confusing.”

The legal community has pointed out some logistical flaws. “It takes months of investigation to determine the veracity of some claims,” said Basile Ader, vice-president of the Paris Bar using the example of the offshore bank account allegations against Macron. “A judge might not be able to verify it in 48 hours. It’s going to create a lot of uncertainty and hazard in an area where we need a lot of caution.”

Why does Macron think he can succeed where others have failed?

Countries around the world have been trying to tackle fake news since the issue rose to prominence during the U.S. 2016 elections. Mexico has signed a deal with Facebook to combat the spread of false information through measures like awareness campaigns. The social network has taken out full page ads in Mexican newspapers warning people to question information they see online. In Italy, social media users are encouraged to report fake news stories to the police via a government website.

But Macron has tackled the issue more directly and consistently than most leaders—both through his public statements on Russian state media and his meeting with Zuckerberg. Many suggest his own experience with trolls has made the war on fake news a personal one. He seems determined to develop a more forceful approach than other countries, by putting legal obligations on social media sites. His En Marche party has a big majority in the National Assembly, which will vote on the legislation Thursday evening. If it passes, which is likely, it will then go to Senate to be debated and voted on before it is signed into law. 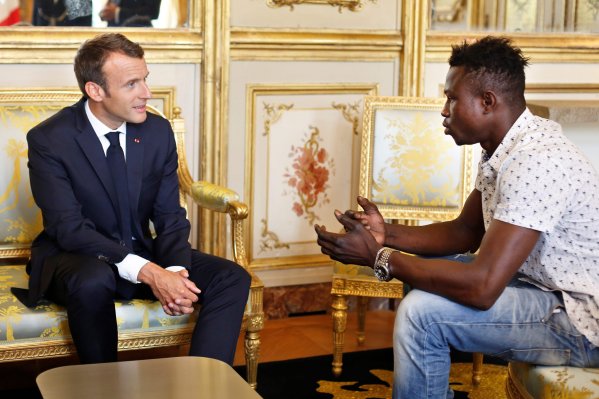 The Mali 'Spider-Man' Was Offered French Citizenship. What About the Muslim Migrants Who Aren't Superheroes?
Next Up: Editor's Pick