Photograph by Adam Ferguson for TIME
By Joseph Hincks/Seoul

Son Heung-min does not look like a man burdened by the weight of national expectation as he strides into a studio in Seoul’s Gangnam neighborhood. The South Korean soccer star changes into his national team shirt and pulls long red socks up over his shins before breaking out his trademark grin for the photographer, eyes sparkling and smile lines crinkling his cheeks. “In every country I’ve gone to, if you smile at people, they are going to be happy. This is my attitude,” Son, 25, tells TIME. A platitude, perhaps, but to this reporter at least, it works.

Son’s natural brightness belies the responsibility he will face as South Korea’s talisman at the World Cup, which will kick off in Russia on June 14. As a forward for the English Premier League’s Tottenham Hotspur club, he has become the top Asian goal scorer in the elite league’s history. And as a two-time Asian Football Confederation Asian International Player of the Year, he is aware that it is not only national pride that’s at stake. The fact that young soccer players across the region are dreaming of emulating his career gives him “goose bumps,” he says. “At Tottenham Hotspur, we can share the pressure, but on the South Korea team, some of the players have more pressure than others,” Son acknowledges. At the same time, though, that stress motivates him. “How many people have pressure like this?” he asks. “I’m such a lucky guy.”

The pressure may be even greater at this World Cup as South Korean soccer’s big outing on the world stage is at risk of being eclipsed by theater of a political kind. The on-again, off-again summit between North Korean leader Kim Jong Un and U.S. President Donald Trump is now apparently on again on June 12, two days before the tournament begins, and the North and South have agreed to hold military talks on its opening day.

The Winter Olympics in PyeongChang in February shone a spotlight on the role that international sports competitions can play in defusing tensions between nations. Following a year of missile tests and saber rattling, North and South Korea marched under one flag at the opening ceremony. The North did not qualify for the 2018 World Cup, but that does not mean Son hasn’t considered playing for a unified team some day. “I dream of it,” he says. “Of course people would be happy to see us playing together because we are one country.”

Soccer’s popularity soared in South Korea after the country co-hosted the World Cup with Japan in 2002. At 9 years old, Son watched, besotted, as the Reds defeated European soccer giants Portugal, Spain and Italy to reach the semifinal stage of the tournament.

Son was soon picked to train with the youth academy at FC Seoul, and left South Korea at age 16 to join German Bundesliga club Hamburg S.V. He later played for Bayer Leverkusen. Those first years in Europe were tough, he says, and though he now speaks German and English, the learning curve was steep.

When he signed for Tottenham at a reported cost of about $30 million in 2015, Son became the most expensive Asian soccer player in history. He has justified his price tag by becoming the team’s second highest scorer this past season. His sunny demeanor made him a hit with his North London teammates, whom he treated to a Korean barbecue buffet shortly after his arrival to the U.K. He says they regularly ask him to perform “Gangnam Style,” the 2012 hit by South Korean pop star Psy. Spurs fans prefer to chant the Beatles song “Here Comes the Sun” when he runs out onto the field.

He has yet to have such success with the Reds since making his senior World Cup debut in Brazil in 2014. South Korea failed to advance beyond the group stages that year, and in a traditional Korean insult, angry fans pelted the players with candy upon their return when they landed at Incheon International Airport.

Son’s national expectations extend beyond soccer. All able-bodied men in South Korea are mandated to start 21 months of military service before age 28, and Son, like many younger sports stars, has yet to perform his. Still, it can become a national scandal when a celebrity is thought to have dodged the draft; after Korean-American pop star Steve Yoo avoided military service by becoming a naturalized U.S. citizen in 2002, he was banned from re-entering South Korea.

For Son, who will turn 26 in July, a two-year absence from the game would mean missing what are usually considered a soccer player’s peak years. The possibility vexes not only South Koreans but also Tottenham Hotspur’s passionate fan base. Asked if it is weighing on his teammates’ minds, Son says military service doesn’t come up often: “I think we are not talking much about that.” His agent cuts off any more questions about the subject. An exit clause for Son exists in the form of the Asian Games, which will be held in Indonesia in August. Gold medalists are exempted from military service, and Son could yet play for the team. Some of his teammates are already exempt from full military service, having taken the field when South Korea won gold at the 2014 Asian Games or bronze at the 2012 Olympics in London.

Son’s first priority, though, is helping South Korea get through a tough World Cup group that includes defending champions Germany and well-regarded Mexico and Sweden. “We are the weakest team in the group, so we need to work more than them. We need to run more than them—then we can surprise people,” he says.

The night before our meeting on June 2, a few hundred South Korean fans had gathered in a plaza in central Seoul to watch Son, captain Ki Sung-yueng and the team play their final domestic warm-up game before the World Cup. In the breezy evening some wore red attire and waved the national flag. But the Bosnia and Herzegovina team easily breached the Reds’ defense, and groans rang out when opposition winger Edin Visca completed his hat trick to end the game 3-1. “Four days ago, we played against Honduras and won 2-0. The press, everyone, was talking about we are doing well,” Son says.“Four days later we lost, and they’re being negative. But that’s football. And we just need to focus on our football.”

Even with Son, South Korea’s odds at the World Cup are long: FIFA ranks the team 61st in the world. And despite the sport’s popularity in the region, other Asian teams fare little better: Japan ranks 60th and China 73rd. (Asia’s women’s teams rank higher.) What would it take to bring Asian nations into contention with the European and South American stalwarts at the top of the FIFA rankings? Hanjin Chun, general secretary of the Korea Football Association, says that while Asian stars like Son playing in Europe drum up enthusiasm at home, “you can’t have every player in your national team playing abroad.” A stronger domestic league “is a must,” he says.

It’s clear that Son enjoys being an elder statesman for the younger players on the squad. He benefited himself from the advice of his father Son Woong-jung, a player in the domestic K-league before he sustained a career-ending injury at age 28. The elder Son helped his son hone his technique, and meticulously drilled his once weak left foot. He also repeatedly warned of how physically and mentally exhausting the game could be. As a kid with big dreams, Son says, that advice went over his head, “but at 25, I know what he means.” Son wears a splint on one of his fingers from a recent injury. A scar runs along the inside of his forearm, which he broke last year helping South Korea qualify for the World Cup.

He’s made less visible sacrifices too: his agent says that when he goes out in Seoul, he wears a cap and a surgical mask—commonly worn here when people are sick—to avoid being mobbed by fans. These are minor costs, though. “I want to play football until my body says, ‘You can’t run any more, you’re dead,’” he says. “Football is my happiness.” And with that, Son’s smile comes beaming back. 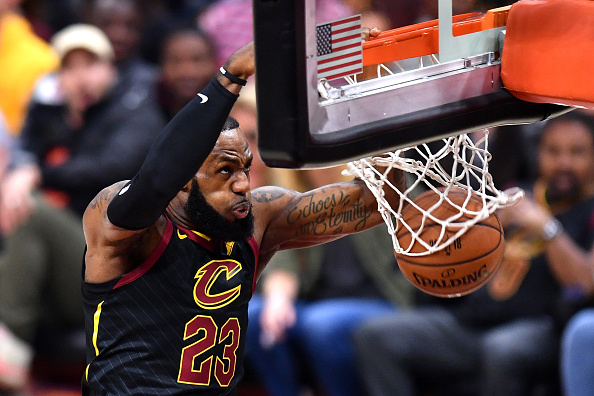 Only LeBron James Would Throw an Alley-Oop to Himself and Then Dunk It in the NBA Finals
Next Up: Editor's Pick