Phillips, at his bakery, smiling after the decision
Joe Amon—Denver Post/Getty Images
Ideas
By Katy Steinmetz

Since same-sex marriage became the law of the land, the battle over LGBT rights has shifted from the altar to the cash register. As wedding vendors have turned away same-sex couples for moral reasons, lawsuits have pitted the right to be served against the right to refuse. The much watched case of Colorado baker Jack Phillips presented a chance for the Supreme Court to draw lines in a tangled debate about free speech, religious exercise and equal treatment in the public square. But while the ruling came down on June 4, many potent legal questions remain unresolved.

The narrow decision arrived six years after a clash at Masterpiece Cakeshop in Lakewood, Colo., when Charlie Craig and David Mullins asked Phillips to make them a custom wedding cake and he declined, citing his religious opposition to same-sex marriages. When the couple filed a complaint under a state law that prohibits discrimination based on sexual orientation, Colorado agencies ruled in their favor. In a 7-2 decision, the Supreme Court reversed course and sided with the baker–but not because the state agencies necessarily came to the wrong conclusion. The key reason was that officials showed “elements of a clear and impermissible hostility” toward Phillips’ religious beliefs while considering the case, Justice Anthony Kennedy wrote in the court’s majority opinion. One piece of evidence the Justices pointed to was a commissioner who “disparaged Phillips’ faith as despicable.”

The legal team representing the couple emphasized that while they may have lost, the other side did not get the broad win some conservatives hoped for: a blanket assurance that religious freedom trumps antidiscrimination measures. On a conference call, American Civil Liberties Union attorney James Esseks highlighted language that acknowledged the civil rights of gay Americans. “Our society has come to the recognition that gay persons and gay couples cannot be treated as social outcasts or as inferior in dignity and worth,” Kennedy wrote, adding that business owners cannot be allowed to “in effect” put up signs saying that “no goods or services will be sold if they will be used for gay marriages.”

The ruling was still a win for those who believe religious freedom is under attack. Some Christians feel they’re unfairly victimized for holding the increasingly unpopular opinion that same-sex marriage is wrong, and the Supreme Court decision is fuel for their fires. “They really quashed the playing of favorites,” says Nicolle Martin, Phillips’ lead counsel in Colorado. “If somebody has a sincere conviction, you can’t dismiss it.” The clearest message of the decision may be that government officials had best be careful as they continue to referee these fights.

Among the questions that remain unanswered: Does forcing a baker to make a cake for a same-sex wedding violate the baker’s rights to free speech? Is making a cake a form of speech? If another gay couple came into Masterpiece Cakeshop today and asked for a wedding cake, would Phillips be within his rights to refuse them? Experts say it remains unclear. “Whatever the outcome of some future controversy involving facts similar to these,” Kennedy wrote, the Colorado ruling must be set aside because it was not the result of “neutral and respectful consideration.”

There will certainly be future controversy: among the cases the Supreme Court may soon hear is one involving a florist who refused to provide flowers for a same-sex wedding in Washington State. (The state ruled for the couple.) Some LGBT-rights advocates believe that the ruling itself will generate more litigation–that despite the caveats, the fact that the baker won will embolden more religious business owners to turn away LGBT people, who may in turn have cause to sue. “This Supreme Court opinion invites a lot more discrimination to test the contours of these legal principles,” says Jennifer Pizer, law and policy director for the LGBT civil rights organization Lambda Legal.

After the ruling, Mullins and Craig vowed that “our fight against discrimination and unfair treatment will continue.” As for Phillips, he was back at his shop, serving supportive customers. When asked, Martin said the baker was thrilled about the ruling and “very thankful” to higher powers. 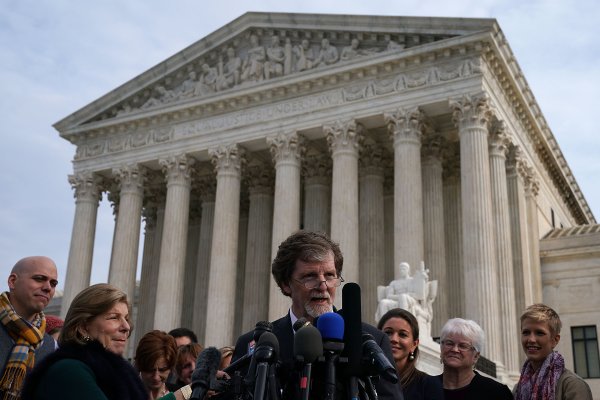 Colorado Baker Insists He's Not Biased Despite Cake Case
Next Up: Editor's Pick