Perhaps every era gets the horror movies it doesn’t yet know it deserves, pictures that seep into our souls even before they infiltrate our minds. Ari Aster’s debut feature Hereditary is a movie for the mood of today, unsettling in its arid, controlled creepiness, but largely distinguished by Toni Collette’s intricately layered lead performance, a portrayal of a woman whose love for her family spirals into mad decay. Collette plays Annie Graham, an artist and mom who comes to learn that she’s carrying a terrifying multigenerational secret–that she is, in effect, passing along a curse to her children, the very people she has been entrusted to protect. As the movie opens, Annie is mourning the death of her mother Ellen, a remote, secretive woman who didn’t exactly foster warm fuzzies when she was alive. There’s early evidence that Ellen was involved in some sort of cult: we see Annie fingering a pendant she wears around her neck, a strange swirly symbol that was also of importance to her mother. And as she goes through Ellen’s effects, Annie finds a note her mother had written to her years ago: “Our sacrifices will pale next to the rewards. Love, Mommy.”

Hereditary posits that ghosts live inside all families, whether we welcome them or not. Annie’s grief for her mother is on the more conflicted end of the mourning spectrum: “Should I be sadder?” she asks her almost mechanically supportive husband Steve, played by a stalwart Gabriel Byrne. Their daughter Charlie (Milly Shapiro), an odd loner of a child who, from some angles, looks like a very old man from some forbidden fairy-tale wood, takes Ellen’s death harder: she and her grandmother were close. When Charlie snips the head off a dead bird with a pair of scissors and tucks the bloody little treasure in her pocket, you get the feeling you know where her weirdo impulses come from.

Meanwhile, teenage son Peter (Alex Wolff) seems like the group’s outlier, a kid who’s more interested in getting high with his friends than getting tangled in his bummed-out family’s problems. But the whatever-it-is that lies in wait for the Grahams will spare no one. In the end the plotlines of Hereditary don’t totally connect as well as they should. But the movie still succeeds on the strength of its sustained tension. Aster, who also wrote the script, builds a shaky ladder of dread that takes you higher than you’d probably like to go.

Like all genres, horror movies have a way of reflecting the era in which they were made: sci-fi horror films of the 1950s like Invasion of the Body Snatchers and Them! riffed on American anxiety over nuclear experimentation and the threat of communism. The zombie-movie explosion of the 1970s, ’80s and beyond was launched by George Romero’s 1968 stark, super-low-budget Night of the Living Dead, in which the hero (and only decent man) was a black guy–the movie was a blunt expression of the unrest and frustration then clawing away at our not-even-close-to-being-integrated country. Joseph Ruben’s The Stepfather (1987), about a seemingly normal guy–based on real-life fugitive killer John List–who murders his family because it fails to meet his perfectionist standards, is the quintessential Reagan-era chiller, a parable about the illusory nature of order and prosperity. (The picture was remade, badly, in 2009.) In some ways, Hereditary is The Stepfather‘s spiritual heir: there’s nothing overtly political about it, but essayists of the future–and probably even some from next week–are sure to see in it evidence of contemporary American helplessness. It’s a movie about feeling small and inconsequential in the larger pattern of danger churning all around us. Those who see it as timely won’t be wrong.

Hereditary is among the films forming the swell of a new wave in horror, pictures that are smart, subtle and artfully made. That’s not to say cheap, fast, comfortingly predictable horror pictures–like the myriad slasher movies that emerged in the late 1970s and early ’80s, in the wake of Halloween and Friday the 13th–don’t have value. Their brash energy counts for a lot, and in horror movies, especially, too much highfalutin artiness can just end up being a chill-killer. But for too long, the horror landscape has been dominated by the grisly sadism of Saw (2004) and its numerous sequels and imitators, as well as by the faux-DIY aesthetic of found-footage exercises like The Blair Witch Project (1999). The ugly brutality of the former and the winking self-consciousness of the latter have both run their course.

But Hereditary, along with other fairly recent movies like Jordan Peele’s ambitious Get Out and John Krasinski’s clever A Quiet Place—as well as earlier ones like Jennifer Kent’s 2014 mom-gone-mad feature The Babadook and Robert Eggers’ 2015 homespun goat-worship tableau The Witch, suggest we’re in the midst of a horror renaissance. Yet to call it that suggests that horror movies are only now worthy of being taken seriously, when that clearly isn’t the case. This shift is about something else: I often hear people say, “I can’t tolerate horror movies,” because they’re thinking exclusively of slasher films, or of Saw and its ilk. But what about Robert Wise’s 1963 Shirley Jackson adaptation The Haunting, which terrifies only by whispery suggestion? Or Alejandro Amenábar’s bleak, elegant thriller The Others, from 2001, featuring Nicole Kidman as a wary matriarch drifting through a haunted house with her two young children? Then there’s Dario Argento’s outrageously opulent 1977 Suspiria, a wiggy marvel for its production design alone. Style is a language, and to turn away from Suspiria‘s fuchsia-blood-splattered, art nouveau gothic bordello-a-go-go aesthetic is to deprive yourself of one of moviedom’s great visual pleasures. (Call Me by Your Name director Luca Guadagnino clearly feels that way too; he’s making his own version of the film, set to be released later this year.)

Saying “I don’t like horror movies” is like saying “I don’t like love stories.” You just haven’t met the right one. Maybe it helps to draw some lines, even if they’re wavy, mutable ones, between supernatural horror, psychological horror and pure gore. There are just some experiences you don’t want to put yourself through: I’ve heard enough about Ruggero Deodato’s allegedly lurid and bloody 1980 Cannibal Holocaust to know that I never want to see it.

Hereditary does have some scenes that could qualify as gory, or maybe just icky. But they’re not the movie’s chief reason for being. Aster also strives to map the sometimes unnavigable pathways connecting mothers and daughters, mothers and sons, husbands and wives. And like other movies in this new wave of horror, as in many great horror movies before it, Hereditary makes room for its actors, and that makes a difference. Wolff, as the zonked-out teenager who later becomes all too plugged in, is one of the movie’s stealth weapons: he captures the feeling of wandering through that weird bardo of adolescence, a time when you’re going around in a body that allegedly belongs to you yet hardly feels like your own.

But Collette is the soul of Hereditary. Even when this movie hits peak dour overdrive, she remains its true north. Her Annie is a respected gallery artist who makes dollhouse-style dioramas depicting the routines of everyday life rendered in miniature. Annie’s work becomes even more personal as she reckons with her mother’s death–she seems to be trying to burrow into the tiniest corners of complex feelings. But Collette’s finest moment–a brief sequence in which you can barely see her face, an instance of a performer channeling pure, electric feeling through her very being–is an expression of grief so distilled and intimate it made me want to look away. The moment is captured in a wide shot, which means that the two figures in it, Annie and Gabriel Byrne’s Steve, look smaller than life rather than larger, a bit like the tiny, static humans that people Annie’s artwork. Annie’s suffering is so intense that she’s doubled over; she’s keening, though it’s the kind of wail where you can’t be sure sound is coming out. There’s some creepy, spooky stuff in Hereditary, images and ideas that just might surface in your nightmares. But the radical, undiluted humanness of Collette’s performance is the movie’s most haunting effect. There’s nothing supernatural about it. Call it the best humans can do without witchcraft. 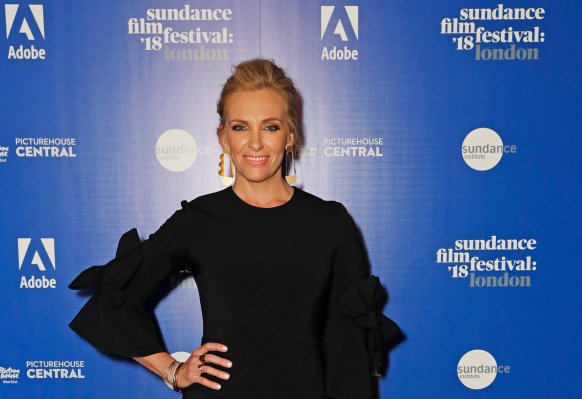 Toni Collette on Going Maternal and Maniacal for Her New Horror Hit Hereditary
Next Up: Editor's Pick