The Global Water Crisis: Why Are India’s Taps Running Dry?

Towards the end of May, one of India’s most popular summer retreats nearly ran out of water.

Shimla, a historic hill town in the northern state of Himachal Pradesh, is the latest addition to a list of Indian towns and cities that are starved for water. Earlier this year Bangalore, home to the country’s information technology sector, made it to a list of world cities most likely to run out of drinking water. It joins other parched metropolises like Cape Town, Jakarta and Sao Paolo.

Residents of Shimla had to wait nearly four days to get water, with many lining up with buckets to collect water from tankers. The situation worsened over the following week, pushing authorities to close state schools for five days and to ask tourists to stay away.

India is reeling under a sustained water crisis that shows no signs of abating. Excessive demand coupled with mismanaged water resources, erratic weather patterns and climate change have led to a sad state of affairs.

Water disputes abound within the country and among its neighbors. Six Indian states are involved in battles over the river waters of the Yamuna in the north, the Narmada in the midwest and the Cauvery in the south. Meanwhile, India is also dealing with Pakistan and Bangladesh over water usage.

There is not a single Indian city that can provide potable water from its taps. In fact, a 2018 report from global advocacy group WaterAid put India at the top of its list of countries with the worst access to clean water close to homes—163 million Indians live this way.

The country’s dependence on agriculture, which forms a significant part of its economy and employs about 800 million people, cripples water management even further—especially given the unpredictable monsoons.

With the rainy season just beginning in India, here’s a look at the water crisis in the world’s second most populous country.

How bad is it?

According to government data, the average annual per capita water availability fell 15% between 2001-2011. It’s predicted to fall another 13% by 2025 and 15% again by 2050, which means that in another 30 years each Indian household will have about 1.1 million liters of water per year, down from 1.8 million liters in 2011. (A country is considered to be suffering from water scarcity when availability is less than 1 million liters per capita per year.)

The news doesn’t get better when you consider that India’s burgeoning population could grow to 1.8 billion, if current fertility rates continue, and that agriculture is a major part of the Indian economy.

Already farmer suicides are a common occurrence. Farmers usually take heavy loans to purchase seed for sowing and many take their lives when they are unable to pay their debtors if their crops fail. A common cause of this is drought and lack of access to irrigation facilities. A 2017 study found that nearly 60,000 farmers had committed suicide in the past three decades due to climate change. The study found that even a 1cm increase in rainfall led to a 7% drop in suicides.

Drastic measures are being taken to deal with the crisis. In the past, armed guards have been stationed at reservoirs to prevent water theft and trains have been used to transport water to suffering areas. In March this year, the state of Gujarat stopped the supply of irrigation water from a major dam to ensure there was enough for drinking purposes.

Unfortunately, unchecked pollution has turned thousands of water sources into bodies of filth and disease. The Ganges, one of India’s most famous and important rivers, is in such a terrible state that Prime Minister Narendra Modi has set up a special task force to clean it up. In the south, Bangalore’s Bellandur Lake is so toxic that methane fires are often seen on its surface.

Why is it so bad?

To put it simply, there’s too much demand and not enough supply. India’s burgeoning population woes aside, climate change is seen as a major factor in the country’s water crisis. Scorching summers and shortened winters have resulted in reduced snow cover and retreating glaciers in the Himalayas—the ice melt from these areas is what feeds the country’s northern rivers. Add to that fickle monsoons that threaten to disrupt long-established crop patterns and you have a recipe for disaster in many parts of the country.

Then there’s agriculture, which, by some estimates, accounts for 90% of India’s water consumption. Farmers are sometimes slow to change what they sow and continue to grow thirsty crops like rice and sugarcane in parched regions. They meet these irrigation demands by indiscriminately extracting groundwater, which some say accounts for a quarter of the world’s groundwater usage.

Read more: What It’s Like to Live Through Cape Town’s Massive Water Crisis

This has led to a substantial drop in the levels of India’s water table, which is a major concern. There has been a 61% decline in the country’s water levels from 2007 to 2017. Rajendra Singh, a well-known water conservationist nicknamed “India’s waterman,” has said that over 70% of the country’s groundwater is in “overdraft”, implying that more water is consumed than is replenished.

Water pollution and poor resource management have also contributed to limited availability. A study of Delhi’s piped water systems a few years ago found that 40% of the city’s water is lost due to pipe leaks and thefts via unauthorized connections.

For starters, India can look to Israel and Singapore.

Israel is a poster child for sustainable water consumption in the world. The largely arid country has implemented a centralized water management system, set up desalination plants, encouraged the use of treated waste water for farming and propagated the idea of drip irrigation, which involves dripping water onto the roots of crops rather than flooding entire fields.

Similarly, Singapore has been very smart about meeting its water needs efficiently. In addition to desalination and the use of recycled waste water, the city-state gives priority to building reservoirs and catchments to collect as much natural water as possible. According to the government, water catchment areas now cover two-thirds of Singapore’s surface area, up from half in 2011.

It might also be time to reconsider what is grown and investigate if there are better ways to cultivate those crops. Many of India’s important agricultural products, such as rice, wheat, sugarcane and cotton, are incredibly water-intensive, but their propensity for a high yield makes them more popular than other environmentally friendly options.

Steps are being taken to alleviate water problems. Last year, Prime Minister Narendra Modi announced an $87 billion plan to link 60 rivers across India in an attempt to provide better irrigation sources and reduce flooding, though its efficacy remains to be seen. Some Indian states, like Maharashtra—the home state of Mumbai—have chosen to implement Israel’s drip irrigation method for entire crops like sugarcane. In the same state, cultivators have dug “farm pools” to harvest rainwater for sustained irrigation purposes in small areas.

There is some cause for optimism. WaterAid, the NGO that ranked India among the worst country for household drinking water access, has also ranked it one of the most-improved nations in terms of the numbers of people able to access clean water as a result of initiatives made since 2000. But major changes need to be made to save the world’s second most populous nation from running dry. 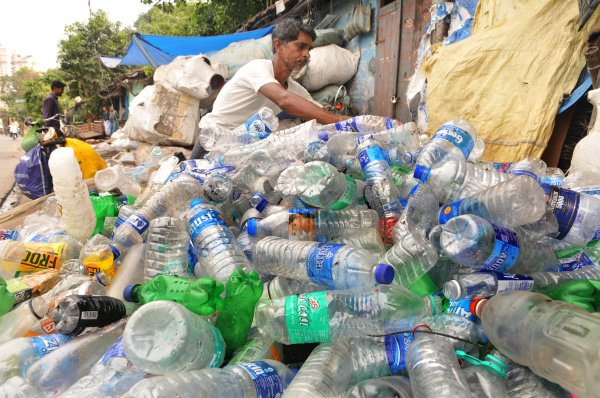 India Vows to Abolish All Single-Use Plastic By 2022
Next Up: Editor's Pick