Philadelphia Eagles safety Malcolm Jenkins and his teammates will continue to fight for “racial and social equality,” according to a statement released by Jenkins shortly after President Donald Trump said the Eagles were “unable” to attend a ceremony at the White House.

The ongoing feud between the White House and numerous NFL players—who Trump has repeatedly criticized for kneeling in protest during the national anthem—came to a head this week, when the President released a statement saying the Eagles were “unable” to make the traditional White House visit following their Super Bowl LII win over the New England Patriots. Numerous Eagles players, including Jenkins, had said they would not make the trip.

In his statement on Tuesday, which he tweeted along with “#TheFightContinues,” Jenkins wrote that he and his teammates have made, and will continue to make, an effort to improve their communities and the country as a whole. “We do it because we love this country and our communities,” Jenkins wrote. “Everyone, regardless of race or socioeconomic status, deserves to be treated equally.”

“Simply google: ‘How many Philadelphia Eagles knelt during the national anthem last season?’ and you will find that the answer is zero,” the statement says. “A similar google search will show you how many great things the players on this team are doing and continue to do on a daily basis. Instead the decision was made to lie, and paint the picture that these players are anti-America, anti-flag and anti-military.”

In his statement on Monday, Trump said the Eagles’ ceremony would be replaced with one “that will honor our great country, pay tribute to the heroes who fight to protect it, and loudly and proudly play the National Anthem.” 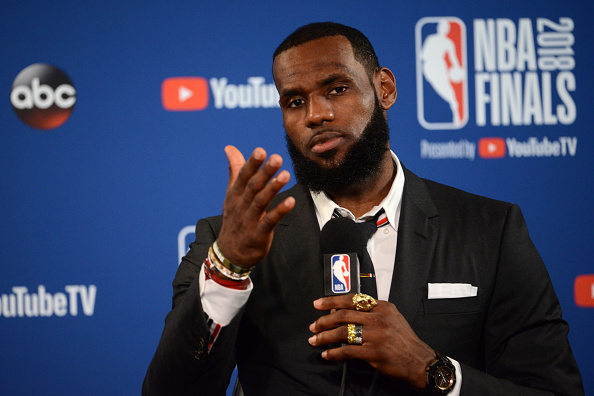 'Typical of Him.' LeBron James Did Not Hold Back About Trump Canceling the Eagles' White House Visit
Next Up: Editor's Pick