Robert F. Kennedy (1925 - 1968) smiles as he holds the hand of an out-of-frame supporter as he campaigns for the democratic Presidential nomination in Indiana, early May 1968.
Andrew Sacks—Getty Images
By David Margolick

Robert F. Kennedy was notoriously hard to know, but one night 50 years ago, an undergraduate named Patricia Sylvester encountered him at his most vulnerable, and unguarded, and revealing. Today, however, as the half-century anniversary of his death prompts widespread revisionism and hagiography — at a moment when her insights into the man might matter — she is nowhere to be found. Where is Pat Sylvester when we need her?

It was around one in the morning of May 8, 1968, a few hours after Indiana’s presidential primary was decided. Bobby Kennedy had won that night, but with everything else going on, he’d forgotten to eat. And, in what was then (and remains still) a source of irritation to nocturnal, hungry New Yorkers on the road, late-night dining options, even in state capitals, were limited. “The only place in Indianapolis where you can get even a glass of water after 1 a.m. is the airport,” huffed Jimmy Breslin in a column that appeared in the New York Post shortly after. So that’s where Kennedy, and Breslin, went.

In its empty corridors, Kennedy encountered two college kids, a young man and woman, campaign workers for Senator Eugene McCarthy, who’d just finished second to Kennedy in that day’s primary. The two were making their dejected way home but, having missed their respective flights, were hunkering down for the night. He was Taylor Branch, who would later become one of Martin Luther King’s most celebrated biographers. She was Pat Sylvester.

Kennedy had beaten McCarthy all right, but it was a rather joyless victory: he’d had to win simply to continue his quixotic quest. The pundits were unimpressed. “He made the painful discovery in Indiana that it is dangerous for him to do what he does best — that is, commiserating with the blacks and the poor and lashing out against injustice,” wrote the veteran Kennedy watcher Mary McGrory in the Washington Star. What he’d learned in Indiana, she said, was that “not enough people like him.”

But something else gnawed at Kennedy that night besides his lukewarm performance and poor prospects. Increasingly since his brother’s assassination, he’d identified with — and appealed to — the young. When he’d denounced apartheid in South Africa two years earlier, for instance, it had been to college students there. But the best and the brightest in this presidential campaign belonged to McCarthy, who’d taken on President Lyndon Johnson while RFK dithered. Kennedy could, and did, enthuse students at podunk colleges. But to more cerebral Ivy League types, the bright idealists he coveted, he was an entitled opportunist.

As one of McCarthy’s daughters once put it, Kennedy had the “leapers and the screamers”; her father had the “thinkers and the doers.” Making matters worse for Kennedy was that he considered McCarthy an unprincipled dilettante, using the very people who worshiped him.

The night before the vote, at an Indianapolis restaurant called “Sam’s Attic,” three McCarthy volunteers had given Kennedy the cold shoulder. “Someone at the table said the McCarthy kids were ‘better’ than the Kennedy kids,” wrote Village Voice reporter and Kennedy adviser Jack Newfield. “Robert Kennedy shook his drooping head affirmatively. ‘They’re brighter, more radical, more committed than yours,’ the reporter persisted, and Kennedy nodded agreement again. ‘I wish I had some of them,’ he finally said.”

So, 24 hours later, in the gloomy airport lobby, when Kennedy spotted Taylor Branch sporting two McCarthy buttons on his tan jacket and Pat Sylvester wearing a straw hat with a red McCarthy ribbon tied around it, he saw an opportunity. Kennedy walked up to Branch, tapped him on the shoulder, and asked to speak with him. As Breslin told the story, Sylvester removed her hat and tried placing it on Kennedy’s head. “Do you care for something to eat?” he asked them. “The girl looked at the boy,” Breslin wrote. “He shrugged. ‘All right,’ she said.”

“You had such cruddy canvassers and you still won,” Sylvester told Kennedy, as Newfield would later recall in his book RFK: A Memoir. Kennedy said they couldn’t blame that on him. When he asked her how people like her felt about the election results, she told him she was going to remain on the campaign, and predicted most of the others would, too.

So Kennedy canvassed, and challenged, his focus group of two. The student campaigners said they cared about black voters—so why were they supporting someone who, as Kennedy put it, couldn’t “go into a ghetto”? What about his opposition to extending the minimum wage to farm workers? The two volunteers stuck to their guns, and the more they did, the more impressed Kennedy was.

Truth be told, though, he’d impressed them, too. Kennedy, Branch told Tom Shea of the Springfield Republican in 2011, “had zero interest in boiler-plate. He didn’t use political-speak.” He told them that McCarthy wasn’t serious, that he was toying with them. They also discussed Vietnam. Kennedy “kind of neutralized me,” Branch later said. “I still worked for McCarthy, but I was drawn to Kennedy because of his flair and [his] passion for the black people.”

Their meal over, Breslin wrote, Kennedy insisted he’d find rooms for the two students and make sure they caught their planes in the morning, but Branch recalled that they stayed put in the airport. And once Kennedy had departed, they proceeded to write him a letter — “a treatise, really,” Branch told Shea, one that “basically rehashed all the earnest points we had made to him, while also rehashing how much we respected RFK’s candor and commitment.”

They’d finished it around dawn. They then headed for the nearby motel where Kennedy was staying and, astonishingly, slipped it under the door to Kennedy’s room or an aide’s: Branch can’t remember which. It’s unclear whether Kennedy ever got it, or where it eventually landed. Perhaps it’s the John F. Kennedy Library; half a century on, Bobby’s family still hasn’t opened up all his papers. More likely, it never made it out of Indianapolis.

Like Sylvester and Branch, Kennedy, too, left Indiana the next day — for primaries in Nebraska, Oregon and California. But those two McCarthyites stuck with him. “For days afterward, he talked about that boy and girl in the airport coffee shop — how great they were, in their idealism and determination,” Kennedy’s campaign manager, Fred Dutton, later told a reporter. “Gosh, those kids are great,” Kennedy told Richard Harwood of the Washington Post. He surely remembered them for the rest of his life, since that was only four weeks long.

Taylor Branch is easy to find these days, but Pat Sylvester has eluded those who have looked for her. Branch tried, without success. So did Tom Shea. And, as I worked on a book about Martin Luther King and Robert F. Kennedy, so did I.

The leads are few, and conflicting. Breslin described Sylvester as a freshman at the University of Massachusetts; Branch, who didn’t know her before that day, recalled that she went to Pembroke, which was later swallowed up by Brown. It doesn’t much matter: neither school has any record of her. She hailed from Milton, Mass., Breslin claimed, but calls revealed she didn’t attend the local high school, nor several private schools nearby. None of the McCarthy volunteers in Indiana I contacted remember her. It’s enough to make you wonder whether she ever really existed.

Why should it even matter? So storied has Robert Kennedy’s last campaign become that any fresh account of it, and particularly of that poignant airport encounter, would be precious. Mostly, though, she might help answer the ultimate question about Bobby Kennedy: whether, had fate been kinder, he would have been elected President of the United States in November 1968.

A half century after his murder, the debate rages on: through the sheer force of his personality, along with all that residual affection and grief for his brother, could he could have overcome the dire electoral math, which favored a party regular like Hubert Humphrey over an insurgent like him? Pat Sylvester might help resolve this conundrum. In the wee hours of that day in May 1968, she embodied the obstacles Kennedy still faced — the suspicion and resentment he generated as surely as the adulation. If, by the time he died, he’d changed her mind, perhaps he’d have changed enough others. Maybe, finally, someone will find Pat Sylvester — and find out.

David Margolick is a contributing editor at Vanity Fair and author of The Promise and the Dream: The Untold Story of Martin Luther King, Jr. And Robert F. Kennedy 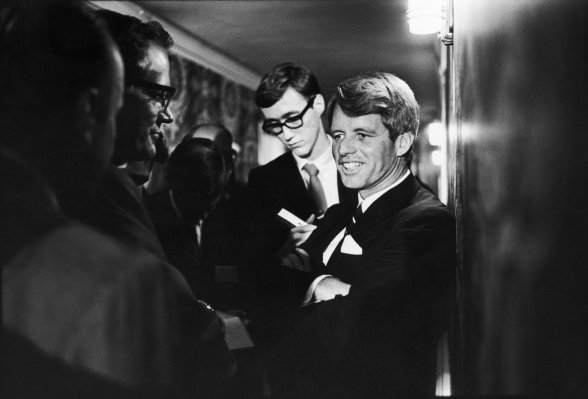 Robert F. Kennedy Is Remembered as a Liberal Icon. Here's the Truth About His Politics
Next Up: Editor's Pick