No Philadelphia Eagles kneeled or raised a fist during the national anthem at the Super Bowl in early February, which the Eagles won in a thriller, 41-33, over the New England Patriots. No Patriots protested either. During the 2017 season, two Philadelphia players, Malcolm Jenkins and Rodney McLeod, raised their fists during the anthem as a demonstration against social injustices. Another, defensive lineman Chris Long, put his hands on Jenkins’ shoulders, as a show of support.

But here at the Super Bowl, America’s greatest sporting spectacle and most massive television event, no one protested. All season long, the anthem controversy — which President Trump stoked by calling any player who protests a “son of a bitch” — overwhelmed the NFL’s billionaire owners. So a Super Bowl sans protests was a welcome relief. Philadelphia’s first-ever Super Bowl victory, and Tom Brady’s butterfingers, made the headlines. The anthem issue was fading fast.

That game now feels like it was played ages ago. The anthem’s back in the news, and the NFL has only itself to blame. On May 23, the NFL decided to release a confounding policy; the league will fine a team if a player does not “stand and show respect for the flag and the Anthem.” But at the same time, players can stay in the locker room during the anthem, rather than stand on the sidelines while the Star Spangled Banner is played. The policy angered both people who consider the anthem protests exercises in free speech, and those who feel all players should be required to stand. The league needlessly put the anthem back in the national conversation.

The president, meanwhile, declared victory, suggesting those who won’t stand for the anthem “shouldn’t be in the country.” Vice President Mike Pence tweeted “#winning” after the new NFL policy was announced.

The NFL gave Trump another opening to seize on the anthem issue and, predictably, he took advantage. On Monday, Trump announced that he had canceled Philadelphia’s planned ceremonial visit to the White House, which was supposed to take place Tuesday. “The Philadelphia Eagles are unable to come to the White House with their full team to be celebrated tomorrow,” Trump said in a statement. “They disagree with their president because he insists that they proudly stand for the national anthem, hand on heart, in honor of the great men and women of our military and the people of our country.”

Read more: Inside Donald Trump’s Latest Battle Against the NFL

Several members of the team, like Long, have been critical of the president and said they wouldn’t attend the ceremony. “No one refused to go simply because Trump “insists” folks stand for the anthem,” Carolina Panthers wide receiver Torrey Smith, who played for the Eagles last season, wrote on Twitter.

The NFL now has a self-inflicted Trump problem. No owner, whether he supports the president or not, wants a politician dominating his game. The owners have obsessed over Trump’s reactions to the actions of their players. Trump loomed over the new anthem policy, and he’s taken control of a typically harmless event, the champions’ visit to the White House. The owners are all about Trump. The rules are all about Trump.

This month, the NBA is enjoying its championship series, and the outstanding exploits of LeBron James and Stephen Curry, while captivating basketball fans with an almost comical storyline about the alleged Twitter burner accounts of a team executive. Baseball’s showcasing the resurgent New York Yankees — a more benign divisive institution — and Shohei Ohtani of the Los Angeles Angels, a once-in-a-century talent both on the mound and at the plate. Meanwhile, the NFL is all-Trump, all the time.

In their clumsy attempt to eradicate anthem protests from the game, NFL owners hoped to return Sunday afternoons to a refuge from the real world. Instead, sticking to sports will be near impossible. The controversy will continue for the foreseeable future. Colin Kaepernick and Eric Reid — two capable performers who knelt during the anthem, and are now unemployed — have filed collusion grievances against the league. At the start of the NFL season, media will be keeping score. Who stayed in the locker room during the anthem? Who defied the president and the NFL, kneeled during the anthem and earned their team a fine?

Donald Trump once failed in his bid to buy the Buffalo Bills. No matter. As president, he has more than a seat at the NFL table. He’s calling the shots. 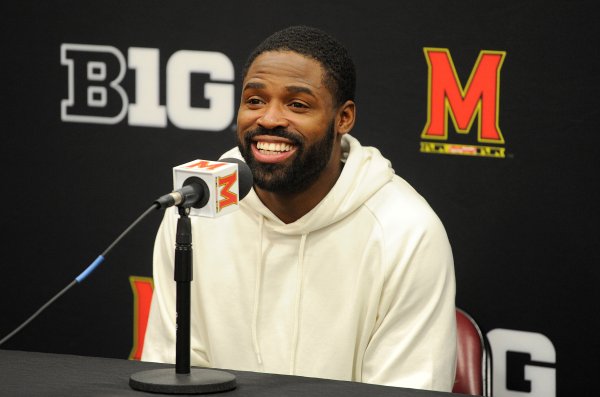 Torrey Smith Responds to Reversal of White House Invite
Next Up: Editor's Pick