Billionaire industrialist Charles Koch on Tuesday announced his brother David Koch is stepping away from a day-to-day role with the family’s business for health reasons and is expected to take similar steps to unwind his involvement with the advocacy machine the Kochs have used to shape American politics.

Charles Koch made the announcement via an email message sent to Koch Industries employees and obtained by TIME.

“We are deeply saddened by this, as we miss David’s insightful questions and his many contributions to Koch Industries,” Charles Koch wrote. “His guidance and loyalty, especially in our most troubled times, has been unwavering. David has never wanted to anything for himself that he hasn’t earned, as his sole desire has been to contribute.”

The tiptoe toward retirement carries far greater importance than the typical executive turnover. At Koch Industries, David Koch, age 78, carried the title of executive vice president, but his role — and partnership with his brother — gave him great sway over a conglomerate that employs 120,000 people and makes everything from Stainmaster carpet to Lycra cloth to Dixie paper cups and Sparkle paper towels, not to mention vast enterprises with petrochemicals. The industrialist was a force outside of the corporation, as well, given his deep pockets and unflinching confidence in the power of free societies.

Read More: Charles and David Koch on the TIME 100

Koch, who is tied with brother Charles on the lists of the world’s richest individuals, has been a patron for causes as varied as the arts, medicine and public policy. Forbes estimates each brother has a wealth valued at $52 billion. David Koch has given at least $1.3 billion of his fortune to charitable causes, including the David H. Koch Center for Cancer Care at New York’s Memorial Sloan Kettering Cancer Center, the David H. Koch Cancer Research Building at Johns Hopkins University in Baltimore and the David H. Koch Theater, the Lincoln Center home for the New York City Ballet and the American Ballet Theatre.

While David Koch was the Libertarian nominee for vice president in 1980, he shared little of his brother’s political zeal. In recent years, Charles Koch has been the face of the political machine that includes Americans for Prosperity, Concerned Veterans for America and the Libre Initiative. At recent twice-a-year gatherings for likeminded patrons of these groups, David Koch has been noticeably absent.

Known simply as the Koch Brothers, Charles and David have been the object of obsession across the political spectrum. Their checkbooks — and their abilities to recruit likeminded patrons — have largely helped conservatives, although this week they announced they were stepping up their game against President Donald Trump over his efforts to drag the United States into a trade war. The groups operating under the Koch banner have also run ads against Republican members of Congress for not doing more to constrain federal spending.

Officials said David Koch would transition to a director emeritus role at the company, the second largest privately held firm in the United States. He is not expected to give up his stake in Koch Industries at this time.

On the political side, officials confirmed David Koch would be stepping away, as well.

“Due to health reasons, David Koch will be resigning from the board of Americans for Prosperity Foundation,” said Mark Holden, a longtime Koch lieutenant who is co-chairman of the political hub. “We greatly appreciate his vital role on the board and all that he has done to help us build a strong foundation for our future success.” 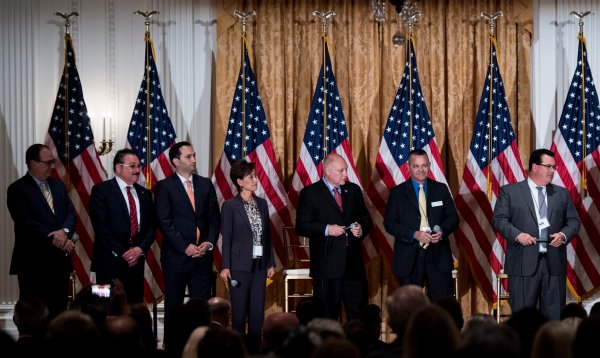 California Democrats Brace for Primary
Next Up: Editor's Pick