Taylor Bennett Opens Up With Bold, Buoyant New Single 'Be Yourself'

Taylor Bennett is Chance the Rapper‘s younger brother. But on “Be Yourself”— the debut single from his upcoming third EP, premiering here on TIME — the 22-year-old rapper is out to prove that he’s got a style and story all his own.

Over a bright, warm beat, Bennett narrates everything from his youth and challenges in school to his family’s path on the south side of Chicago and his own struggle to fit in without compromising his identity. It’s a nonstop rap — he barely seems to draw a breath for over three minutes, finding rapid-pace rhythm in his rhymes — but the production and his singsong tone keeps the track buoyant. And there’s a bigger message at play, too. Bennett, who came out as bisexual last year, is trying to make a statement about not letting cultural norms hold you back.

“To be black in America, to come from a background where typical masculinity comes first at all costs and being the first to disrupt the norm, is so scary,” he explains to TIME. “You know, it’s very, very, very hard to be yourself — but even more difficult to be yourself and still be the most powerful person or version of yourself in a room.” Here, Bennett discusses some of the inspirations he’s had for this project and why bisexuality in the black community can be an especially thorny subject.

“Be Yourself” covers a lot of territory, exploring your youth, your family, your identity. What do you want listeners to learn about you after listening to this song?

Something that I want for not just children but all my listeners — no matter if you’re gay, straight, white, black, rich or poor — is understanding the power of being yourself. As children, very early we’re pressured into automatically being a part of groups. I want kids to understand that being yourself is important. [In] America, we have extremely high suicide rates and a lot [of that] stems from feeling like you don’t belong, feeling isolated. And the problem is that everybody around you is so selfish.

Why the title “Be Yourself”? What inspired you to put together this project?

I was very inspired by Young Thug. He’s a good friend and talented recording artist. I stayed with him in the studio for two days while I was on tour. Man, I’ll tell you, there’s nobody that’s harder-working — and also nobody that’s more comfortable with being themselves. Expressing all your feelings seems impossible — or at least I would like to think so — for many African Americans. While I stayed with him, nobody was judged based off anything they were wearing, the way they talked… it was literally a safe, carefree community, which I don’t feel really exists for African Americans.

There’s no space growing up I could go to and feel that if I didn’t talk a certain way, everything was going to be okay. Growing up, people told me I talked white. That’s a really big stereotype; if you talk proper it’s as if I’m undeserving of identifying with my own culture. Experiencing that environment with Thug let me know that as an artist in this industry, especially with everything going on in America in 2018 — cops senselessly killing black kids, gay nightclubs being massacred in Miami and schools being shot up every week — there’s no better place and time for a project to inspire.

You know, this is not really a story at all. I wanted to bring a round-table discussion about the insecurities we have. When I say be yourself, I don’t mean be gay, be bi, be lesbian, be queer, be any of that. I mean: know who you are, love your body, love what you do, like what you like — express yourself openly. There’s so many people whose dreams are limited. They’ll never know the places they can go, the possibilities that they have because they’re constantly trying to be shaped and molded into someone that the world is creating them to be. I want people to realize you’re made the way you are for a reason and you’re perfect. You value yourself and expand your capabilities the more you let that show.

Growing up on the south side of Chicago, I was not open about my sexuality for a long time. Being a rapper, being in the industry, going to classical schools, and really getting exposure to different opinions and lifestyles made me want to use my music platform as a vehicle to talk about something that is very often shaded in American history.

I think a lot of people often think that there is a problem with the hip-hop community and the LGBTQ community — and I think that’s wrong. I think the bigger issue is between the black community and the LGBTQ community. Back in the day we marched and fought for civil rights together. Dr. Martin Luther King, Jr. and Bayard Rustin worked together; he was a key adviser to Martin Luther King, Jr. in the 1960s. He was arrested for his own civil disobedience and for being gay. He continued to fight for equality alongside Dr. King and the LGBTQ community, before people of color identified with the LBGTQ community, as we know it today. I think that in addition to mass incarceration, the AIDS epidemic in the African American community has really separated us and become an issue we’ve essentially been left to handle alone. These things have become so disruptive that to be black and to be gay or bisexual has kind of become its own race.

So there’s many years of anger, confusion and unspoken words for the black community and the LBGTQ community. That’s why I wanted to tell this story. There are gay black artists who have publicly announced their sexual orientation, but never a bisexual African American artist who not only wants to speak his own truth, but also use his platform to raise a much larger conversation than likes and clicks to get to the root of the issue.

What do you think is the most important part of this song?

I think in order to be yourself, you have to be okay with not always being the coolest. My mom scratching [her] lottery tickets, my friends passing away, my brother and I both getting famous and that relationship coming from the playpen, being openly bisexual, being judged for it… Persevering through it, being a survivor, and an example for others that it’s possible for you to be yourself too — that’s the most important element of this song. Because when someone sees that someone has stepped into the light so comfortably, they’ll do it too. The more people that are okay with stepping into this light, being uncomfortable and having this discussion, the more accepting we can be as a community and advanced as humans. 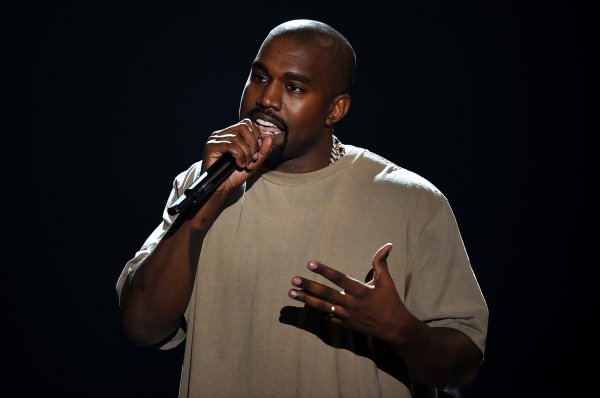 'It's Not a Disability, It's a Super Power.' Kanye West Opens Up About His Mental Health And New Album
Next Up: Editor's Pick