It’s not going to be a quiet summer off for the students of Marjory Stoneman Douglas High School. With the school year ending, many of the Parkland school shooting survivors are taking their political activism on the road.

The students are embarking on a two-month, nationwide bus tour dubbed March For Our Lives: Road to Change, the group announced Monday. They plan more than 50 stops in 20 states to rally young voters and campaign to end gun violence. They are also planning to visit every congressional district in Florida.

Parkland student Cameron Kasky and recent graduates Emma Gonzalez and David Hogg will join other classmates and young activists from around the country on the tour. The first stop is in Chicago on June 15.

Marjory Stoneman Douglas students hold a press conference on June 4, 2018 in Parkland, Fla. to announce that this summer the students of March For Our Lives are making stops across America to get young people educated, registered and motivated to vote, calling it "March For Our Lives: Road to Change"
Taimy Alvarez—Sun Sentinel/TNS/Getty Images

At a news conference Monday, Kasky said one of their biggest missions on the tour is to educate voters. “We can march. We can bring our politicians into a new light and make sure they are being held accountable. But at the end of the day, real change is brought from voting,” he said. “The best thing you can possibly do is vote.”

The tour comes after 17 students and staffers were killed in a mass shooting at Marjory Stoneman Douglas High School in Parkland, Fla. on Feb. 14. The students’ impassioned responses to the massacre immediately spurred a national debate on gun violence and reinvigorated calls for new gun control laws.

“We’re going to places where the NRA has bought and paid for politicians who refuse to take simple steps to save our lives — and we’ll be visiting a number of communities that have been affected by gun violence to meet fellow survivors and use our voices to amplify theirs,” the group said in a statement.

In March, hundreds of thousands of people descended on Washington, D.C. to participate in the March For Our Lives demonstration, which was led by the survivors of the Parkland shooting.

“We showed our politicians that we refuse to accept gun violence as an unsolvable issue,” the organization’s website says. “Now it’s time to turn our energy into action.” 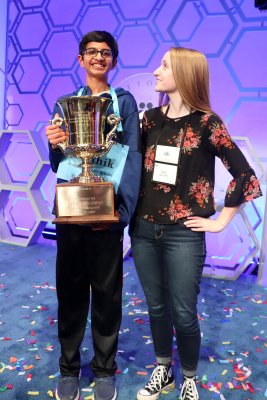 Here's What It Takes to Win the National Spelling Bee
Next Up: Editor's Pick