At Least 99 People Died and 197 Are Missing in Guatemala's Fuego Volcano Eruption. Here's What to Know

At least 99 people are dead and 197 are still missing after Guatemala’s Fuego volcano erupted on Sunday, sending lava flows into nearby rural communities and spewing ash over people and towns. It was the country’s most deadly volcanic event in more than a century. Only 23 of the victims have been identified at this point.

Here’s what you should know about Guatemala’s Fuego volcano:

What happened at Guatemala’s Fuego volcano?

The Fuego volcano erupted at about noon local time on Sunday. Thick clouds of smoke and ash billowed into the sky, and homes in nearby villages were engulfed by lava flows. Temperatures in the lava flow reached 1,300 degrees Fahrenheit, according to Eddy Sanchez, director of the country’s Seismology and Volcanology Institute. The institute said on Sunday evening that the eruption had ended but another one was possible.

The second explosion came Tuesday, with authorities issuing another evacuation order and closing a national highway as hot gas and molten rock descended down the volcano’s southern face. A red alert remained in place Wednesday and people were advised not to stay near the affected area.

Dramatic footage from Sunday showed a group of people fleeing pyroclastic flow — a fast-moving mixture of hot ash, lava and gas — as it tore down a bridge.

Where in Guatemala is the volcano?

The Fuego volcano is only 27 miles southwest of the capital Guatemala City, and ash has reached as far as the city’s airport, forcing it to close.

At its peak, the Fuego reaches 12,346 feet above sea level and it is one of the most active volcanoes in Latin America. It sits on the Ring of Fire, a 25,000-mile horseshoe-shaped area where several tectonic plates rub against each other, creating intense volcanic activity and earthquakes. Three quarters of the world’s active volcanoes can be found on the Ring of Fire.

The Fuego volcano is 27 miles southwest of Guatemala City.
Google

How many people are affected by the volcano?

The national disaster agency, CONRED, said the ash fall would affect 1.7 million people across the country of 15 million. More than 3,000 have been evacuated from areas threatened by the lava flows and photos show distressed locals fleeing barefoot and covered in mud and ash.

The death toll stood at 99 on Wednesday after nine more bodies were covered, AP reports. But the number of fatalities is expected to rise, as authorities were unable to account for at least 197 people still listed missing. On Tuesday, Sergio Cabanas, the director of Guatemala’s disaster agency, said that some people believed to be missing could be among recovered bodies that could not be identified.

Earlier in the week, eighteen bodies were found in the community of San Miguel Los Lotes, according to disaster agency spokesman David de Leon. Photos of the village show bodies partially buried in ash.

Almost 300 people have been injured.

It was the deadliest eruption in the country since 1902, when thousands were killed by an eruption of the Santa Maria volcano

How have authorities responded?

Hundreds of rescue workers have travelled to villages near the volcano to help those trapped inside their homes and to search for bodies. CONRED opened temporary shelters for those who were forced to flee.

But as rescue efforts push past the 72-hour mark, the chances of locating survivors is dwindling, according to a spokesperson for CONRED, as the blanket of ash covering the region has been hardened by rainfall, making it more difficult to dig through to reach people trapped by the eruption. Many local residents are thought to have been caught off-guard by the rapid lava flows, combined with hot ash and volcanic gas, which can cause asphyxiation.

Authorities warned that rain could also increase the risk of landslides of ash, mud, and other debris. Search efforts were temporarily suspended Wednesday afternoon due to the threat of rain and debris flows.

“We don’t rule out the possibility of some person alive, but the condition in which the homes are makes that possibility pretty unlikely,” said Julio Sanchez, according to AP. 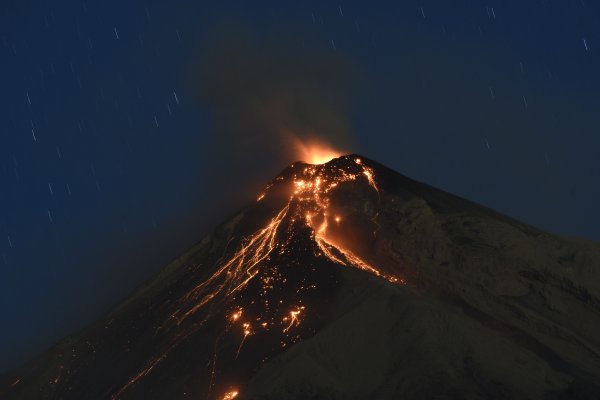 Volcanoes in Guatemala, Hawaii and Indonesia Have Killed 62 and Cost the Economy Millions. Should We Expect More?
Next Up: Editor's Pick