Giuliani Says Trump Has the Ability to End Mueller's Probe And Pardon Himself. But He Won't Do Either

President Donald Trump has “broad powers” that include the ability to terminate the Russia probe and pardon himself, his lawyer Rudy Giuliani said Sunday on NBC’s Meet the Press.

“Constitutionally it sure looks that way,” Giuliani said when NBC News’ Chuck Todd asked him whether Trump could end Special Counsel Robert Mueller’s investigation into possible collusion with Russia by Trump associates during the 2016 election

But Giuliani added that Trump would likely not exercise those powers, specifically pardoning himself if he did face any charges connected to Mueller’s investigation, due to the “unthinkable” political ramifications.

“It could lead to impeachment,” Giuliani said, referring to the idea of Trump pardoning himself. “If he terminated an investigation of himself it could lead to all kinds of things.”

The former New York City mayor also said only Congress can hold the president accountable, but Giuliani reiterated that Trump has done nothing wrong and did not obstruct justice. Todd asked him to clarify whether he was making the case “that [Trump] didn’t obstruct or that a president cannot obstruct justice.”

“You might want to say he has very broad powers and somebody who wants to question that under Article Two has a big, big burden of showing that there is no innocent explanation for what he did,” Giuliani responded. “They just can’t do that. So I would like to convince them to exercise some, you know, constitutional restraint here.”

Giuliani also confirmed that Trump still wants to testify to Mueller, but his legal team has advised him not to do so. 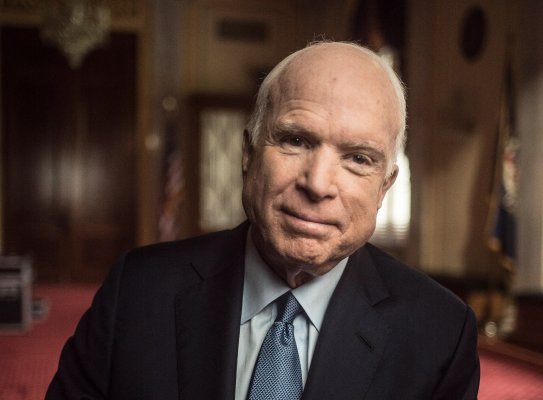 The Moving Way John McCain Honored Sailors Killed on the Ship That Bears His Name
Next Up: Editor's Pick