One week after abruptly canceling a meeting with North Korean leader Kim Jong Un, President Donald Trump announced the June 12 summit is back on. But he tamped down expectations that one meeting will be enough to solve all the problems between the two nations.

“I think we’re over that, totally over that, and now we’re going to deal and we’re going to really start a process,” Trump told reporters Friday afternoon of the escalating rhetoric that led to the cancellation. “We’re meeting with the Chairman on June 12.”

Trump predicted the upcoming meeting in Singapore would likely be the first of many. “Hey, wouldn’t it be wonderful if we walked out and everything was settled all of a sudden from sitting down for a couple of hours,” Trump said. “I don’t see that happening. But I see over a period of time.”

Trump’s reversal came after more than an hour with Secretary of State Mike Pompeo and Kim Jong Un’s top aide in the White House Friday. Kim Yong Chol delivered a personal letter to Trump from the North Korean leader. Speaking to journalists after the North Koreans departed, Trump initially said the letter was “very nice” and “very interesting,” but minutes later said he had not read the letter yet and didn’t open it in the meeting, joking that he could be in for “a big surprise.”

Trump said the lengthy conversation Friday “went very well” and called it “a get to know you kind of a situation.” He said he thinks that North Korea is willing to denuclearize, and he said he and Kim also discussed the possibility of formally ending the Korean War.

Trump said he has more sanctions he’s prepared to put on North Korea, but he struck an optimistic tone about the thawing relationship, partially evidenced by the fact that Kim Yong Chol is the highest-ranking North Korean official to visit the U.S. in 18 years. “I think they’re OK,” Trump said of relations between the two nations. “I think they’re good.” 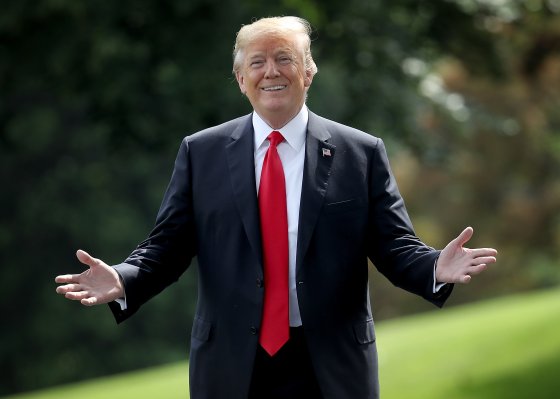 Why Trump's Tweet About the Jobs Report Was So Risky
Next Up: Editor's Pick