Trump seemed to suggest it was a “total double standard” that Bee hadn’t been fired when Roseanne Barr’s show was cancelled by ABC following her racist tweet. Barr posted a tweet comparing Valerie Jarrett, a former President Barack Obama adviser, to an ape. “A total double standard but that’s O.K., we are Winning, and will be doing so for a long time to come!” Trump tweeted.

“Bob Iger of ABC called Valerie Jarrett to let her know that ‘ABC does not tolerate comments like those’ made by Roseanne Barr,” Trump tweeted Wednesday. “Gee, he never called President Donald J. Trump to apologize for the HORRIBLE statements made and said about me on ABC. Maybe I just didn’t get the call?”

“I would like to sincerely apologize to Ivanka Trump and to my viewers for using an expletive on my show to describe her last night. It was inappropriate and inexcusable. I crossed a line, and I deeply regret it,” Bee wrote on Twitter.

Shortly after Bee’s apology, TBS issued a statement accepting that it had been a mistake to air the comedian’s words. “Samantha Bee has taken the right action in apologizing for the vile and inappropriate language she used about Ivanka Trump last night. Those words should not have been aired. It was our mistake too, and we regret it,” the statement read. 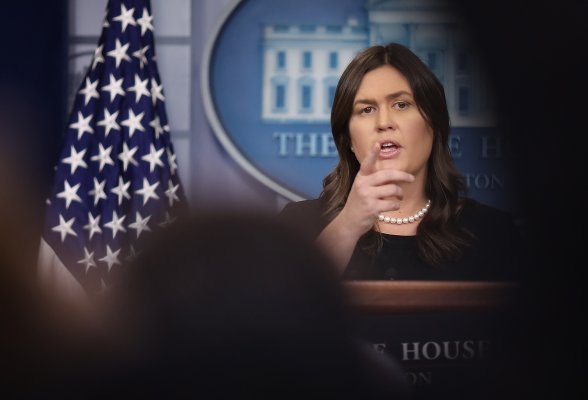 TIME for Kids Reporter Shares What It Was Like Asking Sarah Huckabee Sanders About School Shootings
Next Up: Editor's Pick