The President’s Pardon Might Be About More Than Dinesh D’Souza. Just Look at Trump’s Own Legal Trouble

Ideas
By Paul S. Ryan
Ryan is Vice President for Policy & Litigation for Common Cause.

President Donald Trump has announced that he’s pardoning conservative commentator Dinesh D’Souza for federal campaign contribution limit violations that D’Souza pleaded guilty to in 2014. Meanwhile, the President’s personal lawyer Michael Cohen is under investigation by the Department of Justice (DOJ) for similar federal campaign finance law violations. The nonpartisan organization I help lead, Common Cause, alleged those violations, related to the 2016 Stormy Daniels hush-money payment funneled through Cohen, in complaints filed with the DOJ and Federal Election Commission (FEC) in January. Recent statements by the President’s lawyer Rudy Giuliani implicate Trump himself in these campaign finance law violations.

Federal campaign finance law limits how much a person can give to a candidate. In 2012, the limit was $2,500 per election, with the primary and general elections treated as separate elections. Federal law clearly states that “no person shall make a contribution in the name of another person.” This provision, known among election lawyers as the “straw donor” ban, is the most basic of campaign finance law. You can’t get around the contribution limit by having your friends contribute your money and saying it’s theirs. If you could, contribution limits would be meaningless.

The contribution-limits and straw-donor ban serve the interests of everyday people. They make it harder for wealthy individuals and special interests to corruptly buy political access and influence the rest of us can’t afford, and they ensure that the public knows whose money is really funding political campaigns. D’Souza’s $20,000 “straw donor” contribution reimbursement scheme clearly violated laws that protect democracy. He was properly prosecuted. It was no surprise that he pleaded guilty.

President Trump, in announcing his intention to pardon D’Souza via a tweet, claimed that D’Souza “was treated very unfairly by our government!” Before pleading guilty, D’Souza argued to the court that he was a victim of politically motivated “selective prosecution.” But the court rejected the argument, ruling that there was “no evidence” to support D’Souza’s allegation.

Fast-forward to 2018. In January, the public learned through some great investigative journalism that in October 2016 then-candidate Trump’s personal lawyer paid adult-film star Stormy Daniels $130,000 to stay quiet about an affair she allegedly had with Trump years earlier. The payment occurred mere weeks before the presidential general election. Daniels was negotiating with major media outlets to go public with her story, and the Trump campaign was reeling from the Access Hollywood tape scandal. Strong evidence suggests that Cohen’s payment to Daniels was for the purpose of influencing the election and, consequently, an illegally large in-kind contribution from Cohen to the Trump campaign.

Several weeks ago, Rudy Giuliani revealed that President Donald Trump reimbursed Michael Cohen for the $130,000 payment to Stormy Daniels. Trump then acknowledged his reimbursement of Cohen on his personal financial disclosure form. Trump’s reimbursement of Cohen is strong evidence that the President knew about Cohen’s payment to Daniels at the time it occurred or soon thereafter — and that the President knowingly and willfully caused his presidential campaign committee to violate the law by failing to disclose this political expenditure to Daniels, the in-kind contribution from Cohen and his reimbursement to Cohen on the committee’s reports filed with the FEC. Knowing and willful violations of campaign finance laws are obvious criminal acts.

In early April, the F.B.I. raided Cohen’s office and home, executing search warrants and seizing millions of documents and digital records as part of the DOJ’s investigation into possible campaign finance law violations by Cohen. At this very moment, the President’s lawyers and Cohen’s lawyers and DOJ lawyers are battling over which of these millions of records can become evidence in the DOJ’s investigation and which are shielded by the attorney-client privilege between Cohen and Trump.

In other words, President Donald Trump and his lawyer Michael Cohen are facing serious campaign finance law problems. The President’s pardon of Dinesh D’Souza looks like an effort to dismiss his own apparent violations as no big deal. But violating campaign finance laws is a big deal, and no one is above the law — not even the President. 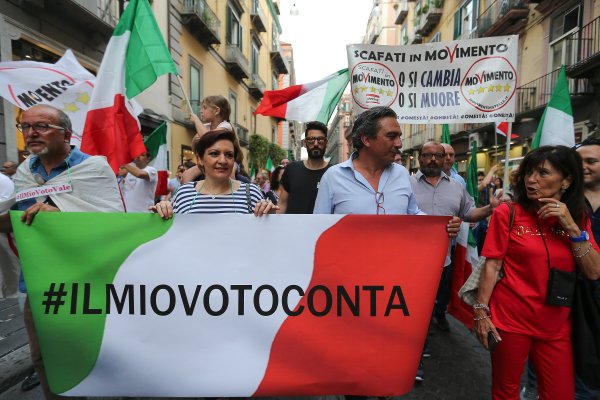 What the EU Should Learn From Italy’s Political Crisis
Next Up: Editor's Pick