President Donald Trump’s net worth has fallen to its lowest point since the 2016 presidential election, according to a new appraisal by Bloomberg. It currently sits at $2.8 billion, down $100 million from last year.

The Bloomberg analysis attributes the drop to falling revenue at his golf courses and resorts and Trump Tower in Manhattan. Among the properties to report losses is Mar-a-Lago, the Florida compound dubbed “the Winter White House” where Trump has held a number of high-profile meetings since taking the Oval Office.

While a number of Trump’s properties have depreciated since he became president, the new Trump International Hotel in Washington, D.C., a haven for lobbyists and administration officials, has reported profits. In its first year open, Bloomberg reported it was valued at $100 million — up $30 million from last year.

Trump’s revised 2018 net worth of $2.8 billion does not qualify him for Bloomberg’s annual tally of the world’s 500 richest people. Trump has claimed his net worth exceeds $10 billion.

Though Trump has dismissed Bloomberg’s analyses in the past, theirs is not unique: in October 2017, Forbes reported that Trump’s net worth had fallen by $600 million over the previous year.

Despite these fluctuations, Trump remains by many estimates the richest president in U.S. history, and the only president to ever qualify as a billionaire. 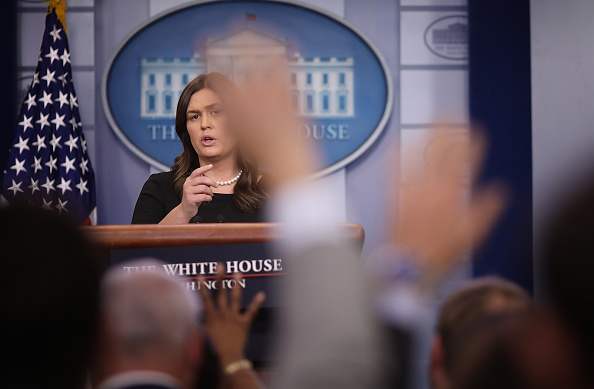 Sarah Sanders Chokes Up After Question From Student
Next Up: Editor's Pick