Ivan Duque Is Colombia’s Right Wing Answer to Macron, and He’s Poised to Win the Presidency

Iván Duque is on track to succeed Juan Manuel Santos as President of Colombia, after winning national elections on May 27. But with 39% of the vote, the right-wing Senator did not secure a large enough majority to avoid a runoff battle on June 17 with Gustavo Petro, a leftist former guerrilla, who won 25%. Now Colombia faces a stark choice between hard left and hard right:

Just 41, the former lawyer has spent much of his adult life in the U.S., studying at Georgetown University and working at the Inter-American Development Bank in Washington, until former President Alvaro Uribe asked him to return to run for Senator in 2014. With just one term under his belt, Duque is seen as inexperienced but also free from the corruption allegations that dog Colombia’s political elite. He has been nicknamed the Colombian Macron by Spanish-language media for his perceived similarity to the upstart President of France.

Duque gained notoriety for fierce attacks on Colombia’s 2016 peace agreement with Marxist guerrillas the Revolutionary Armed Forces of Colombia (FARC). The deal ended 52 years of civil war, which left 220,000 dead and displaced up to 7 million, but many felt it was too lenient on the militant group. Duque wants to scrap key parts of the agreement, including a partial amnesty for crimes committed by the FARC.

Analysts are not ruling out a second-round victory for Petro, whose railing against wealth inequality won him more votes than any other left-wing candidate in Colombian history. But Duque’s market-friendly stance and promises to cut corporate taxes appeal to those in the center worried by the country’s sluggish economic growth. And with the economic crisis in neighboring Venezuela having sent more than a million migrants pouring into Colombia in search of jobs and food, the country is widely expected to follow Argentina and Brazil in a Latin American rejection of the populist left. 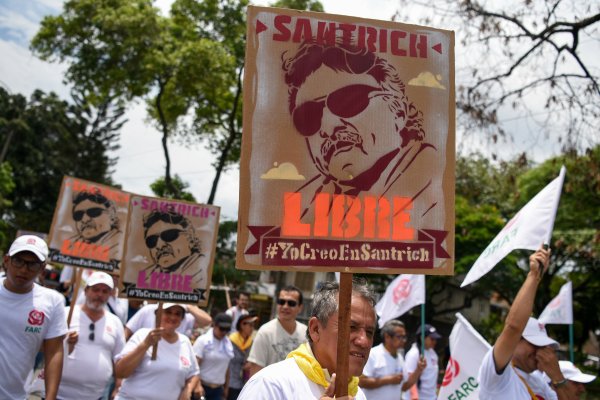 Why Colombia’s Fragile Peace Is Tied to the Fate of an Ex-Guerrilla Leader
Next Up: Editor's Pick