Why is now the time to write a history of energy?

We are undergoing probably the largest energy transition in human history. We are facing the need to decarbonize our entire energy supply. And no one seems quite prepared to take it seriously.

Your book recounts multiple energy transitions and calls the current move away from fossil fuels the “ultimate transition.” How is it different?

What does this difference mean for how the transition is experienced by everyday people?

It’s a bit like putting the frog in the hot water. It’s hard to see this change coming. It creeps in around the edges.

Do the past energy transitions you write about suggest we should be able to transition again?

Fundamentally, when people have to use new kinds of energy, they resist it. To the extent people are capable of opening up their minds to new kinds of energy, we’ll be better off. I wanted to cover so much ground, to open up the conversation again and to look at how people have managed these changes before. But the human species has always been a clever little species. I can’t believe we won’t work our way through this one, but we’re going to have to get on our horses and get riding.

You say in the book that you don’t advocate any one particular solution, but you must have a sense of what you think the solution should be, right?

We have to turn to sources that don’t produce carbon. That means renewables. But we’re going to need to use everything we’ve got, and in particular nuclear power.

You have advocated for nuclear energy for some time now, but you weren’t always a supporter. What changed?

I changed my mind because people I respect deeply as scientists and moral human beings taught me that nuclear power was an important new source of energy, with the caveats that are there for any source of energy.

Have you noticed a change in public opinion in recent decades?

Yes, and it’s changed for the better. But [nuclear energy] has become such a divisive issue–and not for the best of reasons.

In your book, you deal extensively with one of those reasons. Namely: fears that nuclear power could support overpopulation. What was your reaction to that?

I was appalled. Nuclear got a bad reputation among those who thought that helping out the starving millions and billions of people in Asia would just prolong the agony. It was an incredibly anti-human response. That really was the early years of the environmental movement–however well-meaning it came to be. It got a bad rep because it promised to power the teeming millions.

Has the current political climate made it difficult to deal realistically with the energy transition?

One of the real tragedies right now is that the two parties have lined up along the lines of the robust basic energy sources vs. renewables. It makes it harder to have a discussion based on reality, rather than political gains. Nuclear power is one of the first energy sources to be radically delayed by politics. 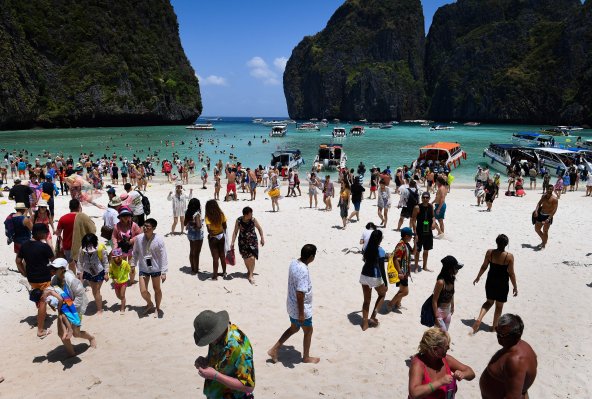 We've Ruined the Beach From Leonardo DiCaprio's 'The Beach'
Next Up: Editor's Pick