On May 25, nearly eight months after more than 70 women accused him of sexual harassment and assault, Harvey Weinstein entered New York’s First Precinct — just a few blocks from his old Tribeca office — and turned himself in.

The scene was carefully curated, like something out of one of the former producer’s Oscar-winning films. Weinstein wore a baby blue sweater, a soothing color that evokes the innocence of childhood. He carried books about art and filmmaking to remind viewers he’s an artist first. Later, in court, he pleaded not guilty to raping one woman and forcing another to perform oral sex, and on Thursday he was indicted by a Grand Jury.

The police, too, set up an important shot of their own: the perp walk. Pointedly, a female detective led a cuffed Weinstein out of the precinct. The day offered just a preview of the spectacle that will play out on a national stage over the next several months. Both sides know that the Weinstein trial is the first installment of a series of dramas that will feature other accused men.

What we’ve watched up until this point has been its own genre: the revenge fantasy. The people who came forward in October with allegations against Weinstein — including actors Ashley Judd, Gwyneth Paltrow and Lupita Nyong’o — kick-started the #MeToo movement. Women from all walks of life took to social media to expose the men they said had abused them. The movement had, and continues to have, real potency. In May, Visa suspended an ad campaign with Morgan Freeman and Missouri Governor Eric Greitens was pressured to resign after each of them faced allegations of sexual misconduct. Whether their disgrace will be permanent is unclear. Men such as Kevin Spacey and Bill O’Reilly are still banished from film and media, and have decamped to their mansions. (In Weinstein’s case it was an Arizona rehabilitation center that offers meditation and equine therapy.)

Now Weinstein’s story could end in prison, rather than at a retreat, and the rest of us will get to witness something often frustrating, but perhaps more satisfying: a courtroom drama. The justice system has been slow to act on #MeToo claims, and Weinstein is the first major celebrity arrested since the wave began. (He’s also still under investigation in London and Los Angeles.) This is where the strength of the social-media movement will be put to the test.

Justice is swift on Twitter. But the American legal system is notoriously slow. In April, three years and two jury trials after New York magazine featured Bill Cosby’s many accusers on their cover, the actor was convicted of sexual assault. His appeal could take years.

What lost Weinstein his job, his company and his reputation was the sheer number of women who spoke out in articles, in op-eds and on Twitter. It’s not certain how many of those women will be allowed to testify during his trial to establish a pattern of bad behavior. Those types of testimonies proved powerful at the sentencing hearings for both Cosby and Team USA gymnastics doctor Larry Nassar. The last thing Weinstein’s attorneys want is to have woman after woman take the stand to recount Weinstein’s alleged misconduct.

As Ashley Judd recently wrote for TIME, Weinstein’s arrest shouldn’t have been a surprise: “A sexual predator being legally accountable for criminal behavior is and should be normal, routine and not particularly newsworthy.” And yet the arrest did signal a shift in the #MeToo movement. Many men accused of criminal behavior lost their careers, but they didn’t risk losing their freedom. Now the justice system is stepping in.

Weinstein maintains that his sexual acts were consensual, and as his lawyer put it on the day of the arrest, “Mr. Weinstein did not invent the casting couch in Hollywood.” It’s true that he was not the only one whose unethical–and allegedly criminal–behavior was an open secret. Spacey is currently under investigation for sexual misconduct, as are celebrity chef Mario Batali and actor Ed Westwick.

It’s clear now that #MeToo was the prelude, a catalyst for a new story. This tale will have many twists and turns. Former New York Attorney General Eric Schneiderman filed a civil rights lawsuit against Weinstein in February before Schneiderman himself resigned after being accused of physical abuse by four women. (He denies the allegations.) There will be distractions and appeals. There will be civil suits, like the one Judd recently filed against Weinstein.

But this new chapter began with Weinstein in handcuffs. The police insisted on them, adopting Weinstein’s own flair for the cinematic and symbolic. As disgraced men like Charlie Rose and Matt Lauer reportedly plot comebacks, those handcuffs send a clear message: #MeToo is only the beginning. 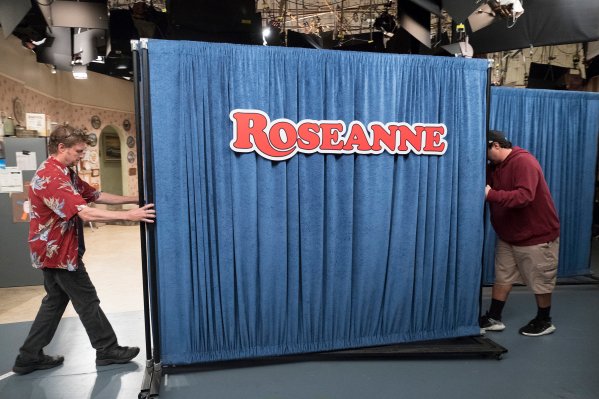 Roseanne Barr Meets the New World
Next Up: Editor's Pick