Feuds are an integral part of rap: artists gain notoriety, win fans and develop followings on the power of their diss tracks and clapbacks. The latest two rappers to rise to the fore of the feud landscape are Drake and Pusha-T, who over Memorial Day weekend began trading insults back and forth. Pusha-T (real name: Terrence LeVarr Thornton) is hot off the heels of releasing a new seven-track album, Daytona, on May 25, while Drake (real name: Aubrey Drake Graham) has been hyping up the June drop of his expected album Scorpion, the follow-up to 2017’s chart-blasting More Life “playlist.”

Drake and Pusha-T have a long history of beef, dating back to the early 2010s and inter-label disputes — mostly Pusha-T tracks that criticized Drake for his loyalty to Lil Wayne and suggested a connection to a ghostwriter. (Drake’s label boss Lil Wayne is not a Pusha-T fan.) That sparked a back-and-forth between the two artists for years.

The association made headlines on Friday, however, with Pusha-T’s Daytona release. The closing song, “Infrared,” takes shots at Drake: “It was written like Nas but it came from Quentin,” he raps, making a reference to Quentin Miller, who Meek Mill alleged ghost wrote a number of songs for Drake. Miller has denied that allegation in the past.

In response, Drake released his own freestyle rap on Soundcloud, “Duppy Freestyle,” on May 26. “I’m in shock,” he starts off the top. “The nerve, the audacity.” Then he rebuts Pusha-T’s claims, making digs at the other rapper’s talent and relationship to Kanye West. (Pusha-T says West, currently in the midst of his own controversial moment around comments he’s made on Twitter, guided Daytona. Pusha has said that he disagrees with West’s politics.) “Don’t push me when I’m in album mode,” Drake warns in “Duppy Freestyle.” “You not even top 5 as far as your label talent goes / You send shots, well, I got to challenge those.” He signed off asking to be compensated for the free publicity: “Send the invoice for the extra 20…”

Pusha-T fanned the flames by tweeting out Drake’s song, with that final lyric as his tweet. Drake responded by sharing an Instagram of an invoice for $100,000 for “promotional assistance and career reviving,” to be paid by G.O.O.D. Music/Def Jam (Pusha-T and West’s label) to OVO Sound, Drake’s label.

That, however, was not the end. On Tuesday, Pusha-T released “The Story of Adidon,” another diss track rapped over Jay-Z’s “The Story of O.J.” beat. The art for the song appears to be a picture of Drake in blackface, wearing a shirt and hoodie emblazoned with cartoon Jim Crow images. Some, including Billboard, have speculated that the image was originally intended as a form of social commentary, possibly by a Toronto clothing brand. Devoid of context, the photo proved jarring to many.

But later on Wednesday, Drake took to Instagram to address the picture, explaining the photo from 2007 was taken for a project centered on “how African Americans were once wrongfully portrayed in entertainment.”

As for the rap in the track itself, “The Story of Adidon” is full of increasingly personal digs at Drake, including the assertion that Drake has a secret child. He also calls out Drake’s dad, his producer’s battle with multiple sclerosis and Drake’s own racial identity. “Let’s have a heart-to-heart about your pride / Even though you’re multi, I see that your soul don’t look alive,” Pusha-T raps. “Confused, always felt you weren’t Black enough / Afraid to grow it ’cause your ‘fro wouldn’t nap enough.”

Representatives for both Pusha-T and Drake declined to comment to TIME for this story. 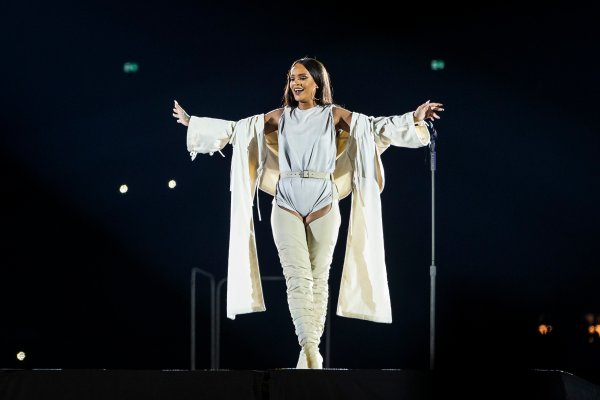 Here Are the Best Songs to Help You Get Over a Break Up
Next Up: Editor's Pick