Roseanne Barr Had a History of Racist Tweets, Conspiracy Theories and Controversy Before Roseanne Was Canceled

ABC canceled Roseanne after Roseanne Barr attacked former White House adviser Valerie Jarrett in a racist tweet that compared her to an ape, saying Barr’s tweet was “abhorrent, repugnant and inconsistent with our values.” But Barr’s tweet was hardly the first time the comedian drew controversy; the Roseanne star had a history of controversial comments and incidents before Tuesday that ranged from inflammatory to racist.

ABC’s abrupt cancelation of Roseanne— a revival of the 1990s hit that was a ratings smash for ABC and drew praise from conservatives and President Donald Trump — as well as Barr being dropped by her talent agency, ICM, marks the first major consequence Barr has faced after years promoting conspiracy theories and making racist comments online.

Roseanne Barr tweeted "muslim brotherhood & planet of the apes had a baby=vj" in response to a tweet about Valerie Jarrett, a top aide to former President Barack Obama. Jarrett is black
Twitter

Barr’s comments date back to long before the show was revived. In the months prior to Roseanne‘s revival premiere, Barr even said her children took away her social media accounts to stave off any offensive screeds.

Here are some of Roseanne Barr’s more controversial comments and actions.

Barr’s tweet referencing Jarrett, who she said is what you’d get if the “muslim brotherhood and planet of the apes had a baby,” was not the first time the Roseanne star has made racist comments toward black women. In 2013, Barr said former National Security Advisor Susan Rice was a “big man with swinging ape balls” in a since-deleted tweet.

Barr has espoused fringe conspiracy theories and false statements, including one that incorrectly said Chelsea Clinton was married to a nephew of the investor George Soros. Barr also called Soros a Nazi and accused him of wanting to “overthrow” the “constitutional republic.” Barr later apologized to Clinton for falsely asserting that she is married to him.

Earlier this year, Barr shared a conspiracy theory about Trump that claims he has freed hundreds of children who are the victims of sex trafficking by breaking up their rings. The theory goes back to the message board 4Chan, where an anonymous user who goes by QAnon has spread the incorrect information, according to CNN. Prior tweets by Barr also point to her involvement with QAnon — The Daily Beast reports she asked to be put in touch with him in late 2017 and she has tweeted about the user on numerous other occasions. Other unfounded theories Barr has weighed in on include Pizzagate, Spygate and the death of Democratic National Committee staffer Seth Rich.

Barr has also made Islamophobic comments, including an attack on former Hillary Clinton adviser Huma Abedin, whom she called a “jew hater” and “filthy nazi whore” in 2016, according to The Daily Beast.

Beyond Twitter, and even at the heyday of Roseanne in the 90s, Barr has always been controversial. In 1990, she shrieked and yelled through the national anthem during baseball game and responded to boos from the crowd by spitting on the ground and grabbing her crotch.

In 2009, Barr reportedly asked the satirical Jewish publication Heeb magazine to pose dressed as Adolph Hitler in the spread. The writer, Oliver Noble, wrote that Barr told him she “may, in fact, be the reincarnation of Adolf Hitler, whom she has requested to be dressed as for her Heeb photo shoot.” 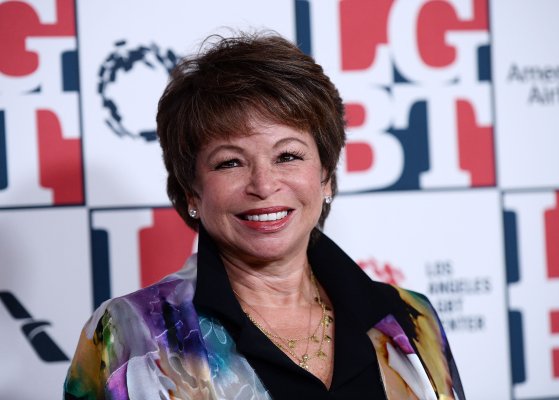 How Valerie Jarrett Responded to Roseanne's Racist Tweet
Next Up: Editor's Pick