One Northern California-based Starbucks barista said she contemplated leaving her job after the controversial arrest last month of two black men sitting at a Philadelphia location of the coffee chain for several minutes without having purchased anything.

That employee, an African-American woman who asked TIME to remain anonymous due to concerns of losing her job, was angry. And when Starbucks later announced more than 8,000 stores across the country would participate in racial bias education training, she didn’t understand why.

“I was angry we had to educate people on how to not be racist,” she recalled in an interview with TIME Tuesday night shortly after attending the hours-long training that shuttered nearly all of Starbucks’ U.S. locations.

But, after completing Starbucks’ racial bias training program Tuesday afternoon with her coworkers, the California-based barista felt her perspective had changed. “I’m a black woman; I’ve already known all of this,” she said, referring to one section of the program that detailed living day-to-day in public spaces as a person of color. “But the fact that it was a video all employees had to watch, it really warmed me.”

More than 175,000 Starbucks employees participated in the mandatory racial bias education program Tuesday afternoon at thousands of U.S.-based locations as part of an initiative spurred by the high-profile incident in Philadelphia last month. Gathered around a few iPads at locations around the nation, Starbucks employees watched nearly two dozen videos featuring the rapper Common, documentary filmmaker Stanley Nelson, Starbucks executives and other prominent figures, while participating in wide-ranging discussions about race and identity with their colleagues. The curriculum, released in full by Starbucks online Tuesday night, placed an emphasis on encouraging some employees to become “color brave” instead of “color blind” and meditated on the Starbucks’ responsibility as the “third place” for some members of the community, akin to a home and workplace.

TIME spoke with five Starbucks employees on what it was like to attend Tuesday’s training sessions. These employees shared differing perspectives on the impact of the curriculum and detailed how effective they each thought it truly was.

Jason, the only African-American employee at his Hollywood-based Starbucks location who asked TIME to identify him by his first name out of concerns over job security, said the program reiterated common conversations surrounding race like inclusion, acceptance and understanding. But he said the training failed to address how to end instances like what happened in Philadelphia from occurring in the future. While a number of the videos featured the perspectives of people of color — and particularly African-Americans — Jason wrote in a message to TIME that “there were times where I felt they missed the mark.”

“It seems like a lot of talking from the videos,” he added, “and not enough discussion from us.”

Employees said they were also given workbooks that included prompts for them to discuss their first experiences with racial identity and discuss in pairs questions like, “What makes me, me? And you, you?” The company also gave employees personal journals to write in and keep for the months ahead. The curriculum as a whole, Jason said, could have used some improvement.

Jason was not alone. Mohamed Abdi, an employee at a Starbucks location in Alexandria, Virginia, told TIME he wished the program featured more discussions between coworkers as well. “Honestly I think they should have more hands-on courses speaking to different people and customers to figure out where they’re coming from,” he said. “It’s easy sitting through something and saying you learned something than actually learning something from the course,” he added.

His reception of the course, however, was generally positive. He particularly enjoyed the documentary produced by Stanley Nelson that displayed “the different things people of color go through just by leaving the house day by day.” That video featured an array of people of color who discussed how they access and experience public spaces than their white peers. (“When I go into stores, sometimes I get followed,” one woman said in the video. “Especially being a teen of color, they assume that you’re doing something bad.”)

The California-based, female employee told TIME that same video strongly resonated with her and — at one point — almost drove her to tears. “I often find myself even at other Starbucks locations where I don’t work at, and when I say I’m a partner, they look at me a certain kind of way,” she said in a phone interview after her store’s training session Tuesday night. “Just the fact that they really touched on that, it definitely made a lot of people in my job who work with me understand better.”

Ryan Curran, a white employee at a Sewell, New Jersey, location, said he and his coworkers learned a lot from the Starbucks training and wouldn’t change anything about the curriculum. “It would be helpful to continue the program when needed, for example, if a problem occurs in a certain store,” he said.

Alicia, a Starbucks employee at a location in San Jose, Calif., who asked to keep her last name confidential, said the training felt less genuine. As a Mexican woman, Alicia had hoped the session would be more inclusive for employees from all background and said it instead focused on the “white barista-young black male customer interaction.”

“They told us we need to be ‘color brave’ instead of color blind and it was the whitest thing I’ve ever heard,” she said, describing a journal and discussion portion held mid-way through the session. “Me and my coworkers of color felt uncomfortable the entire time.”

An Arkansas-based Starbucks employee who asked to remain anonymous out of concern over her employment, said she couldn’t imagine the curriculum would have much of an impact. “While this may be the most cost efficient way to handle the situation, I don’t feel like it will change much of anything,” the employee told TIME over text message before the training started. She added that the store she works at initially didn’t plan on closing for Tuesday’s training, but eventually did once Starbucks’ higher ups stepped in. “Just driving an hour down the road takes you to towns where racism is alive and well,” she added.

According to estimates detailed by USA Today, Starbucks likely lost around $12 million by closing its U.S.-based stores on Tuesday afternoon. Since announcing it would close down the afternoon of May 29 for the training, Starbucks has emphasized the session was just the beginning of a long-term commitment to diversity and combating racial bias. Researchers and social scientists recently told TIME that a one-time education program isn’t enough to combat racism and eradicate the use of racial biases. Hours before the programs began on Tuesday, Starbucks Executive Chairman Howard Schultz said the company plans to globalize these efforts and make similar initiatives part of the on-boarding process for new employees.

Indeed, in the weeks after Donte Robinson and Rashon Nelson were arrested at the Philadelphia location, Starbucks implemented new policies that allow people to sit in stores or use their bathrooms without purchasing anything. Hakeem Jefferson, a political science doctorate student at the University of Michigan who will join Stanford University’s faculty in the summer, told TIME ahead of Starbucks’ training day that structural and systematic changes like these policies could help prevent “negative outcomes” of unconscious biases manifest themselves.

Starbucks’ curriculum, the company has said, is a launching pad for further initiatives as well as a tool for other companies to refer to and a program that may be used in the on-boarding of new employees in the future. But while movements within a company like Starbucks come as the result of a high-profile, racially charged incident, “I think we should worry that that doesn’t lead to the kind of change that we might want,” Jefferson, the social scientist, said.

“This has to be a core component of every company’s mission, particularly in an increasingly diverse world.”

This story has been updated. 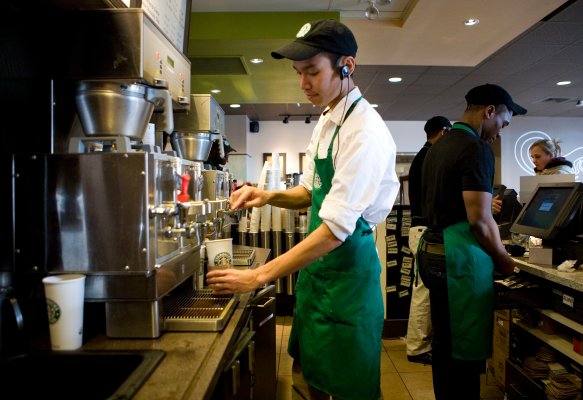