The year may feel like it’s just heating up over the radio waves, but 2018 has already given us a slew of new releases to celebrate. From surprises like Childish Gambino and Drake to harbingers of ingeniously effective album rollouts from Ariana Grande and Janelle Monáe, the first half of the year has offered an embarrassment of musical riches. Here are our picks for the best songs released in 2018 — so far.

Childish Gambino, “This Is America”

When Donald Glover unexpectedly released “This Is America” in early May, audiences weren’t ready. Not for his searing, pointed commentary; not for the unexpected mashup of musical genres and beats; and certainly not for the incendiary video that came along with it. Glover’s song deserves a second listen for its sheer creativity and shock value. But it’s the insidious, dark beat matched against a floating chorus that has kept it at the top of charts and, ultimately, made it into a complex and powerful musical statement well suited to a time of social agitation.

Cardi B feat. Bad Bunny and J Balvin, “I Like It”

Cardi B just missed last year’s list with “Bodak Yellow,” released in June 2017 — but thanks to the release of her long-awaited debut album Invasion of Privacy this April, she had plenty more hits up her sleeve for 2018. “I Like It” shines thanks to its smart use of a wildly danceable boogaloo sample, its trap and salsa foundations and the amped-up contributions of Puerto Rican rapper Bad Bunny and Colombian reggaeton phenomenon J Balvin. As a spiritual successor to dance floor hits like “Despacito” and “Mi Gente,” “I Like It” gets added kick from Cardi’s signature delivery, filled with personality. The fact that the song is mostly in Spanish only elevates its global appeal.

Drake, “Nice For What”

In preparation for the release of his forthcoming album Scorpion, Drake put out something of a feminist manifesto in “Nice For What.” Reminiscent of previous hits like “Hotline Bling,” the song is both upbeat and chilled out. The savvy move here is the Lauryn Hill sample, which gives “Nice For What” a throwback vibe with melodic balance. And since this is Drake, the song also comes complete with eminently quotable lyrics.

With “Done For Me,” off his sophomore album, soulful pop crooner Charlie Puth proves that his ability to write an earworm (see: 2015’s Wiz Khalifa collaboration “See You Again”) is smartly matched with his love for old-school jazz and funk beats. “Done For Me,” with a feature from singer Kehlani, is equally smooth and groovy, a duet about romantic angst that still gets your toe tapping.

Tom Misch feat. De La Soul, “It Runs Through Me”

British singer-songwriter-multi-instrumentalist Misch is more of a jazz musician than anything else — and for that, as evidenced by the masterful, relaxed “It Runs Through Me” off his April debut Geography, listeners are fortunate. Over a slinky bossa nova beat, Misch and featured hip hop group De La Soul deliver a seductive hit of soulful music, letting the instruments and Misch’s silky voice steal the show.

In her sophomore album and accompanying “emotion picture” Dirty Computer, Janelle Monáe set out to subvert listeners’ expectations over precise, unimpeachable funk-R&B production. “Pynk” is Monáe at her best. With collaborator Grimes, an indie-pop favorite, Monáe sends up a new type of anthem: an unabashed celebration of female anatomy, interpreted by many as an ode to queer love, delivered with lyrical winks and an artful video. It shines thanks to its bright, future-pop synths and sugar-sweet vocal delivery.

Scottish DJ Calvin Harris is a hit-making machine, working this time with pop star Dua Lipa to deliver a summer jam of clubby ’90s beats and smooth vocals. A groovy play on deep house, Dua Lipa’s rich voice floats easily over the up-tempo, woozily danceable backing track, resulting in a song that’s as irresistible as it is uncomplicated in message.

With this take, Frank Ocean breathes new life into the 1961 Henry Mancini classic. Piling on layers off-kilter vocals, he stretches and manipulates the subtle melody and its nostalgic lyrics into a work that feels of another era — neither old nor current but something experimental and new. An extended outro of 20 seconds of near silence drives home Ocean’s ability to give us music that is spacious and searching, always reaching for an elusive rainbow’s end.

Electronic duo Beach House has been making elusive, dreamy alt-pop for well over a decade. On their seventh album, aptly titled 7, “Lemon Glow” stands out for its dark, almost grating beat and swelling, atmospheric composition. It’s just direct enough to get stuck in your head, but also just weird enough to keep you coming back to listen for its many hidden pleasures.

As the lead single for her hotly anticipated upcoming album, powerhouse pop singer Grande reintroduced herself with a song that wraps its core — an emotional, orchestral ballad with plenty of space for her voice to shine — with a club-worthy beat. Both reflective and celebratory, production from master hitmaker Max Martin helps Grande achieve that tricky pop alchemy. 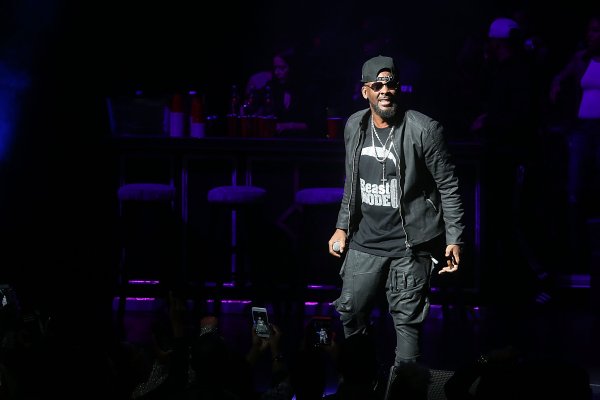