Why Tommy Robinson Was Jailed, and Why U.S. Rightwingers Care

Since Friday, the case of British far-right activist Tommy Robinson has spread across the globe, with the hashtag #FreeTommy gaining traction among his followers from Australia to the U.S.

The right-wing campaigner was arrested and jailed on Friday outside a controversial trial in northern England. Hundreds have since taken to London’s streets, thousands have signed a petition calling for his release, and several high-profile Americans, including actor Roseanne Barr, have tweeted their support for him.

Here’s what you need to know about the case:

Who is Tommy Robinson?

Tommy Robinson is the pseudonym of Stephen Yaxley-Lennon, a far-right activist in the UK who founded a group called the English Defense League in 2009, which aimed to counter what it called “Islamism” in the U.K., and also set up a British branch of the German anti-Islam group Pegida in 2016.

He is active in the global far-right, writing and broadcasting for Canadian far-right channel Rebel Media and his arrest on Friday on suspicion of breaching the peace outside a court in the U.K. attracted tweets of protest by right-wing activists and commentators around the world.

Actor James Woods tweeted Saturday, asking for information about Robinson’s arrest and Roseanne Barr replied, “he has tried to report on rape gangs being protected in UK. He was just arrested-which is a death sentence-please get involved! it’s sick pedo sh-t [sic]”

Robinson was arrested outside a trial in Yorkshire, in the north of England, and has since been sentenced to 13 months in prison for contempt of court, according to The Independent, which was only able to reveal the sentence Tuesday after a judge removed a reporting restriction on Robinson’s case.

Why was he in contempt of court?

The law in England and Wales places restrictions on what can be reported during trials in order to avoid prejudicing a jury, and in this case the media was forbidden to report any details. The case centers on rape and trafficking allegations against 29 defendants, and has attracted significant attention from far-right activists.

On Friday, Robinson filmed a Facebook Live video outside Leeds Crown court in northern England while defendants entered. According to reports about the live stream, which went on for around an hour, Robinson was attempting to confront defendants as they entered the court building, and talking about details of the trial. He was arrested for a breach of the peace, and taken away by police.

By filming defendants and discussing details of the trial while broadcasting via a livestream, Robinson was breaking the court-ordered restriction on media. As he was already serving a suspended sentence for filming outside another trial in May last year, he was jailed for 13 months.

In the U.S., reporting on ongoing trials is usually protected by the First Amendment.

Why has the arrest gained global attention?

The news that Robinson had been sentenced to jail time was shared across social media throughout the weekend, and protests by his supporters in London demanded his release, with hundreds showing up outside Downing Street, chanting “shame on you.”

However it was not until Tuesday that media outlets were able to report on Robinson’s sentence due to a reporting restriction, put in place for fear of influencing the trial Robinson was live streaming outside.

Many have painted Robinson’s arrest as anti freedom of speech, with several high profile right-wingers sharing messages comparing him to Gandhi. Video of the protests in the U.K. have been widely shared across social media, as has footage of supporters holding smaller sympathy protests in Australia, Tel Aviv and Germany.

Robinson has become well-known in the global far-right movement for his protests against what he calls “the Islamisation of our countries” and his recent arrest has provoked sympathetic responses from far-right groups in the U.S., including Alex Jones’ Infowars.

In Europe, several far-right politicians criticized Robinson’s jailing, with Geert Wilders, leader of the Netherlands anti-Islam Freedom party, comparing the U.K. to Saudi Arabia and German lawmaker Petr Bystron of the far-right Alternative for Germany party suggesting he wanted to help Robinson get asylum as a “political prisoner.”

Supporters in the U.K. also set up a petition online, titled “Free Tommy Robinson,” with descriptions in eight languages—English, French, Spanish, German, Italian, Polish, Czech and Russian. At time of writing it had reached 470,494 signatures, with a target of 500,000. 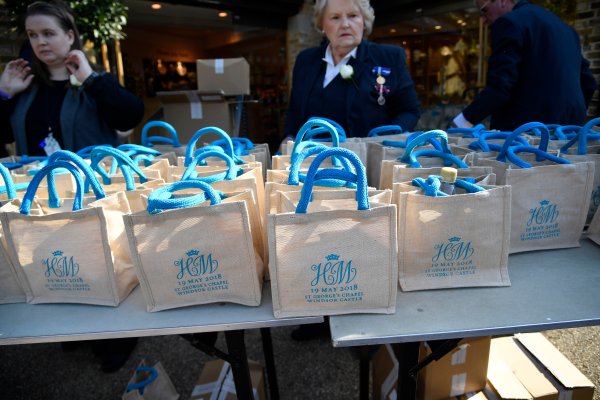 Royal Wedding Guests Are Reselling Their Gift Bags on eBay
Next Up: Editor's Pick