Ideas
By David C. Kang
Kang is Maria Crutcher professor of international relations and director of the Korean Studies Institute at the University of Southern California. His latest book is 'American Grand Strategy and East Asian Security in the 21st Century' (Cambridge, 2017).

Despite President Donald Trump canceling the proposed meeting with North Korean leader Kim Jong Un, a U.S.-DPRK summit is still likely to happen. Both sides clearly want a summit to take place. However, whether it still takes place on June 12, or whether it takes place later, North Korea in particular is in a better position today than it was six months ago, and the U.S. bargaining position is weaker.

In the current environment, there is almost no possibility of returning to Trump’s policy of “maximum pressure” through economic sanctions; support for any type of “bloody-nose” U.S. first strike to shock Pyongyang has largely evaporated; and the U.S.—not North Korea—appears the truculent negotiating partner.

The past few days of U.S.-DPRK relations have been dizzying. Last week, Pyongyang began to show signs of backing out of the summit, attacking President Trump and in particular his National Security advisor John Bolton, who suggested North Korea follow “the Libya model” of denuclearization. On Thursday, President Trump released a letter he had sent to Kim Jong Un, canceling the June 12 summit scheduled for Singapore, citing North Korea’s unrelenting hostility as the reason.

Pyongyang responded by taking the high road, with the foreign ministry saying they remained open to meeting with the U.S. By Friday, Trump had begun to talk about the summit possibly still happening, saying, “We are in contact with North Korea.” On Saturday, North and South Korea met for a second time at the demilitarized zone that separates the two countries, with South Korean president Moon Jae-in and the North Korean leader spending two hours talking face to face. And then on Tuesday, a top North Korean aide headed to the U.S. for talks.

Yet the events of this week have not caused the panic that typically accompanies developments in U.S.-North Korea relations. The world is different today than it was six months ago—and North Korea’s position today is also markedly different.

Both sides clearly want the summit to happen. Both sides have enormous popularity gains to earn from a meeting, on the world stage and back home. In the U.S., Trump has decided that he will solve the North Korea problem in ways that his predecessors have not. By so publicly making North Korea a priority, and then making initial progress, President Trump has invested a significant amount of energy into the issue. It is unlikely that he would walk away now with almost nothing to show for it.

For North Korea, the first summit with a sitting president since the Korean War not only offers Kim tremendous legitimacy and prestige, it also provides the chance to improve a major relationship. Both the U.S. and North Korea are taking pains to show they are not desperate for a meeting, even while they show a willingness to talk. For Pyongyang, to even be considered to be a valid negotiating partner of the U.S. is a huge improvement in its status. As a result, it is likely that at some point, some type of meeting will take place.

North Korea has benefited in other ways from the prospect of a summit. Even if it does not happen, there are few options left to the U.S. for applying pressure in the short run. South Korea and China widely consider North Korea to be the more engaged partner. Pyongyang has made a range of concessions in the past six months, almost none of which could have been predicted last year: it declared a voluntary halt to long-range missile tests, attended the Pyeongchang Olympics, declared its nuclear test site at Pyungge-ri closed, released three U.S. citizens arrested and held in North Korea, and pledged to be open to denuclearization in some form.

Given these North Korean concessions, a renewed U.S. attempt to implement even harsher economic sanctions will probably not find support in the U.N. or in the region. China and South Korea have expressed a willingness to engage the North diplomatically and even economically, even while U.N. sanctions remain in place.

Furthermore, as long as North Korea is not actively provoking the U.S. with long-range missile tests, any suggestion of a U.S. “bloody nose” strike will appear unwarranted. It is hard to imagine a scenario where even the most hawkish American advisors are able to convince the president to start a potentially horrific war in the absence of any provocations on the North Korean side.

For the time being, engagement and diplomacy appear to be making progress on the peninsula. If the summit fails to materialize, the U.S. will have few other policies or options available. North Korea is in a better position now than it was before. 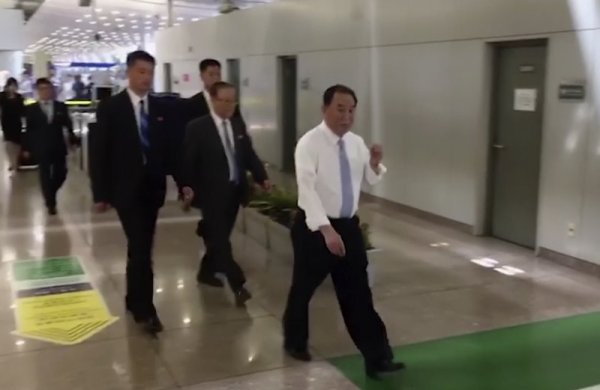