California police say they have arrested two people for abducting and attempting to deport a 21-year-old foreign flight school student.

Tianshu “Chris” Shi, was being driven to the airport on Friday morning when his family called the police.

Shi, 21, told the Record Searchlight that he arrived in the U.S. seven months ago on a vocational visa to study at the IASCO Flight Training program in Redding, Calif.

One of several Chinese nationals enrolled in the program, Shi said his own school, the Civil Aviation Flight University of China, paid approximately $70,000 for him to train there. Yet he’s been grounded, or unable to fly, for the past two months, he suspects because of his limited English skills.

A former IASCO flight instructor last year filed a federal lawsuit alleging that the program’s Chinese students did not speak enough English to fly safely, according to the Washington Post. Two instructors now appear to have taken matters into their own hands.

According to a police statement, pilot Jonathan McConkey and his assistant Kelsi Hoser arrived at Shi’s dorm around 11 pm last Thursday and told him to pack his things. When McConkey, reportedly the school’s manager, and Hoser came back at dawn the next day, Shi recorded the altercation.

“If you cannot speak English, you are not going to be able to stay here,” a woman’s voice says on the audio recording, according to Searchlight.

A man is then heard heard cursing at Shi and threatening to break his arm.

Police said McConkey “battered” Shi, while the student said the pilot violently grabbed him and bent him over a kitchen island.

Before agreeing to get in their van for fear of his safety, Shi contacted his brother in Shanghai, who alerted the Redding police in time for an airport intervention.

“At that moment, police is my Jesus,” Shi said.

According to Searchlight, at least one other student at IASCO experienced a similar attempted deportation.

McConkey and Hoser were booked on suspicion of conspiracy and kidnapping. 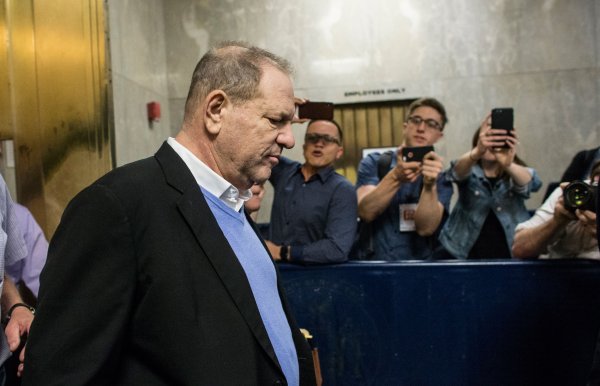 Harvey Weinstein Could Face Even More Charges. Here Are All the Investigations Looking Into Sexual Assault Allegations
Next Up: Editor's Pick