The group’s Love Yourself: Tear opened at number one on the Billboard 200, selling 135,000 total albums in its debut week, Billboard reports.

“It’s the first No. 1 for the seven-member group, and the first K-pop album to lead the tally,” wrote Billboard in its online report on the latest chart ranking.

The album, sung predominantly in Korean, is also the first primarily foreign-language No. 1 album in more than 12 years.

The Billboard 200 chart ranks the most popular albums every week in the U.S.

From their colorful haircuts to their mesmerizing dance moves, the boyband is a global sensation that has achieved a massive fanbase in Japan, China, Southeast Asia and parts of Latin America.

One data analysis found that BTS was the most talked about subject on Twitter in 2017, whose number of mentions doubled that of President Trump and Justine Bieber combined, Agence France-Presse reports.

BTS’ last album, Love Yourself: Her, opened at number seven in October 2017, according to Rolling Stone. 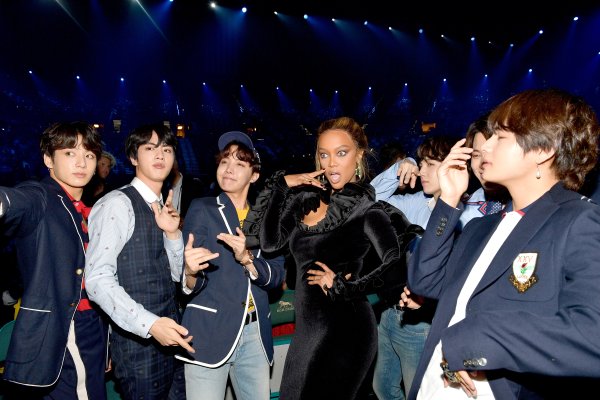 Tyra Banks Struck a Pose with BTS and Outed Herself as a Fan
Next Up: Editor's Pick